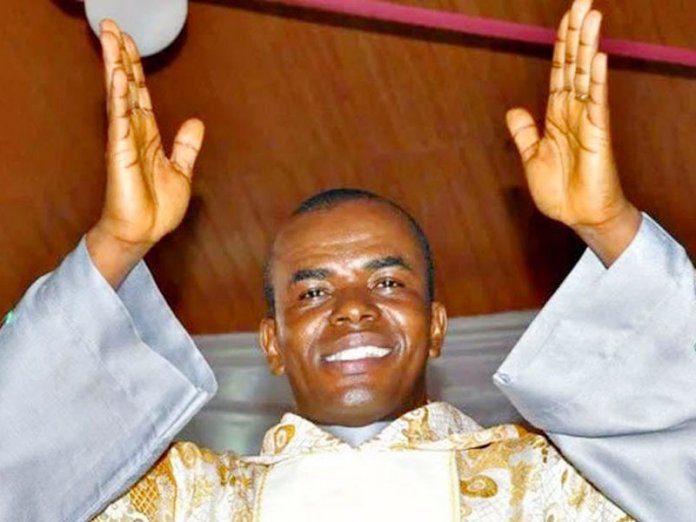 Since 2015, Rev. Fr. Mbaka has found intimacy with political harlotry but in a very treacherous and malicious manner unbecoming of a priest. As a fellow Catholic priest, I am embarrassed by Fr. Mbaka’s materialistic and opportunistic gambling in the name of prophecy, and the condoning silence kept over his merchandise by those who should stop him, especially his superior and boss, Bishop Onaga, who, for very strange reason, seems to look away.

Unlike the Catholic Church that usually cautions her ministers when they err and derail, Fr. Mbaka operates like the independent and autonomous pastors of the new generation churches who freely act uncontrolled and unchallenged.

Many suspiciously argue and believe that he is paying his episcopal due to gag and make those who should caution him to look away from his abuse and excesses. Otherwise, no one would have ordinarily created the disgraceful public scene he did with Peter Obi prior to the 2018 elections and remain intact with his priestly faculty. This is a burden of question on the episcopal integrity.

As a priest and citizen, Fr. Mbaka deserves the right, and in fact, the responsibility and duty in conscience, to speak on the politics of the state, especially, in solidarity with the oppressed masses and how they will be liberated from the clutches of the ruling oppressive aristocrats. What is worrisome is that, in his gambling prediction, Fr. Mbaka patronizes the negative and failure and those that oppress the common man.

In his prophecy, he is rather confident in the function and triumph of corruption in Nigeria, and always calculates carefully where the pendulum of the power of political manipulation and corruption would have victory and pitches his prediction there. If it coincidentally works, then, he becomes an acknowledged true and genuine prophet. This is common with most Nigerian pastors.

Accordingly, in the case of his present ranting against Ihedioha and Imo state, it is easy to read his malicious mind in the logic of that calculation. He simply believed that, since President Buhari is APC, and the entire tool of the Supreme Court is at his command, and since Hope Uzodimma is APC, it was likely that, in the Nigerian characteristic, the Supreme Court and the President certainly and corruptly tipped in favour of Hope and APC. Why did he not predict in favour of AA that came second in the election and is the imagined stronger contender than APC, or in favour of APGA that is futile contender, but both of who are not APC and ruling party?

It is easy to know that Fr Mbaka always predicts and forecasts on three factors, namely, the advantage of our presumed conventional corruption, the advantage of incumbency and thirdly, his bias against those that refuse to yield to his netting money trap. For instance, in 2015, he merely cashed on the conspiracy and overwhelming disenchantment against GoodLuck Jonathan and incited the populace against him to legitimize his prediction. Yet, he failed in his prediction to prove that the alternative to Jonathan would be better and the panacea for Nigeria.

In fact, his “prophecy” resulted in a doom incomparable to Jonathan’s era and made it a reminiscing nolstagia. Again, in 2019 election, he simply calculated and imagined that either for the advantage of the power of incumbency or use of the Supreme Court, APC and Buhari will certainly have their way, even without winning the election. And again, by not yielding to his intimidation to satisfy his thirst for money, Peter Obi’s wise retreat to fill his pocket, added to the factor of his selfish prediction. He then cashed on these factors to predict that PDP will lose the election. But then, it is still questionable if APC won the 2019 election, except for the intimidation and the gratuitous declaration of their supreme court as his gambling hoped for and clicked.

This means that Fr. Mbaka confidently believes and supports the factors of corruption and happenstances in Nigerian politics and actually exploits it for his cheap material prediction. Like his fellow “men of God” and miracle charlatans, knowing that the benefit of the doubt in Nigerian politics is always in favour of incumbency, corrupt power, might is right and manipulation, they always conjecture in favour of these factors, and if per chance it works, as it does at times, they shine as popular prophets.

That does not in the least mean that his so called prophecy is genuine or comes from God. It is simply working on the combining coincidence and chances intimidation, the psyche and psychology of corruption and advantage of incumbency.

With the menace of the rampaging herdsmen ravaging his own state and other states of the federation, killing innocent Christians and Nigerians, one would have expected Fr. Mbaka to condemn and speak out against the injustice and evil of the ruling party, if he were of God. But he keeps sealed lips over the travails of the weak.

Or, has Fr. Mbaka made a secrete covenant with a certain part of Nigeria and religion, whose bidding he is spelled bound to protect? Prophecy is not about prediction, but mainly about condemnation of evil and warning against its consequences. But since doing this would not serve the interest of his pay masters and his insatiable vanity, it is better to be silent on evil than hurt the masters.

Imo state has gone through social and economic hell and near annihilation in the previous eight years of rule under the state APC ruling party. Any person having the milk of humanity in himself would have prayed and wished that no more evil agency rules the state, so that the citizens would have a sigh of relief.

That Fr. Mbaka is preferring and postulating his doom in favour of another evil agent, when the people were rejoicing for liberation, shows that he is only a sadist working for his money and cheap popularity.

It is believed that Mbaka’s favoured candidate has a luggage and burden of unsettled corruption charges and cases with the EFCC, even before the election.

How would anyone who claims to be of God, or a court that claims the integrity of justice prefer to upturn justice against him to serve political partisanship and beggarly proohecy?

But Fr. Mbaka is not only gambling against the fortune of Imo state but against the fortune of a certain people and clan he is ignorant of their myth and antecedent enigma as those who violate and demystify the masquerade. And that is where his tragedy lies. His commercial prophecy against Emeka Ihedioha may eventually become his undoing as all those who have threatened his root, both in religious and political circles had always laid prostrate and face down in shame.

In Nigeria, we worship religious sentiment than the truth. Otherwise, it is unlikely that many would still believe and patronize Fr. Mbaka after inciting the nation into leadership doom in 2015, and now, his last ‘false’ prophecy against Imo state and the lineage of Emeka Ihedioha. Perhaps, this is the time he would either resign as a priest as he once swore to, or lose his credibility or be cautioned by his bishop, or else, his commercialized and monetized gambling would remain validated and legitimized, and that would be unfortunate.