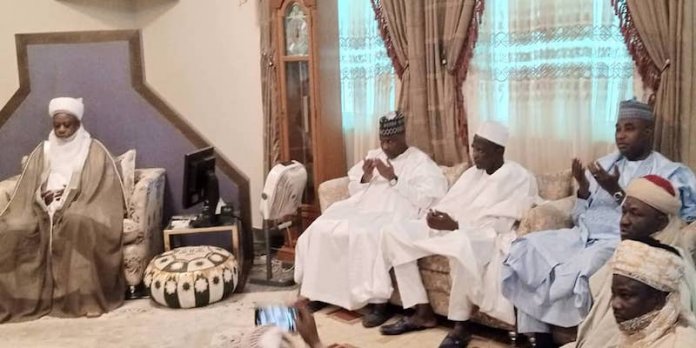 Governor Aminu Waziri Tambuwal of Sokoto has again called on the people of the state to remain united in pursuance of the collective good of all.

Gov. Tambuwal made the call when he paid a courtesy visit on the Sultan of Sokoto in his palace Tuesday.

“We ask all the people of Sokoto, irrespective of party affiliation to come and work closely with the government for further development of the state,” the governor said in a statement by his Special Adviser, Media and Publicity, Muhammad Bello.

Reaffirming his administration’s commitment to the Caliphate, which he said had never wavered in its support for his government, the governor specifically harped on the Sultan’s dexterity in mobilising the populace to pray for peace and good governance at all times.

“We are grateful to Allah and his eminence for his unflinching consistency in grassroots mobilization of the people of Sokoto to pray fervently for peace and development.

“It is worthy of note that your eminence has been in the forefront of ensuring that the state remains united despite all the myriads of political challenges, electoral hiccups and sundry litigations that have tugged at its stability,” Gov. Tambuwal observed.

He assured that the government will still continue to place premium on societal reorientation. investment in education, health and every developmental stride possible.

In his response, Sultan Sa’ad Abubakar appealed to all political gladiators in the state to set aside their differences and work together to achieve maximum benefits for the people of the state.

Noting that “there has never been a time in the history of our state that contentious politics almost crippled it like this one that was laid to rest by the Supreme Court,” the Sultan, who distanced the Caliphate from politics, sued for peace “as things have deteriorated significantly.”

He admonished all leaders in the state that whatever the situation they remain servants of the people. “All the people of the state are one for eternity. Power belongs to Allah. Anyone who gets it should be magnanimous and he who losses must not drag unnecessarily,”

He assured all parties that the Caliphate is home to all, adding that “the Sultanate will continue to give advice, solicited or otherwise to all the leaders in the state.”

He also drew attention to the fact that “the Supreme Court is not the final arbiter of all cases. Allah’s arbitration judgement is final and we should all strive to gain His favor.”