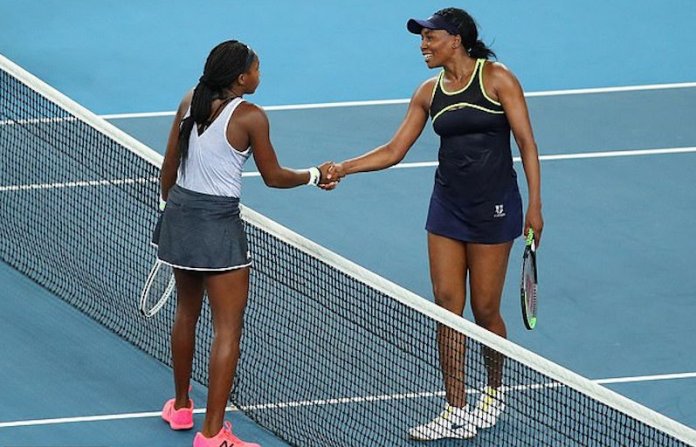 Just like happened at Wimbledon, Coco Gauff has repeated the feat with a defeated to Venus Williams in the first round at the on going Australlia Open tennis event.

Their meeting at the same stage of the Australian Open yesterday had more the feeling of a goodbye, there being a contrasting lack of surprise at the 15 year-old overcoming someone nearly 24 years her senior.

The older Williams sibling is a reduced figure these days, ranked 55 in the world, and although she put up some stiff resistance in the first set could not prevent herself going down to a 7-6, 6-3 defeat.

The 39-year-old was deliberately vague on what makes Gauff an outstanding prospect, but there was little arguing with her overall analysis: ‘She clearly wants it, works very hard, is extremely mature for her age,’ said Williams. ‘I think the sky’s the limit for her.’

Whether we will see the five-times Wimbledon champion in Australia again cannot be certain, although there appears little doubt that she will return to SW19 at least one more time.

She turns 40 just before this year’s event, but confirmed that she would like to be at the subsequent Olympics in Tokyo this summer: ‘In a perfect world I would play every time, I love it,’ she said.

Unfortunately for her there are a lot of Americans ahead of her in the pecking order, although the authorities are always ingenious when trying to get the biggest possible names in the field.

There is a world weariness about Williams when she talks in public, unlike Gauff, for whom everything remains fresh. The honeymoon seems far from over.

‘Everyone thinks I’m so serious because of my on-court (demeanour),’ she said. ‘Really I’m not. I don’t really take life too seriously. I mean, I just like to have fun.’

At a ranking already of 67 Gauff is clearly still improving, and felt she served better than when they met at Wimbledon. She now plays the experienced Romanian Sorea Cirstea, and the steely side of her nature will have to be to the fore.

‘If I go into a tournament thinking I’ll lose, then I’m going to lose,’ she said. ‘I respect everyone’s game and I respect my opponent, but at the end of the day if I’m going to go against them, I can’t say, “Oh, I’m going to lose this match.” That’s not the right mentality to have. I believe I can beat anyone.’

This was, in contrast to Wimbledon, hardly a shock result. Since her Indian summer of 2017, when she made two Grand Slam finals, Williams has been experiencing the law of diminishing returns as she heads towards her fourth decade.

She has not made the second week of a Grand Slam since, and has won only one match in her last four Majors. This match initially looked like a potentially embarrassing defeat until she revived somewhat in the middle of the first set.

There were no such problems for her sister Serena, who will face Slovenian Tamara Idansek after dropping just three games against Anastasia Potapova.

Serena was more concerned about dodging questions involving her close friend the Duchess of Sussex, a subject she is determined to avoid: ‘I have absolutely no comments on anything with that,’ she said. ‘But good try.’