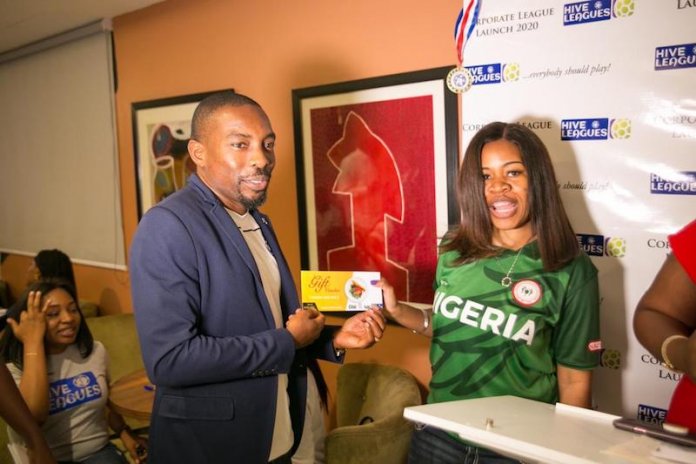 The much-anticipated event which was held at the Access VIP lounge of the snazzy Ebonylife Place Victoria Island was well attended with representation from the corporate, business and media world.

Some media notables in attendance were Blessing Nwosu and Niran Adesanya of Sports Café for Silverbird TV and Aron Akerejola of Arise TV to mention a few.

Henry Koko, The Hive Leagues’ Founder /CEO, offered insights into his passion for sports and the health benefits, explaining how his years of engaging in recreational sports, including football and tennis, had brought him enjoyment, wellness and fitness to him.

He diclosed that this passion drove the vision for The HIVE Leagues, as it was setup to provide platforms for everyday people to participate in organized recreational sports for enjoyment and wellbeing.

Mr. Koko mentioned that last year was a good one with the successful start-up of small sided leagues. According to him, the high point of 2019 was taking a team of Nigerians to participate in the 6-aside Socca World Cup in Greece in October 2019.

Henry ended with saying “In 2020, more leagues would be set up with provision for the working class and corporates. The company will provide opportunity for people including women to engage in other enjoyable recreational sports such as volley ball and handball with the aim of for the purpose of attaining wellbeing”.

The evening continued with engaging games such as sports bingo and others where the winners won vouchers from sponsors like Loshes Chocolate, Adono foods and Jojo Homemade, with lots of food and drink for the attendees.

A video clip on the impact of recreational sport on physical & mental health and productivity was also shared after which Co-founder and Director of Operations, Tara Koko, took the stage to shed more light saying “This year and going forward, the HIVE Leagues will provide solutions to Corporate organizations and businesses to aid them with their employee team building & productivity planning and execution”.

She went on, “Employees work long and hard hours in these times and also face long commutes and gridlocks that it is no surprise that many people break down physically or mentally”. She went on to say that even when companies decide to organize team building events to provide relief to their workforce, it was infrequent and the same employees who were already overloaded get saddled with the task of putting together the outing or event. She ended by saying that “recreation and team building activity have been scientifically proven to increase productivity of employees and this was very important particularly in today’s world’

The launch event drew to a close with a raffle draw for a dinner for two at a prestigious restaurant in Lagos, which Lara Martins a banker won. The CEO, Mr. Koko in closing the event by thanked everyone for attending. He also expressed appreciation to sponsors of the event; OPay, Guaranty Trust Bank and Gazmudu studios to mention a few. He left the podium with a call to action for people to avail themselves of The HIVE Leagues platforms where they could play recreational sport, socialize, get fit, healthy and attain wellbeing.