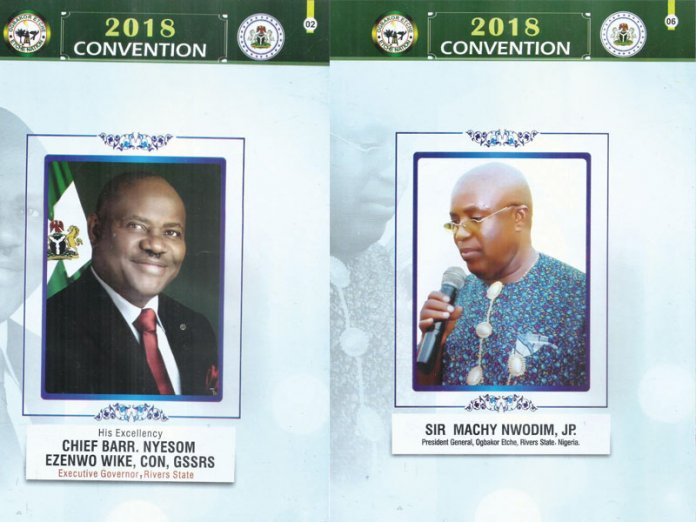 When the people of Etche in Rivers State paid a congratulatory visit to Governor Nyesom Wike in PortHarcourt recently, the bond of mutual affection between the visitors and theirhost was unmistakable. Chiemele Ezeobi reports

Etche nation in Rivers Statesboats ample political and economic potential. A major ethnic group in RiversState with enormous voting strength, key oil producing area, a strategic foodbasket, and the second place after Oloibiri in the current Bayelsa State, whereoil was discovered in commercial quantity in the country, Etche, undoubtedly, hasunique latent capacity waiting to be harnessed. This was the message that cameout very clearly on December 3, when representatives of the people, under theauspices of Ogbakor Etche, visited Governor Nyesom Wike at Government House,Port Harcourt. It was in a show of solidarity following his election for asecond term.

The reception took place inan atmosphere of camaraderie, with the dialogue conducted in a tone of mutual affection.

Wike became the firstgovernor ever to grace a convention of Ogbakor Etche when on December 26, 2018he honoured an invitation by the apex socio-cultural organisation of Etchepeople to the all-important annual gathering. The import of that history was not lost on the people during thecourtesy call on the governor.

“His Excellency did not onlyhonour our invitation, but his utterances and actions gave us, the EtcheNation, the hope that Etche now has a friend and brother, in the person of theGovernor of Rivers State, Chief Nyesom Wike,” Ogbakor Etche wrote in theiraddress to Wike.

They also underlined thegovernor’s support for the construction of Obiri Etche, the traditionalheadquarters of the Etche nation, at Umugwu-Okehi, which now wears a befittingnew look, complete with a 60KVA generator for constant power and a perimeterfence.

The people also presentedrequests to the governor. For their rich record of oil production, they askedfor greater involvement in the oil economy.

Following the recent decisionof the Rivers State Government to acquire the Oil Mining Lease (OML) 11 in theinterest of the host communities, Ogbakor Etche requested a similar arrangementfor OML 17, where most communities in Etche fall.

They requested the movementof the Faculty of Agriculture of the Rivers State University of Science andTechnology to Eberi, headquarters of Omuma Local Government Area, one of the twocouncil areas in Etche land.

The apex organisation askedfor the construction and reconstruction of roads in the area. And they talkedabout the activities of Ogbakor Etche and how the synergy with Onye-ishi-Etchein Council, the two local councils in Etche, and Etche America Foundation (EAF)was producing good fruits of infrastructure and development in Etche.

To reduce the propensity forelectoral violence, going by the experience of the last general election, OgbakorEtche proposed the adopted of electronic voting in future elections.

“May we use the opportunityof this visit to urge the National Assembly and INEC to ensure that theforthcoming general election in 2023 is through electronic voting,” theorganisation stated in the address signed by President General of OgbakorEtche, Sir Machy Nwodim, JP, and Secretary-General, Deacon Eleazar Kas-Nwogu. “Ogbakor Etche believes thatelectronic voting would have our sons and daughters protected from a rampagingwarfare in the name of elections.”

He promised to discuss thetransfer of the agriculture faculty of the state university to Model Secondary School, Eberi,with the university’s Governing Council Chairman and Vice Chancellor, sayingsuch movement would spur development in the area.

Wike disclosed that the Nihi-Odufor-Akporku-Obite-Umuoye road would becommissioned in May 2020.
He explained that OML 11belonged to Ogoni, Etche, Bonny, Oyigbo, Ogu-Bolo, and Okirika, saying theasset is acquired to protect the interest of the oil producing communities.

The governor sued for unityin Etche. He said that would create the conducive environment for betterharnessing of the area’s rich potential for its development. Wike then urged the OgbakorEtche team to select one major road project to be constructed by the state government.

The key takeaway message fromthe meeting of Wike and the Ogbakor Etche delegation seems to be that thegovernor and the people share similar opinions on effective communitydevelopment. As Kas-Nwogu put it, “Clearly, there is a meeting of minds betweenOgbakor Etche and the governor on the need for a bottom-up approach to ruraldevelopment.”