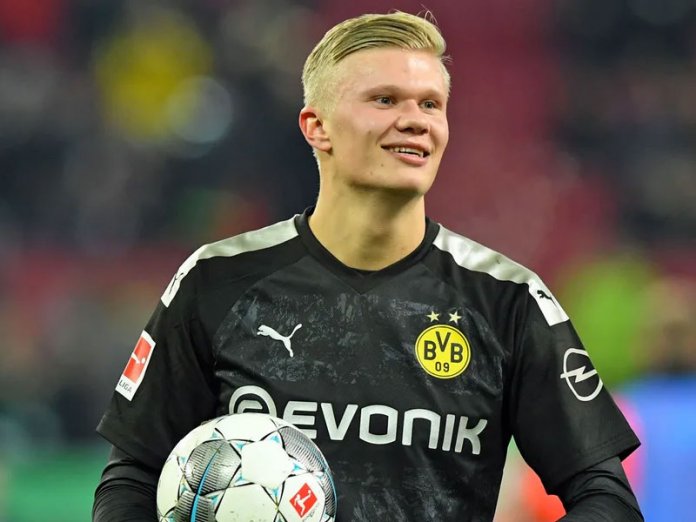 If anyone thought Erling Braut Haaland’s move to Borussia Dortmund would signal a tempering of his goalscoring exploits, the Norwegian proved them emphatically wrong on Saturday with a stunning 23-minute debut hat-trick.

The 19-year-old joined Dortmund for £17.1m last month, after netting 28 goals in 22 appearances for Red Bull Salzburg this season – a tally that included five hat-tricks.

He made that six courtesy of the perfect introduction to his new club and league.

Having come off the bench on 56 minutes, with Dortmund trailing 3-1, he scored just three minutes later, before England winger Jadon Sancho levelled the match at 3-3.

Haaland then put Dortmund ahead for the first time with 18 minutes left when he tapped home after Thorgan Hazard got in behind the Augsburg defence and completed his treble when captain Marco Reus played him into the area, slamming the ball home to make it 5-3.

“I am pretty relaxed about it, I don’t really know why,” the son of former Leeds, Nottingham Forest and Manchester City player Alf-Inge Haaland told reporters after his stunning Bundesliga bow.

“I’m at a fantastic club with great team-mates and good people around me. I came here to score goals and it was a good debut for me.”

Haaland, who had been a reported transfer target for Juventus and Manchester United, scored eight goals in this season’s Champions League group stage, the second most in the competition.

Augsburg had led 2-0 through goals from Florian Niederlechner and Marco Richter.

After Julian Brandt pulled one back for Dortmund, Niederlechner scored his second on 55 minutes before Haaland’s introduction.

Victory in the first game back after the winter break lifts Dortmund to fourth in the Bundesliga.

Leaders RB Leipzig extended their advantage to five points with a 3-1 victory against Union Berlin, after second placed Borussia Monchengladbach lost 2-0 to Schalke on Friday.