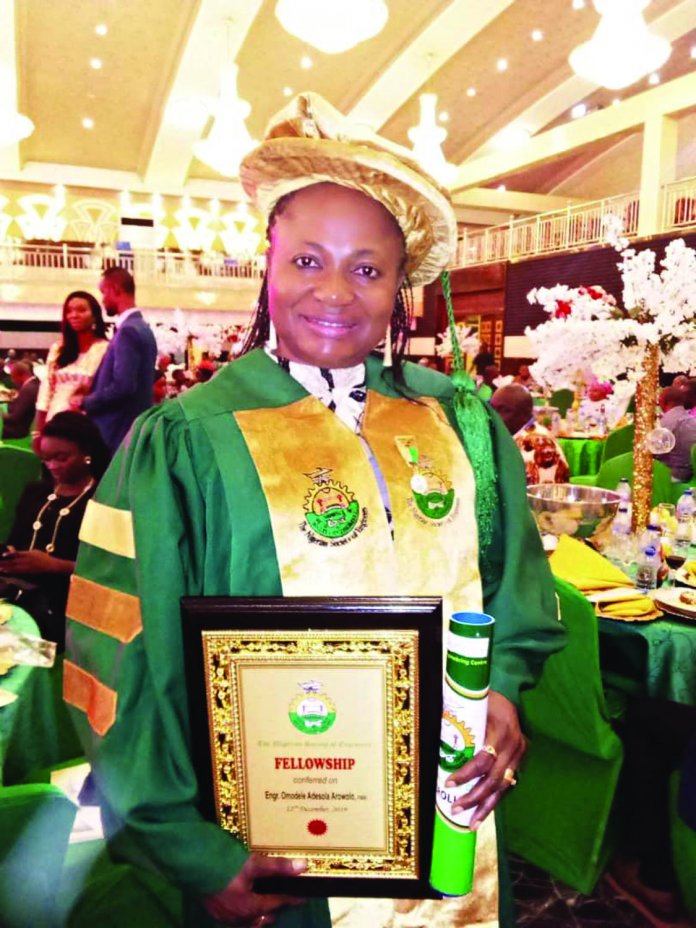 The Nigerian Society of Engineers, an umbrella organisation for the Engineering Profession in Nigeria, has conferred the Fellowship of the Institute on Engineer Omodele Adesola Arowolo, in confirmation of her standing as one of the foremost distinguished engineers in Nigeria. The prestigious elevation of Arowolo, through the Fellowship conferred on her on December 12, 2019, was in recognition of a life of service to best practices in engineering and management.

In contemporary times where there is a clamour for emancipation and equality of representation of women in social, political and economic spheres, Engr. Mrs. Arowolo has chosen to be a leader in her career. This, she has lived up to, and is bound to further the objectives, interests and influence of the NSE. Her career trajectory speaks of competence, commitment and continuity; an embodiment which drives successful outcome in any chosen profession.

A thoroughbred professional, she has distinguished herself in her chosen career. In all reserve, distinction has been her first choice from the start. This has defined her pedigree as a noble engineer, in addition to her zeal of making meaningful contribution to the development of Nigeria, as her focus. While doing this, she wishes above all that her contribution and roles should be recognised and appreciated.

Engr. Mrs. Arowolo was born on the 17th of August 1965, and studied Electrical/Electronics Engineering at the University of Lagos. Since that foundation in 1988, she has spent time contributing and growing her expertise in aviation and aerospace engineering. Her career has gone through many aspects of aeronautics, aviation safety, regulation, communication, networking and surveillance.

She hails from Kwara State and holds a double Master’s degree in Electrical Engineering (M.Eng.) and Business Administration (MBA) in 1992 and 2005, repectively. Earlier, she obtained a B. Sc. (Hons) in Electronics in 1989 and a Post Graduate Diploma (PGDEE-Elect/Elect) with distinction. Getting distinctions, it must be said, has become a habit for this distinguished engineer; apart from the PGDEE – distinction she also had distinction in her Master’s degree in Electrical Engineering from Bayero University, Kano. She would soon crown these efforts with a Doctorate in Radio Space Propagation at the University of Lagos where the journey started.

The pursuit of excellence has been the guide for Mrs. Arowolo’s post-graduation engagements, from professional service to further studies. She decided to distinguish herself as a manager when she enrolled a few years into her career for the Masters in Business Administration at the University of Ilorin. She then excelled in several other pursuits.

Arowolo eventually chose to pursue a career in aviation. She got a Diploma in Aviation Security/Aerodrome Operations with Distinctions in 1996. Another Distinction followed in 2005 in Air Traffic Safety Electronics Personnel License ATSPEP License. Presently, Engr. Arowolo works with the Nigerian Civil Aviation Authority, the apex regulatory Authority in Nigeria. She started her aviation career during her National Youth Service corps as a trainee Engineer from April 1989 to March 1990 and was elevated to the position of a Maintenance Engineer which she left in 1992 to join the Federal Civil Aviation Authority (FCAA).

She was an operation/Aviation Security Officer from March 1994 to April 1996.In 1995, Federal Government reorganization led to the creation of the Directorate of Safety Regulation and Monitoring (DSRAM). FCAA became defunct and Engr. Arowolo joined DSRAM and continued from where she as an Operations/Aviation Security Officer. At another metamorphosis, DSRAM was collapsed again to give birth to the Nigerian Civil Aviation Authority (NCAA) in 1992. Mrs. Arowolo joined NCAA at the commencement of operations in 2000 as Acting Regional Manager.

By December 2002, she was deployed as an Assistant Chief Communication Navigation and Surveillance. But by 2004 she was back as the substantive Regional Manager in Kano. After excelling as a Regional manager, the Authority wanted more professional responsibilities for her. Wherefore in 2006, she was recalled and made Air Navigation Safety Inspector, from where she rose to the post of a Deputy General Manager (Aero-telecommunications) a position she is holding currently.

She is an engaged professional who also finds time to network with colleagues in professional groups and to contribute to their development. She has served in several aviation committees. They include serving as National Coordinator, Aviation System Block Upgrade Methodology Implementation Committee, on the National Performance-Based Navigation Committee and the Technical Advisory Committee to the National Frequency Management Council to World Radio Communication Conference 2015. She was also a member of the Nigerian Civil Aviation Regulations Committee and served in the Development of Aeronautical Telecommunications Manuals of Standards.

She is a member of several professional bodies. Member, Nigerian Society of Engineers, Associate Member, Nigerian Institute of Management, Member, Institute of Electrical Electronics Engineer (IEEE) America, Member, Council for the Regulation of Engineering in Nigeria. Engr. Arowolo has as hobbies; reading, playing lawn tennis, cooking, watching movies and sewing. She is married with children.