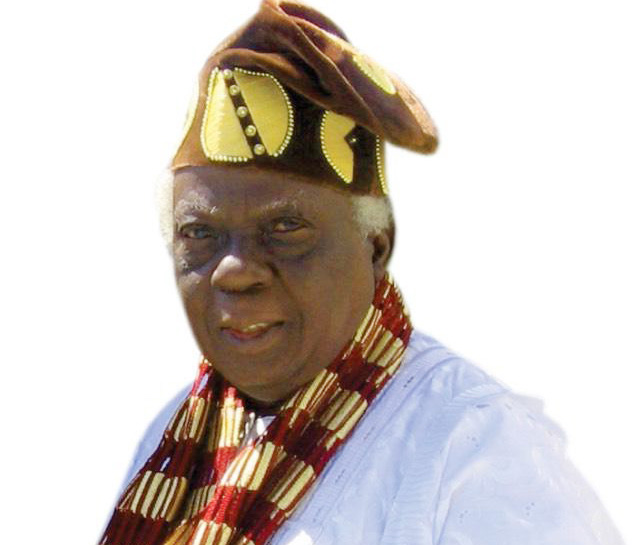 Long before I met Chief Olayinka Simoyan, the Bashorun of Egbe who died on October 20, 2019 in person, I had known him by reputation. Hardly could there be a person of Okun Yoruba origin of my age and exposure in Nigeria in the 1980s and 1990s who would not have heard of him.

After what was obviously a sterling career in the diplomatic service during which he served in Vienna, Paris, Washington DC and Cotonou, he had retired to take up a seat on the board of IBWA/Afribank as an Executive Director. It was in that position that he was able to open the gates of the bank to young people, many of the Okun Yoruba, to fulfill their dream careers in banking. There was hardly any branch of the bank across Nigeria that did not have an Okun person on its staff. Not only did he help them gain employment, he also, like a mother hen, watched over their career growth. In no time, Chief Simoyan’s reputation among his compatriots grew higher by the day.

So, by the time I would meet him for the first time in 1990, I already knew much about him. I was travelling to Kogi State from Lagos in the company of a friend, for the Easter when he suddenly stopped along the way to greet an elderly man. He subsequently introduced the man to me as Chief Olayinka Simoyan. I was quite excited to meet, in the least expected place, a man of whom I had heard so much. If I had any surprise at all, it was that the man’s physical stature did not match his robust reputation. I had expected that he would be a giant of sorts.

I was not to see Chief Simoyan again until about six years later, by which time I had become the News Editor of the Daily Times. One afternoon in the heat of our production, a former school mate of mine at the University of Ibadan, had breezed in with an invitation for me to meet Chief Simoyan who he described in superlative terms. He said the Bashorun of Egbe desired to throw his hat into the ring at then impending governorship election in Kogi State. My mate was therefore trying to build a coalition of Okun professionals to support the bid. On the appointed day, we met Chief Simoyan at his residence, then in Idiaraba, Lagos.

The chief was at his affable best as he received us but profusely lamented the rot in Kogi State and about how the wrong people, being at the helm of affairs, had made it impossible for the young state to properly take off in a way that would guarantee a good future for the people. He said that with his exposure and experience, he was the right person to steer the state in the right direction. We discussed strategies by which to articulate his plans and present them to the people of the state. Indeed, we made a few outings in the press about which Chief Simoyan was very glad.

However, not long after that, information filtered to me that he was having a rethink about his governorship ambition. Nothing happened again in that direction and we did not meet again until seven years later, by which time I had become the Editor of the Sunday Times.

We had concluded our weekly editorial conference one day and I was getting set to close when my secretary came in and informed me that a guest was waiting to see me. The guest turned out to be Chief Simoyan who, as usual was garbed in an exquisite babanriga.

As he settled down, I guided the conversation towards his aborted governorship bid but he did not seem too enthusiastic about discussing it. At my further probing, he expressed his frustration at the attitude of those in politics who he said saw his declaration of intention as an opportunity to milk him dry. He decried the double-faced nature of many of the folks who claimed to be assisting him. He said he therefore terminated the bid so as not to put himself in further physical and emotional stress.

That, however, he said, was not why he had come to see me. He said he had seen many editions of the Sunday Times which we were working had to regenerate and that he was proud to see my imprint on it. He therefore offered to take up a column in the paper, an offer I was delighted to accept. Then Chief Simoyan surprised me. He reached inside his pouch and brought out the material for his first column.

That was the beginning of our relationship at another level which eventually became like that of father and son.

Chief Simoyan was an editor’s delight. As a columnist, he was meticulous, disciplined, deep, and sensitive to the direction of developments in the public space. Many of our readers were quite enthralled by the depth and variety of his thoughts as espoused in the subjects he handled. The deadline for the submission of his material was usually Thursdays, but it was always in by Tuesdays. And his copy came in perfect shape requiring little or no editorial interventions. Mostly, he brought his copy himself. Those visits to deliver his copy also served as an opportunity for our meetings, at which he would usually sound me out on current issues. He liked to discuss Okunland and the ways to bring development there. He was passionate about Okunland, but particularly about Egbe, his hometown. He loved Egbe with an unusual passion. He made many trips home during the period, usually with his late wife, who he addressed as Ayinba. He taught me that the wives of Yoruba traditional rulers were addressed as Ayaba, those of Bashoruns as Ayinba and those of other chiefs as Olori.

I began to look forward to those Tuesday meetings. If Chief Simoyan was going to be out of town, he was careful to submit ahead, materials for his column for the entire period he would be away.

Sometimes, it was for three weeks and on such occasions, he reached into his rich diplomatic experience to write on evergreen subjects.

One day, he came into my office mid morning and as I was about to wonder why he came so early and on a different day, he told me of his anger with one of the soft sell magazines then which published an article full of derogatory remarks about his home town,  Egbe and its people. Somebody had drawn Chief Simoyan’s attention to it and in no time, he had assembled eight top indigenes of Egbe, among them military generals. He told me that when they got to the office of the organization, they expressed their disgust at the errant publication and its editors, who he said promptly undertook to apologize to the people of Egbe in their next edition. That was one of the very few occasions I ever saw him lose his cool.

Chief Simoyan loved Egbe like a mother loves an only child. When he noticed that poor performance at the school leaving examination was robbing young indigenes of the town of admissions into tertiary institutions, he promptly established a remedial school for them. His passion for education had its roots in how he eventually was able to cut off the hamstrings of illiteracy and poverty. He started school late at about age 14 and his mates were far ahead of him. He braved the odds and in four years, he had completed primary school as against the regular seven years then. Throughout his life, he was grateful to his missionary “parents”, an American couple, the Wagoners, who had taken him in as a mission boy.

When in 1972, the Federal Government was going to commence the reconstruction of the Ilorin-Kabba-Lokoja road which passes through his hometown, he used his connection with the French to get the construction company, Dumez to set up its camp at Egbe. That singular act, he later told me, helped tremendously to grow the economy of the town.

I visited him in Egbe once and I noticed a massive construction project going on at his country home. I asked him why he was doing that in what obviously was the “evening” of his life. He patiently explained that he needed more space, particularly for his books, and he had quite a huge library, and that every little construction was helping to develop the town.

Chief Simoyan was an exemplary family man. His love for his wife was legendary and it was quite interesting to watch them trade banters in their home like young lovers.

He was also very proud of his children and their achievements. He was happy that each of them had found his/her feet and had become independent. His wife’s death hit him hard. When Mama’s ailment started, I had visited one afternoon and he told me that “your mother is ill.” We prayed together and he told me on phone the following day that that prayer was like a soothing balm and that Mama had great relief afterwards. We were never to know that the ailment was as life threatening as it turned out to be.

After the funeral of his wife, he had told me, with great pain that seeking a cure for the ailment was like fighting the devil; just when you thought you had won, the devil emerges with greater rage to launch a fresh challenge.

Chief Simoyan and the children gave his wife a funeral worthy of the Ayinba that she was. In the evening after the funeral, he took me to the frontage of his house where he had prepared her grave. I noticed that there was an additional space near Mama and had, quite undiplomatically, asked what it was meant for. He let out a childlike chuckle and turned inside the house. He did not give me answer.

When, after the church service on Friday, January 24, 2020 we let down the earthly remains of Chief Olayinka Olasehinde Simoyan, the Bashorun of Egbe and the Gbokunniyi of Okunland into the grave, near his beloved wife, a great chapter would have closed and then I would have an answer to my question on what the extra space at the burial site was meant for.

––Ipinmisho was editor of the Sunday Times