The National leadership of the Peoples Democratic Party (PDP)  Thursday demanded a review and reversal of  the Supreme Court verdict on the Imo state governorship election that nullified the election of Emeka Ihedioha and ordered the swearing in of Senator Hope Uzodinma as the governor.

The party at a world press conference addressed by the National Chairman of PDP,  Prince Uche Secondus, with all members of the National Working Committee (NWC)  surrounding him. also called for the resignation of the Chief Justice of Nigeria, Justice Mohammed Tanko,  while also asking him to recuse himself from all PDP related cases.

According to the national chairman of PDP who said that the party was grieved by the  Supreme Court verdict on the Imo state governorship election, also described it as a recipe for crisis and a gradual death knell for democracy in the country.

Secondus said,  “In the light of extraordinary circumstances that vitiates that judgment as a product manipulation and a clear coup d’etat against the will of the people of Imo State, we demand that the decision of the Supreme Court on the Imo Governorship Election be reviewed and reversed in the interest of justice.

“Furthermore we demand that Justice Tanko Mohammed, the CJN and his colleagues on the Imo Governorship Panel recuse themselves from the remaining cases involving PDP in the Supreme Court.”

According to the PDP National Chairman, “We state for the records that the Supreme Court under Justice Tanko Mohammed shall be held responsible if there is any breakdown of law and order in any state as a result of judgments procured solely for political rather than judicial reasons as is currently happening”.

He alleged that  the Supreme Court, as presently constituted under Justice Mohammed Tanko, had become heavily compromised, lost its credibility and had now been annexed to execute ignoble agenda of the APC-led Federal Government against the Nigerian people.

Secondus further said that  the judgment of the Supreme Court voiding the lawful election of Hon. Emeka Ihedioha (who scored 276,404 votes) and awarding “fictitious” votes to declare Hope Uzodimma of the APC, who scored 96, 458 votes as governor of Imo state, was highly irrational, unfounded, a provocative product of executive manipulation and a recipe for crisis, which should not be allowed to stand.

He said that with the verdict, the Supreme Court executed a coup against the PDP and the people of Imo state as well as other Nigerians, and such must not be allowed to have a place in Nigeria’s democracy.

The PDP national chairman posed the following  questions  to the Justice Tanko’s Supreme Court and members of the panel of justices to answer:

They are.  “The Supreme Court, in a host of cases, the latest and most celebrated being Atiku V Buhari & Ors, consistently decided that for a petitioner to succeed in an allegation of infraction of any provision of the Electoral Act especially one complaining about malpractice, as in this case, wrongful exclusion of votes, the petitioner must call witnesses polling unit by polling unit.

“The question is, how many witnesses did Uzodinma/APC call from the 388 polling units from where the Supreme Court allocated votes to him.

“The so called results from the 388 Polling units were rightfully rejected, in line with several decisions of the Supreme Court, by the Tribunal and Court of Appeal as it was merely dumped on the tribunal in a Ghana Must Go bag, by a policeman who had no mandate of the police to testify at the Tribunal”.

He said that the  Tribunal did not even open the Ghana Must Go bags as there was no basis to do so, stating,  “It is one of the great wonders of the world how the Supreme Court opened the bag, counted the results and added them to only the APC Candidate”.

According to Secondus,  “What is more perplexing is the fact that INEC produced a schedule of reasons why results were not produced from the 388 units.

“Indeed election did not even take place in most of the units for one reason or another, like violence, etc and so no result could possibly be obtained from those units. The results were not merely rejected or cancelled by INEC.

“None of the candidates or their Counsel, except perhaps APC, as we speak, are aware of the number of votes scored by each party from the 388 polling units. The Tribunal or Court of Appeal did not mention or ascribe any figure from the units to any party in their decisions”.

Secondus explained,  further,  “In fact, in the cross examination of the APC Candidate, Sen. Hope Uzodinma, he could not read any figure from the “Oluwole” results. He said that the figures were not clear. And so it beats our imagination where the Supreme Court conjured and manufactured the figures it used in declaring Uzodinma/APC as duly elected”.

He said that the law is settled as decided by the same Supreme Court in Buhari v. INEC (2008); that “weight can hardly be attached to a document tendered in evidence by a witness who cannot or is not in a position to answer questions on the document.

He said that  one of such persons the law identifies is the one who did not make the document. Such a person, he said,   is adjudged in the eyes of the law as ignorant of the content of the document.

Then Secondus further raised the following questions, “Does the Supreme Court have powers to formulate and allocate votes as election results?

“Were the said results certified by INEC as required by law?  Did Hope Uzodinma call 388 witnesses from the 388 polling units to speak to the results to obviate the principle of dumping which the Supreme Court used against the PDP and her candidate, Atiku Abubakar, in the last Presidential Appeal.

“Were the presiding officers and or party agents of the 388 polling units called to testify by Uzodinma/APC, who were the Petitioners?

“What are the figures from each of the various 388 polling units generated and allocated to Hope Uzodinma/APC by the Supreme Court?

“Is the Supreme Court saying that all the votes from the alleged 388 polling units were for the APC alone in an election that was contested by over 70 candidates?

“It is on record that the votes analysis from the Imo governorship election as at March 11, 2019 when the results were declared were as follows:  -Total Accredited Votes: 823,743

He also asked the following questions: “Can the Supreme Court sit in Abuja on January 14, 2020 to increase the total number of accredited votes in election held in Imo State on March 9, 2019.

“Is there any law, which permits the Supreme Court or anyone else for that matter, to unilaterally increase the total accredited votes by any margin after the accreditation and or the election?

“Where did the Supreme Court get the numbers to declare Uzodinma/APC from a paltry 96,456 votes over Ihedioha/PDP votes of 276,404?..”

He explained that the victory of Ihedioha/PDP were confirmed by 2 concurrent judgments of both the Tribunal and the Court of Appeal and the tradition is that the Supreme Court hardly tamper with such decisions except it was found to be perverse, adding “What was the evidence of perversity?”

According to Secondus,  “It is important to also bring to the consciousness of well-meaning members of the public, particularly Nigerians, that there were two elections on March 9, 2019, namely, Governorship and the House of Assembly.

“As already known, there was only one accreditation for the 2 elections. The APC did not win any of the 27 seats in the Imo State House of Assembly which were won as follows:

“The above further questions and confronts the rationale for the judgment of the Supreme Court on Imo State.

“How then did the Supreme Court arrive at its decision to allocate results to void a lawful governorship election and imposed an unelected person as governor?”

Accordingly, Secondus said that the fact is that, the Supreme Court, as presently constituted under Justice Tanko, has lost its credibility and no longer commands the respect and confidence of Nigerians.

In view of this, the national chairman of PDP said,  “If the people no longer repose confidence in the Supreme Court, then our democracy, national cohesion and stability are at great risk.

The constitution of the panel that heard the appeal itself was a product of drama”.

Secondus said that the panel was changed three times and any judge that showed signs of not agreeing to murder democracy in this case was promptly removed by the CJN, adding that the result has to be unanimous to satisfy the script of rationality.

He further asked,  “But can any judge who sat on that panel go home and sleep well?

“Can any judge who sat on that panel face his creator and swear that impartial justice was done? We think not”.

The national chairman said that PDP  had intelligence before the verdict on the Imo Governorship that the hierarchy of APC had decided that they must use the Supreme Court to capture the states won and controlled by the PDP such as Imo, Sokoto, Bauchi, Adamawa and Benue.

He again asked,  “Can the PDP rightly trust the impartiality and independence of the panel headed by Justice Tanko Mohammed, the CJN, to adjudicate on the remaining cases involving the PDP like Kano, Sokoto, Benue, Bauchi, Adamawa, Plateau and others?

“Is the same fate awaiting the Governors of these states that are controlled by the PDP and other states like Kano where the PDP clearly won and was robbed?

“Should Justice Tanko Mohammed and his colleagues on the Imo Governorship Panel not recuse themselves from the remaining cases involving PDP?”

He said that the PDP firmly holds that if the flawed judgment of the Supreme Court on Imo governorship election was allowed to stand, it would be a recipe for anarchy, chaos and constitutional crisis not only in Imo state but in the entire country.

Again,  he said,  “Our party has it on good authority that Justice Tanko and his panel are working on instruction from certain forces in the Presidency to use the Supreme Court to take over states lawfully won by the PDP and award them to the APC”.

Accordingly, Secondus said,  “The PDP therefore advises Justice Tanko not to allow himself to be used to push our nation to the path of anarchy and constitutional crisis as any further attempt to subvert justice in the pending petitions on Sokoto, Bauchi, Benue, Adamawa as well as Kano and Plateau states will be firmly and vehemently resisted.

“In other to avoid an imminent breakdown of law and order, the PDP demands that Justice Tanko Mohammed immediately steps down as CJN and chairman of the National Judicial Council as Nigerians have lost confidence in him and a Supreme Court under his leadership.

“Justice Tanko must not head the panel to determine the remaining election petitions before the Supreme Court”. 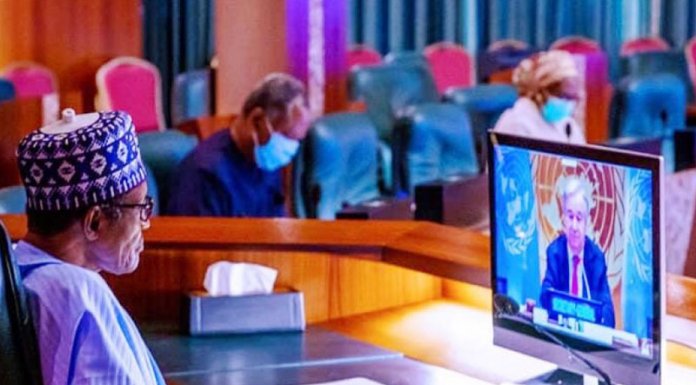