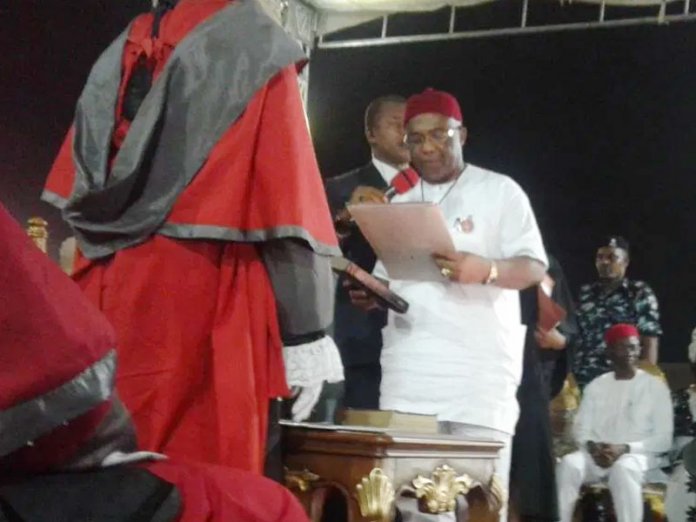 Sen. Hope Uzodinma of the All Progressives Congress (APC) has been sworn in as the substantive governor of Imo after the Supreme Court declared him winner of the March 9, 2019 governorship election.

Uzodinma was sworn in on by the Imo Chief Judge, Justice Pascal Nnadi, with his team of over 30 judges from the state judiciary at exactly 7.25 pm after his Deputy, Prof. Placid Njoku who took his oath of office by 7:15 p.m.

The News Agency of Nigeria (NAN) reports that the swearing-in ceremony took place at the Hero’s Square in Owerri on Wednesday.

Nnadi while performing the swearing in said: “In line with section 185 (2) and Section 187 (2) of the Constitution of the Federal Republic of Nigeria, and with the powers vested on me by the constitution, I hereby swear in Sen. Hope Uzodinma as the sixth democratically elected governor of Imo state.”

Uzodinma, in his inaugural speech, described his victory as `rare’ and a reminder that God is faithful and does not abandon those who trusted in him.

He thanked the apex court for restoring the people’s confidence in the judiciary and the National Chairman of the party, Comrade Adams Oshiomole, as well as the party’s central working committee for their efforts in ensuring that justice prevailed.

“It is a historic judgement which has assured Nigerians and Imo in general that the judiciary remains the hope of the common man. This victory is for all Imo people, it is victory against impunity, victory for justice,” he said.

Uzodinma said he had forgiven all his political enemies and would carry everyone along adding that his government would revolve around reconstruction, rehabilitation and recovery to ensure good governance.

“I will respect the principle of separation of powers and allow the other arms of government to operate independently for a better Imo. God bless Imo state,” he said.

NAN reports that the inauguration was attended by former Gov. Rochas Okorocha of the state and Senator representing Imo West Senatorial District, and Sen. Ifeanyi Ararume.

Others are the National Chairman of the All Progressives Congress (APC), Comrade Adams Oshiomhole and serving members of the Federal House of Representatives from Imo, Mr Chike Okafor and Mr Kingsley Uju.

Also in attendance were the Ministers of State for Education, Mr Emeka Nwajiuba, and his counterpart in Solid Minerals, Dr Uche Ogah.

Others were traditional rulers, members of the state House of Assembly led by the Speaker, Mr Chiji Collins, representatives of Civil Society Organizations, heads of security agencies, religious leaders and sundry.

NAN reports that Gov Uzodinma had earlier received a Certificate of Return from the Independent National Electoral Commission (INEC) in Abuja barely 24 hours the apex court nullified the election of Mr Emeka Ihedioha as the governor of Imo. (NAN)