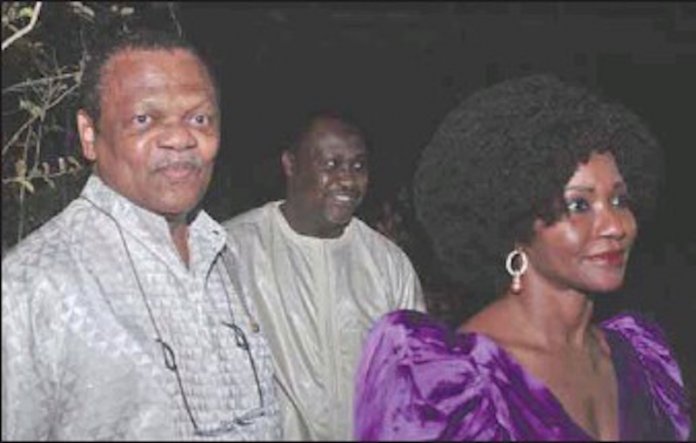 Married couples are told to share everything. In fact, one of the joys of being married is that there is always someone with whom one can slice the cake with, and eat half slices with twice the enjoyment. So when a wife shares a hobby with her husband, that’s an extra knot in the matrimonial tie.

The Peterside couple is remarkable for their aristocratic distinctiveness, something that inadvertently spilled over onto everything else, including their sartorial ensemble, the company they keep, the equal-parts admiration and envy they garner from colleagues and society, the kinds of weddings they underwrite, where such weddings occur, even the types of pastime they indulge, and much more.

Atedo Peterside is the husband of the Peterside family. He leads the patrician household as well as wears the pants in the family. As the founder and pioneer managing director chief executive officer of Stanbic IBTC Plc, one might immediately assume that the system of government in the Peterside family unit is monarchic, but it clearly isn’t.

To quote Maltese-born British writer and novelist, Gerald Brenan, “in a happy marriage, it is the wife who provides the Dudun Peterside lends a maternal and queenly luminosity to the clan. She also talks a good game in corporate society, being a psychologist and an executive coach who also styles as a human development adviser and consultant trainer.

A truly notable pairing is the Peterside power couple – one to keep the money of society and the other to tend the minds of its people.
As earlier remarked on, their interests and pastime identify them as relaxed and laid-back. This is corroborated by the general knowledge that Atedo and Dudun are ardent sports aficionados – but not the conventional form: polo, the game where horses get to have fun along with their riders in a congenially competitive atmosphere.

Reportedly, their mutual passion for polo came from Dudun herself, who introduced Oga Atedo during their courtship. Sharp man that he is, he embraced it at once, but has since come to love it in truth. This is evident from the fact that he almost never misses out on the annual tournaments. More astonishingly, Dudun is reportedly a top member of the Lagos Polo Club – the only female member for a number of years!
For the Peterside couple, bonds cover more than blood and tears and sweat, but also polo.