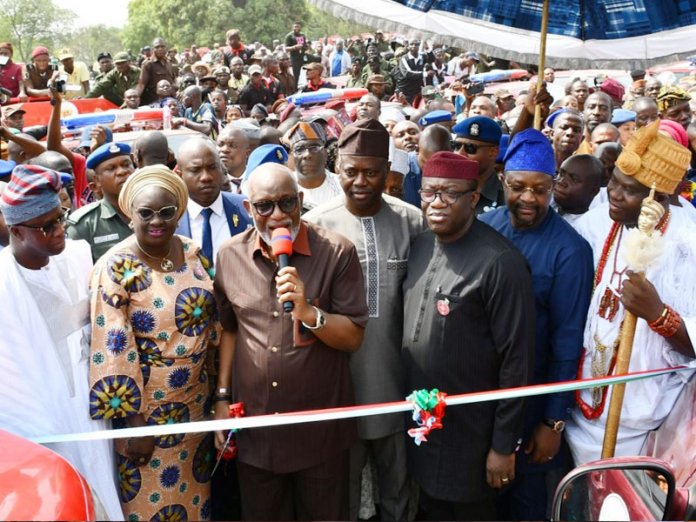 There were concerns yesterday over the absence of the military and the police during the launch of Operation Amotekun, a regional security outfit promoted by the six states in the South-west, whose operational vehicles were unveiled in Ibadan, Oyo State.

Despite the absence of security chiefs at the event, the Governor of Ondo State, Chief Rotimi Akeredolu (SAN), his counterparts in Ekiti State, Dr. Kayode Fayemi, and Oyo State, Mr. Seyi Makinde, as well as Ooni of Ife, Oba Adeyeye Ogunwusi, lauded the scheme, saying it will address the challenges of insecurity in the region.

Fayemi used the occasion to disabuse people’s minds that Operation Amotekun was a ploy by the South-west governors to create state police.
He also said they were not out to undermine the integrity and sovereignty of Nigeria but were providing the Yoruba people with a “confidence-building strategy” to tackle crime and criminality in the region.

Operation Amotekun was inaugurated to tackle robbery, kidnappings and banditry in the region, with its headquarters in Ibadan.
Members of the O’odua Peoples Congress (OPC), local vigilantes and hunters are expected to join the operation and work with security operatives, including the police, military and paramilitary.

THISDAY gathered yesterday from the Nigerian Army, Nigerian Navy, Nigerian Air Force and the police that they were not consulted or briefed on the role they would play in the security initiative for the region.

Speaking on account on anonymity, a senior official in the Navy said: “Although the programme was touted to be a joint operation that is supposed to involve the military, none of us were consulted or briefed.

“I think they are just doing their thing on the political level. But if we are to come into the arrangement, the Chief of Defence Staff (CDS) will have to give us an official directive.

“At least none of us in the South-west region have been contacted. Nonetheless, it is not a replication of other operations we are running in the region.”

Another source in the army debunked claims that the operation was a spin-off of Operation Crocodile Smile going on in the region.
He said: “There is no comparison between Operations Crocodile Smile and Amotekun. Ours is a purely army affair. All the same, we haven’t been contacted.

“I also read in the papers where they said they will work with us. We are not adverse to that, however, they will have to go through the Chief of Defence Staff.”

THISDAY also gathered from the police in the region that they did not get any directive from the Inspector General of Police (IG), Mr. Mohammed Adamu, to get involved in the security outfit, despite his professing support for Operation Amotekun.
A senior police officer who craved not to be named because he was not authorised to speak on the matter, told THISDAY that they were yet to be briefed on the operations.

He said: “For now, we might not have an idea of what they want us to do. We await directives from the Force Headquarters on the next step to take because this is bigger than us at this level.”

However, Makinde’s Special Adviser on Security, Mr. Fatai Owoseni, a retired Commissioner of Police, said those to be recruited into the security outfit would be trained by the conventional police force, stating that they would more or less serve as neighbourhood watch in the six states of the region.

When contacted by THISDAY to clarify the role of OPC in the security outfit, Aare Ona Kakanfo of Yoruba and leader of the group, Chief Gani Adams, who was represented at the launch, declined to make further comment on the security scheme.

According to his Personal Assistant, Mr. Kehinde Aderemi, Adams would no longer comment on the issue.

Despite the absence of security chiefs at the event, Akeredolu, Fayemi and Ooni lauded the scheme, saying it would address the challenges of insecurity in the region.

Akeredolu, who is also the Chairman of South-west Governors’ Forum, said it had become continuously embarrassing that South-west suffered from security challenges.

The governor, in his keynote address, said Operation Amotekun would not participate in any political activities.

“It has become embarrassing that insecurities are happening in the South-west. Amotekun will save us from ritual killing, cybercrime, kidnapping, among others. We shall not relent until the entire place is secured.

“We, the South-west governors, believe in the unity of Nigeria and we can’t afford to break this country. I married an Igbo woman and we believe in Nigeria. We are committed in the idea to make Nigeria great and united,” he explained.

The Ooni called on personnel of the security outfit not to betray the region on the ideals behind setting it up.

He said the governors in the region had done their best, adding that it was left for the personnel and the residents of the region to work together for the success of the security outfit.

“All the traditional rulers are in support; the federal government is not opposed to it; let all and sundry support it for peace to reign in the region. The success of this security outfit will be to the benefit of the present generation and generations yet unborn,” he said.

Fayemi allayed fears of those who believed that Operation Amotekun was a regional police through the backdoor.
Fayemi stated that the South-west governors were not out to undermine the integrity and sovereignty of Nigeria but were providing the Yoruba people with a “confidence-building strategy” to tackle crime and criminality in the region.

The governor added that Amotekun was neither an alternative to any of the conventional security agencies in the country nor a state police.
He said rather, it would complement and work in collaboration with security agencies to provide adequate security of lives and property in the region.

“The Western Nigeria Security Network, Operation Amotekun, is nothing but a community policing response to a problem that our people would like to put an end to. But pending the time that the community policing strategy being put together by the Nigeria Police comes to fruition, it is clearly important that we give our people a confidence boosting strategy.

“So if you ask me, Amotekun is nothing but a confidence-building strategy for our people in the western zone. When those elements that are going to work in the joint task force with the mainstream security agencies undertake this assignment, they are going to do it with the knowledge of the terrain, language and culture of the community they are going to work.

“Amotekun is not duplication, neither is it a replacement for the Nigeria Police Force. Amotekun is a complement that gives our people the confidence that they are being looked after by the people they elected into office. We do not want this to create fear in the mind of any one. We are not creating a regional police force. We are not oblivious of the steps we need to follow in forming a state police. We are law-abiding citizens of Nigeria. We know that will require a constitutional amendment and we are not there yet,” he said.

The governor said Amotekun would reduce the burden on the federal security agencies, which he described as “overstretched.”

Although the absence of Governors Gboyega Oyetola of Osun State, Dapo Abiodun of Ogun State and Babajide Sanwo-Olu of Lagos State fuelled initial apprehension over the security scheme, their aides explained why they could not personally attend the event.
While Oyetola and Abiodun were represented by their deputies, Sanwo-Olu was not represented.

Akeredolu, however, said the Lagos State governor could not attend the event because of flight challenges.
He said Oyetola was one of the committed governors behind the regional security agency.
“Governor Gboyega Oyetola has no any reason not to be involved because he was part of the activities from the beginning to the end but if not because of the other pressing state matter, he would have been there fully,” he added.

“We did what was due and we are fully in support of the programme. We provided 20 patrol vehicles and gave other logistic supports as required,” he said.

He dismissed insinuations that the governor chickened out of the security arrangement as agreed upon by the South-west governors.

Also the Chief Press Secretary to Osun State governor, Mr. Ismail Omipidan, said since the deputy governor was at the venue in Ibadan with other south-west governors, Oyetola was equally present.