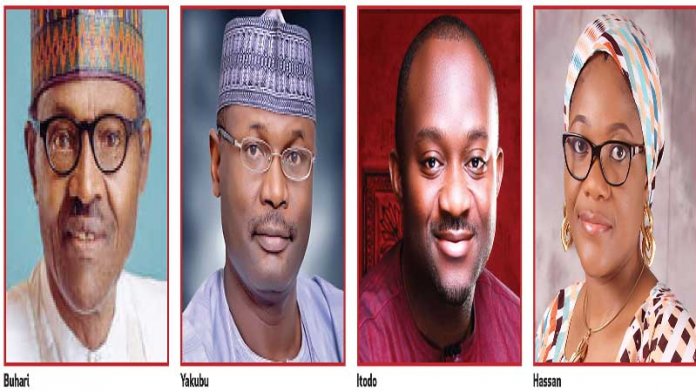 Udora Orizu writes that ahead of the 2020 gubernatorial elections scheduled to hold in Edo and Ondo states, election monitoring groups, which include; Centre for Democracy Development (CDD), YIAGA Africa and Global Rights, have charged President Muhammadu Buhari and the Independent National Electoral Commission on how to conduct credible polls devoid of violence

In Ondo State, which goes by the sobriquet, Sunshine State and Edo State, known by many as the Heartbeat of the Nation, governorship elections will hold this year as scheduled by the electoral umpire. Looking at the volatility of both states, all eyes are on the electoral body, the Independent National Electoral Commission (INEC) which has a Professor of History, Prof. Mahmoud Yakubu and, of course, President Muhammadu Buhari.

No fewer than 15 election monitoring groups are expressing concerns and have, however, cautioned stakeholders involved in the elections with a view to averting what was witnessed in Kogi, the Confluence State and Bayelsa State during last gubernatorial polls. Top among their expectations is the signing of Electoral Amendment Bill by the President which is still pending.

Similarly, a letter, titled, ‘A Call for Urgent Legislative Action to Protect Electoral Integrity and Address Shrinking Civic Space,’ which should also address incessant attacks on journalists, has been forwarded to the National Assembly under the leadership of Senator Ahmad Lawan and Rt. Hon. Femi Gbajabiamila.

In view of the massive outrage after the 2019 polls which led to the burning of Peoples Democratic Party women’s leader in Kogi State, Salome Abuh, observers and monitoring groups, both home and abroad adjudged the polls as marred with irregularities.

In its own assessment, YIAGA Africa, public policy think-tank, said the result of the Bayelsa governorship election was manipulated at the collation process, adding that it was because INEC’s result does not fall within the estimates of its Parallel Vote Tabulation (PVT).

According to the group, the PVT is a proven and advanced observation methodology that employs well-established statistical principles and utilises sophisticated information technologies.

YIAGA adopted the PVT methodology for Election Day observation at the polling units – which provided timely and accurate information on the conduct of accreditation, voting and counting as well as independently verified the official governorship results as announced by the INEC.

However, in an exclusive chat with Our Correspondent, YIAGA maintained that it will strengthen its methodology and ensure that the National Assembly and the President do something on the Electoral Act sent to the lawmakers.

“We have plans to fix the Electoral Act as contained in the letter we recently sent to all NASS members, then all things being equal we will observe Edo and Ondo,” Executive Director of YIAGA Africa, Mr. Samson Itodo said in an exclusive chat with our correspondent.

The letter sent to National Assembly which was made available to THISDAY partly read, “As representatives of the people, we wish to express our deep concern with the following issues that could potentially imperil our two decades of democracy, if not addressed through legislative actions. They include:

While we appreciate the gains thus far in reforming the nation’s electoral process, citizen observation efforts during the recent elections in Kogi and Bayelsa states documented a decline in the quality and integrity of elections due to the high level of electoral manipulation, a deepening culture of impunity, and violence resulting in loss of innocent lives. Further legislative action is required to improve the nation’s electoral system and process to build citizens’ confidence and trust in the process. We fear that if urgent steps are not taken to fix identified areas in need of reform, we risk the prospect of reversing the gains of 20 years of democratic practice in the country.

The National Assembly is currently considering several pieces of legislation that threaten constitutionally guaranteed rights of the people, including freedom of expression, and peaceful assembly and association. This has created an atmosphere of fear and apprehension, thereby undermining the capacity of citizens to effectively engage in the democratic and governance process. Bills like the Protection from Internet Falsehood and Manipulation Bill (‘Social Media Bill’), Independent National Commission for the Prohibition of Hate Speeches Bill (‘Hate Speech Bill’), and NGO Regulation Bill, each containing provisions that undermine citizens’ constitutional rights, as noted earlier, and taints our democratic credentials.

The deluge of illegal arrests of journalists and civic activists, as well as the unlawful and coordinated attacks and assault against journalists and media organizations by state institutions undermines the media as vanguards of transparency and accountability.

As a legislator in the 9th Assembly, history beckons on you to salvage our democracy through bills, motions, and legislative advocacy to:

* Intensify pressure on the leadership of the National Assembly and your esteemed colleagues in the Assembly to accelerate the processes of further amendments to the electoral legal framework to protect the integrity of elections, strengthen electoral institutions, and safeguard citizens’ participation in the electoral process.

*Expand the civic and democratic space by upholding constitutional rights and halting further consideration of legislation like the NGO, Social Media, and Hate Speech Bills that restrict essential freedoms guaranteed to all Nigerians under the constitution.

As civil society groups committed to the Nigerian project, be assured of our solidarity and support as we work together to protect our democracy for our common good.

Having highlighted what it expected from other stakeholders, the CDD, through its Director, Idayat Hassan, insisted that despite all odds, election monitoring groups would not stop in deploying its members to witness Edo and Ondo polls.

Idayat said, “As events unfold in Edo state, CDD will continue to monitor developments on the role of money and personality in elections. Our rigorous analysis of elections mainly historical and electoral geography have all proved useful and served as confirmation as seen in Bayelsa and Anambra governorship elections.

“At the CDD, we are taking the use of disinformation in election seriously. To curb this, we will take media literacy into homes to improve citizens’ perception about fake news, misinformation and disinformation. Our #StopFakeNews Campaign will be landing in Edo state before the elections.

“For the Election Day, we will deploy accredited and well-trained citizens’ observers and journalists across the 18 LGAs in Edo state. CDD will monitor the processes and also focus on the collations of results so we can properly validate the electoral outcomes.”

In its part, the European Union, who said it had earlier told INEC, National Assembly and President Buhari what to do to have credible elections in Nigeria, reiterated that the executive should stop interfering in the affairs of the electoral umpire that has been described as an ‘independent body’.

While we appreciate the gains thus far in reforming the nation’s electoral process, citizen observation efforts during the recent elections in Kogi and Bayelsa states documented a decline in the quality and integrity of elections due to the high level of electoral manipulation, a deepening culture of impunity, and violence resulting in loss of innocent lives. Further legislative action is required to improve the nation’s electoral system and process to build citizens’ confidence and trust in the process. We fear that if urgent steps are not taken to fix identified areas in need of reform, we risk the prospect of reversing the gains of 20 years of democratic practice in the country