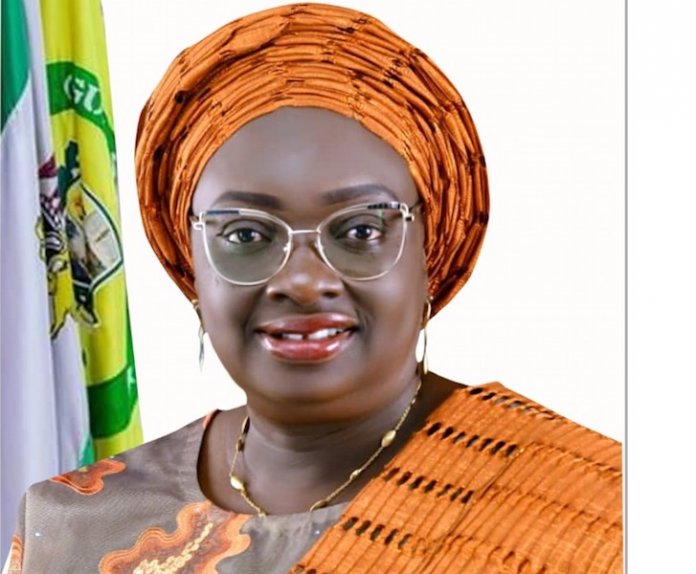 Oluwaseun Boye praises Mrs. Noimot Salako-Oyedele, an engineer and Deputy Governor of Ogun State for her outstanding role in different spheres which culminated in her current designation, as a role model to Nigerian women

The occasion of the 54th birthday of the Ogun State Deputy Governor, Engr. Noimot Salako-Oyedele today, presents an auspicious avenue to thank Allah for His faithfulness in the life of the Amazon.

An amazing woman, full of life, Salako-Oyedele, a prominent daughter of Aworiland, Ota, in Ado-Odo/Ota Local Government Area of the State, was born on 8th January, 1966 to the family of late Prof. Lateef and Mrs Rahmat Adebisi Salako.

She obtained a Bachelor of Science (B.Sc) degree in Civil Engineering from the University of Lagos in 1987 and an M.Sc in Public Health Engineering from Imperial College of Science and Technology, London, United Kingdom in 1989 and attended several courses as part of her continuous professional/career development.

In her quest for further knowledge, the Deputy Governor enrolled for a Master’s degree in Public Health Engineering from the Imperial College of Science & Technology London, UK. While at the United Kingdom, she served as a Graduate Engineer and Project Manager at Ove Arup & Partners between 1989 and 1995.

She served as Managing Director, NOS Nigeria Limited between 1995 and 2014, where she engaged in the construction of numerous projects ranging from office, commercial, industrial and residential buildings for the Federal Ministry of Health, Lagos State and Ogun State governments.

She is a multi-talented professional with over three decades of proven records of experience in Consulting, Contracting and Real Estate Sectors.

A highly cerebral goal- getter with wide range of experience in developing and implementing effective strategies in project management, Salako-0yedele was a former Managing Director/Chief Executive Officer between 2014 and 2015 at Glenwood Property Development Company Limited where she served as General Manager Business Development. She became the Acting Managing Director, Grenadines Homes Limited in 2015, a position she held till she ventured into partisan-politics and emerged as the Ogun State Deputy Governor.

Engr. Noimot Salako- Oyedele is happily married to Bode Oyedele, an APC chieftain and a retired Permanent Secretary in the Lagos State Civil Service. Their union is blessed with wonderful children.

Her Excellency is a devout Muslim, a socialite and an active member of Lions Club
In March 2019, she was elected by the good people of Ogun State to serve as Deputy Governor to His Excellency, Prince Dapo Abiodun. It is interesting to note that Salako-Oyedele, apart from being the only female Deputy-Governor in South-west of Nigeria currently, has contributed in no small measure to the vision and mission-statement of the Abiodun-led administration geared towards building the future of the Gateway State.

Upon assumption of office, she has embarked on a tour of public primary schools in the state where she expressed concern over their deplorable condition, especially their structural deficiency and the poor learning environment among others. Thus, these findings were immediately reported to the Governor, and as at today, well over 100 public primary schools have been rehabilitated to meet up with modern standards.

As an Engineer with proven track record, she is readily at the beck-and-call of her boss, Prince Dapo Abiodun, offering professional advice on engineering-related issues and one of such is the state of the bad roads which in the past, brought untold hardship on the residents of the State, especially during raining season. Salako-Oyedele has isnce identified some of the problems, the causes of flooding and reported same to the Governor, in areas that need quick intervention.

With the emergence of the Ogun State Public Works Agency (OGPWA), the people of the state are now re-assured of government’s determination and readiness to alleviate their plight through various interventions from the agency.

In the area of empowerment, the Deputy-Governor promises to always do the needful at ensuring that the womenfolk are not only empowered but also not left out of the scheme by ensuring that their personal prosperity is improved.

At the launch of one of the state government’s empowerment initiatives tagged “Oko’wo Dapo”, Salako-Oyedele said that the scheme was to fulfill electioneering promises made by Abiodun, while noting that majority of their followers are women.

“The scheme works within a cluster of 10 women, whereby the sum of N10,000 is presented to them and they make returns of N5,000 each after two weeks. This process revolves round 20 weeks after which the women would have saved the sum of N10,000, as well as, return their initial credit which will enable them upgrade and access a higher loan facility,” she averred.

Salako-Oyedele at different fora has tasked Nigerian women not to only take up roles in trade unionism but also participate in active politics, as a way of contributing their quota to nation building, she said women were great pillars in the society and should take up active roles in governance,
Addressing her professional colleagues lately, she charged the Association of Professional Women Engineers(APWEN) to be role models by encouraging younger girls to take up challenging careers like their male counterparts, describing engineering as a notable profession that is worthwhile, noting that no resource or sacrifice are too much to empower the girl child in nation building.

No doubt, she is a round peg in a round hole and a worthy partner in building the future of the Gateway State to an enviable position. The good people and government of Ogun state, especially, the Olota of Ota, Oba Abdulkabir Obalanlege and the Aworis are so blessed with an intelligent daughter of Aworiland to assist Governor Abiodun to paddle the canoe of the state to a safe berth.