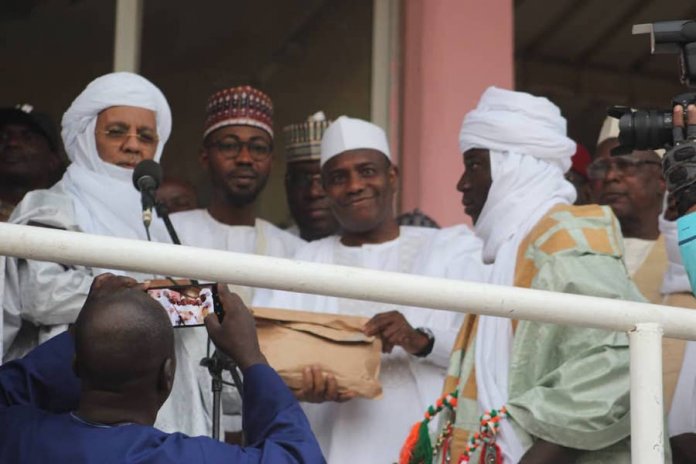 Gov. Aminu Tambuwal of Sokoto state has called on his colleagues in the northern part of Nigeria to give premium to organizing and hosting of cultural festivals to sustain the cultural heritage of the region.

The governor made the call in a statement issued by his Special Adviser Media and Publicity, Malam Muhammad Bello, in Sokoto.

Tambuwal spoke at the occasion of the 41st edition of the annual ‘Sabre National De Lutte Traditionnalle’ (traditional wrestling festival) held in Maradi state of Niger Republic, on Sunday.

The event was organized by the Nigerien ministry of Youths and Sports in collaboration with the organized private sector and philanthropists inside and outside the country.

He noted that many of such cultural displays abound in many parts of Northern Nigeria and should be institutionalised .

“We are yet to harness the full potentials that culture embed in the quest for national awakening.

“We can upgrade such cultural festivals like wrestling, which is in popular display in Northern Nigeria and standardise them in the manner Niger Republic has been able to do in the past four decades.

“Thus bringing all manner of spectators from far and wide to participate in the the Sabre fiesta,” he said.

The governor expressed hope that Sokoto state, which had been gracing the annual event for many years would continue to do so even after his tenure.

“As you all know my predecessors have been coming to this country to participate in this fiesta every year. I have also maintained that tradition and I hope it will continue,” he added.

Tambuwal further harped on the age-long relationship between the people of Niger Republic and those of Northern Nigeria.

“This annual festivity also underscores the historical unity of Nigeria and Niger Republic which has subsisted from the pre-colonial period till date,” the governor explained.

The overall winner of this year’s wrestling contest was Usman Hassan from Tillaberi state of the Republic. He floored his opponent, Tasi’u Sani from Zinder state.

Tambuwal and his entourage were hosted by his Maradi counterpart, Zakari Oumarou, the minister of Youths and Sports, Moctar Kasum as well as the Prime Minister of the Republic, Birgi Rafini. (NAN)