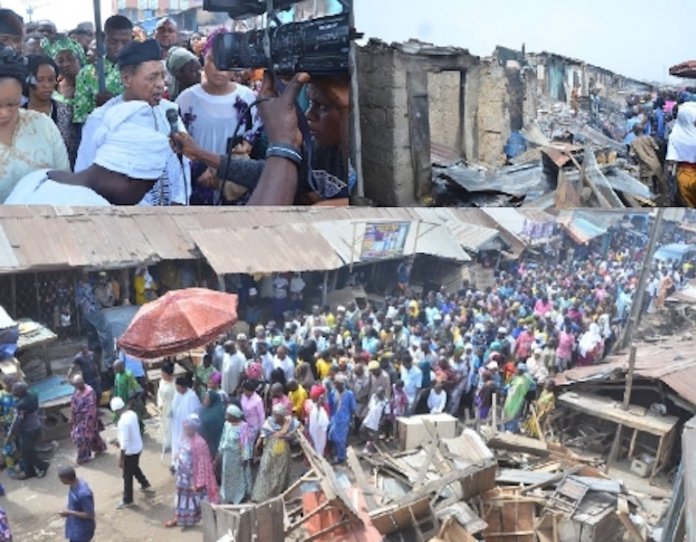 Three people were feared killed yesterday in the ancient town of Oyo following an early morning fire that razed larger part of the ancient Akesan Market as men of fire service, who were nearby, were unable to curtail the situation.

THISDAY learnt that the situation got awry when angry youths vent their anger on the men of the fire service who attributed their incapacities to non-functional equipment.

It was gathered that youths in their hundreds stormed the fire station burning tyres and in the process attracted the attention of the security officials who were said to have used live bullets on the protesters, killing three people in the process.

To battle the raging inferno, a reinforcement of fire fighters were mobilised from Ibadan, Oyo State capital and Ogbomoso a distance of more than 50 kilometres.

Although, the source could not give the exact identity of the security operative who fired the shots that fell three of the protesting youths, operatives of the state-owned anti-crime outfit codenamed: Operations Burst were fingered as suspects.

When contacted on the development, Public Relations Officer, Oyo State Police Command, Mr. Gbenga Fadeyi, denied that the bullets of the police fell the protesters, stating that investigation was ongoing to unravel the culprit.

He nevertheless assured that more men have been drafted to the scene to restore normalcy and help put out the fire out completely.

But wo≠rried by the development, a group of youth in the town, Oyo Global Forum, yesterday said a considerable part of the market would have been saved if the nearby fire station had functional equipment.

While condemning the government for not providing necessary equipment for the fire fighters to work with, especially in this particular season, the group also kicked against what it described as disproportionate use of force in response to angry residents by the security operatives which led to the death of three innocent and harmless youths.

The group, in a statement by its Secretary, Mr. Taiwo Hassan Adebayo, said it would demand from Oyo State Government due compensation and rebuilding of the market.

“Tragedies struck in Oyo Town in the early hours of Sunday, January 5, 2020, as fire razed Akesan Market, the town’s main commercial centre, almost entirely and the police killed at least three persons protesting failure of the fire service. Only a few shops and a filling station were not affected.

“Unfortunately, the Fire Service based in Oyo and just less than 20 metres to the market could not mobilise to stop the raging fire. The service said its equipment was not functioning. Fire fighters then had to be mobilised from Ogbomoso Town, 50 kilometres away, after massive damage.

“We condemn the failure of this government’s agency. But more disturbing is the disproportionate use of force in response to angry residents who were protesting at the gate of the fire service near Akesan in Oyo.

“Ogbomoso fire fighters are currently battling to put out the fire and we hope it is stopped before further damage.

“We sympathise with our people, particularly men and women trading at Akesan. It is a sad way to start the New Year.

“In due course, we will be demanding that Oyo State Government should compensate the traders and rebuild the market, while also enforcing stricter safety standards across the state. We will also not allow the police to get away with the killings in Oyo,” the group alleged.