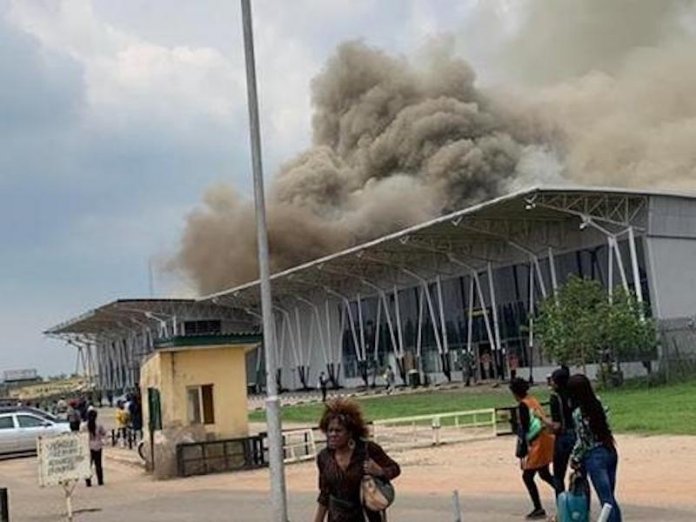 Bushfire, last night, gutted a substantial part of the runway and airside of the Port Harcourt International Airport, Omagwa, forcing the closure and reopening of the airport, after careful evaluation of the fire impact.

The inferno, which spread from outside the airport, forced three flights operated by Arik Air, Air Peace and Aero Contractors to return to Lagos without passengers, who had waited several hours due to inclement weather occasioned by the Harmattan.

Also, Max Air flight that was on ground could not take off while Dana Flight 368 from Abuja to Port Harcourt with 124 passengers had to return to Abuja, because of the inferno.

THISDAY learnt that the failure to put out the fire was because the airport did not have water and chemicals in its fire trucks.

This is coming 12 years after Sosoliso Flight 1145 crashed at the airport and the passengers, who could have been saved burnt to death because there was no efficient fire truck to put out the fire.
The fire was still raging as at 7.57pm yesterday, when this report was being filed in.

One of the passengers, also a pilot, told THISDAY that, “I have been here at PH international Airport since 4:00 pm, due to weather initially. When weather finally improved, all the airplanes: two Arik Air’s flights, Air Peace and Aero flights were announced to be arriving 6.55, 7.00, 7.10 and 7.20pm respectively.

“But soon after, Harmattan fire broke out along the runway sidelines, huge fire. At about 7.45pm, the radio announcement said all the airplanes were diverted back to Lagos and that the airport is closed. As I am writing, 7.57pm the fire is still raging.

“The fire trucks are their revolving and rigmarolling the runway, helpless. We hear they have no water to put out the fire. A big shame! Do you remember that Sosoliso flight crashed here in Port Harcourt 12 years ago and the airport fire service not having water was responsible for the deaths,” the pilot said.
However, for being unable to put out the fire, the airport management immediately announced the cancellation of all flights.

But soon after, the Federal Airports Authority of Nigeria (FAAN), in a terse statement by its spokesperson, Mrs. Henrietta Yakubu, announced the reopening of the airport.