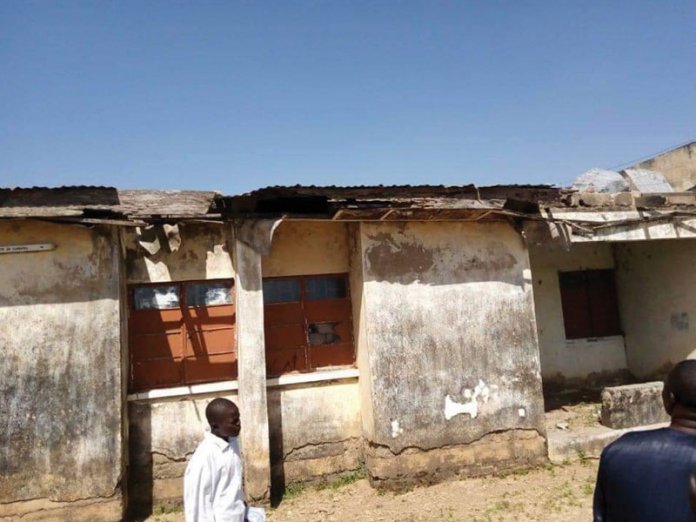 Francis Sardauna reports that years of neglect by successive administrations have left the students of Government Technical College, Funtua, Katsina State with no option than to share their hostels with rats

Adamu Bakori (not real name) lay helpless on a mat spread on the floor inside a ramshackle examination hall, which was converted to a hostel at Government Technical College, Funtua, headquarters of Funtua Local Government Area of Katsina State.

Bakori is one of the 1000 students that share this dilapidated accommodation with uncountable number of rats and bats. This scenario, according to him, has been their lot for the past five years.

Bakori, who could not control his emotion while narrating their ordeal to THISDAY wept while he said: “I will not return to this school again after this first term holiday. We sleep on the floor for lack of beds, amidst rats and bats.

“We don’t sleep during the rainy season because whenever it rains, water enters our classrooms and hostels. We always pray against rain because if it falls today, we will bail water from our classes and hostels for many hours.”

Our correspondent, who visited the school, was greeted with the strong and unbearablunbearable reek of rat and bat faeces.

The school, which was established to provide qualitative secondary education in the areas of Building, Painting, Wielding and Fabrication, Radio and Television to teeming youths from Funtua and its environs, is now in a horrible condition.

The college, located about four kilometres away from Funtua city, has its 13-year-old bulwark collapsed, triggering phobia among students that one day hoodlums would attack them.
It was observed that parts of the school buildings were in various stages of collapse and ruin. The six blocks of hostels are completely unusable.

Due to the dilapidated structures in the school, its management was forced to convert some of the classes including the school examination hall to hostels.

The beat-up hotels and classrooms have no beddings, thereby forcing five per cent of the students to sleep on mats spread on the floor even as they pray against rainfall, as stated by Bakori.
He said: “We barely sleep whenever it rains. The rain enters our hostels so we remain awake removing water”. They (teachers) have converted most of our classrooms to hostels, still it is not enough for the population.”

Moreover, it was observed that the school’s toilets do not function, compelling both students and some of the teachers to practice open defecation, against the recent declaration of state of emergency on sanitation by the state government.

The laboratories—physics and chemistry -are dilapidated and most of the books in the library were either stolen or have become outdated. Also, student performances in the West African Senior Secondary School (WASSCE) Examination worsened, with most failing to secure at least three credits to proceed to a higher institution.

THISDAY also reliably gathered that due to the poor state of the school, newly posted teachers and other staff decline to report, preferring to lobby for transfer to one of the newly renovated schools in the state.

A credible source in the school told our correspondent that the state government had sent its officials to ascertain the condition of the school “for more than five times but nothing has been done uptil date.”

He condemned the deplorable condition of the school and urged the state government to ensure its quick rehabilitation.

“This school needs total rehabilitation because all its classrooms, toilets, kitchen, hostels and examination hall are in states of disrepair. There are no adequate beds for students, as most of them do spread their mats on floor and sleep.

“Only senior students sleep on the dilapidated beds, leaving the junior ones with no option than to spread their mats on the floor and sleep. We have about 1,000 students with few desks for them to sit and receive lessons,” he explained.

The source added: “Due to inadequate classrooms in this school, the school management converted the Physics and Chemistry laboratories to classes. These students find it difficult to sleep during rainy season because whenever it rains water enters their classrooms and hostels.

“The school also need examination hall because the initial one has been converted to students’ hostel. The worst aspect of it all is that even the examination hall-cum-hostel has torn roof, so once it is raining students scamper for their safety.

“Another challenge that the school is facing is lack of toilets. As I speak to you, 99 per cent of students in this school are practicing open defecation which is unhygienic and totally unacceptable for a civilized state like Katsina.”

He, therefore, appealed to the state government, under the leadership of Governor Aminu Bello Masari, to save the school from imminent collapse, adding that most of the structures in the school were in dire need of repair.

Another resident of the town, who is also the National President of Arewa Youth Development Association in 19 states, Imrana Nas described the school as deteriorating, stating that the same situation was currently bedeviling Government College Funtua, Governor Masari’s alma mater.

He said: “This is the same situation the students of Government College Funtua, where Governor Aminu Masari graduated from are facing. The situation of the school is very bad.

“It is quite unfortunate if you come to Funtua and somebody should tell you this is Government College Funtua. Enter the school and see the state of its classrooms, virtually all the classrooms are dilapidated and are occupied by snakes.

“This is the school where His Excellency, Aminu Bello Masari, who was a former speaker of the House of Representatives and now a governor in the second tenure graduated and this is where he became what he is today.

“If somebody tells you that this is the school where the governor graduated from, you would not even believe it, because it is unbelievable. What is he thinking or doing? Is it not a shame for someone to say this is the former school of an executive governor?

“We are appealing to His Excellency to come to the aid of the school because it needs total overhauling. Let him come and renovate the classrooms for effective learning to take place.”

However, effort made by THISDAY to reach the Katsina State Commissioner for Education, Dr. Badamasi Lawal Charanchi for comment was futile as he did not answer telephone calls or reply text messages sent to his telephone lines.

Meanwhile, Governor Masari’s administration has rehabilitated 1,620 schools and constructed 464 new ones to tackle the menace of inadequate classrooms across the state.

In the case of deficiency of teachers, the administration had recruited about 1,957 teachers for primary schools and transferred some that have teaching qualification in the local government system into classrooms.

The administration is determined to salvage the situation on the shortage of teaching personnel, as it had recruited additional 7,500 teachers through it social investment programme (S-power) and the government has continuously embarked on quality in-house teachers’ training programmes in synergy with global partners and donor agencies.

The educational strides of the present administration in the state had significantly changed the dilapidated structures and lack of manpower it met in 2015 as stated by Governor Masari in his recent interview with THISDAY.

He said: “The average population was about 99 per class and there were some cases they had up to 200 and above as reported in a class that was designed to take maximum of 45 to 50.
“At that time we needed additional 19,000 classrooms in order to accommodate all the children. We all have deficiency in terms of qualified teachers who were 13,000. We had lack of chairs and desks of 28,000.

“We really started from an informed position. We say okay, what we will do in addition to provision of classrooms is first, let us rehabilitate existing structures and see that they become schools, because then they were not schools.”

Despite these numerable achievements in the education sector, Government Technical College, Funtua is in dire need of total rehabilitation, hence the need for the ‘people’s Governor’ to beam his Restoration searchlight on the school.