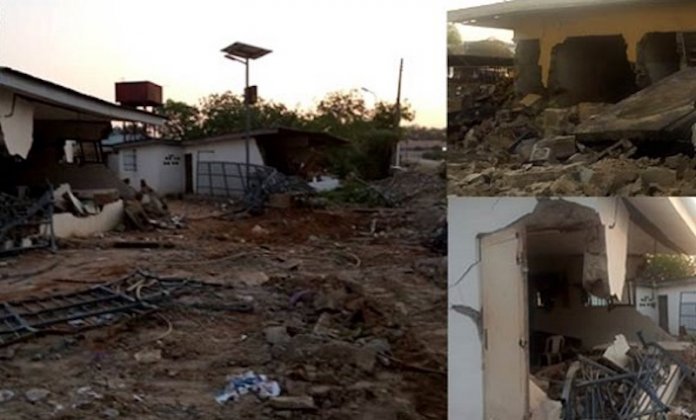 Watching the ensuing royal mud show coming from Kwara State, it is now safe to assert that the masquerade without a mask is the father of the masquerade that wears a mask. And in a life marked by unremitting adversity and misfortune, laughter is the best medicine and superior political therapy. That is perhaps why after the political charlatans, comic clowns and comedians have remained the most rewarded in the state.

In a political rugby however, when mud is thrown real hard, some of it is bound to stick. And in all that has trailed the recent revocation, reacquisition by the state government of the expanse of land said to belong to the late Oloye of Ilorin, Dr. Abubakar Olusola Saraki and the complete demolition of the famous ‘ile Arugbo’- charity home, nothing has escaped public attention even with the meta- commentaries swinging at each other while the single voice of authority appeared to be overtaken and replaced by many voices that talk back and to each other.

Whichever way one looks at the entire scenario, there was a mud slide and the swamp dwellers rose in furry as if stung by a swamp scorpion. But now that I hear the matter has shifted to the law court, it will appear indefensible for anyone to commit contempt ex facie curiae. While surveying the muddy melee from a safe distance, Senator Saraki who felt demeaned and frontally challenged in reaction delivered a hard jab at Governor Abdulrahman Abdulrazaq with a display of wit in a most lacerating manner. His message was clear in the language that it was delivered.

That Gov Abdulrahman ‘has crossed his red line’. His spontaneous reaction to government decision to revoke his father’s ‘property’ may be understandable and legitimate; to threaten a sitting governor in such an uncouth language is a swamp-talk and uncharitable. It is a joke taken too far. It is not just an unwise outburst, it is a punishable offence. But it should have occurred to Senator Saraki also that if he had in the past taken to his counsel as contained in his media reaction to the revocation, perhaps he would have saved himself some of his excesses that have piled to drive him this far.

In human nature knowledge gained through scientific exertion and certitude is always superior to knowledge based on superstition and obscurantist mythology. Both in orientation and perspective, the Saraki siblings differ. Senator Saraki does not need to invoke the spirit of his father to elicit sympathy and support in this matter; in our eyes he denigrated the same old man even in his face on account of his lust for raw power. Probably because of Kwara’s complicated conditions, there is no one to speak to our conscience anymore. No one also has been able to speak to Senator Saraki’s conscience in this matter and neither did anyone attempt to check his arrogance.

Two years into his tenure as the state governor (2003-04) and having measured Kwara’s literacy level and the low voltage courage of the people, he became brazen, contemptuously held the people and triumphantly played God. Even though we are yet to see the end of this matter, it is doubtful he can regain whatever remained as his lost ground and glory through orchestrated religious hysteria or his under-class impoverished womenfolk. If he had hoped to galvanise his supporters and diminishing admirers to stand in the way of this demolition he has missed it. That is the point he has now reached and it does not get more humiliating than that because history was farthest on his mind.

Before this incident or even as it occurred, did Senator Saraki remember the manner he harried a strong Ilorin indigene and retire army General, Abdullai Adangba into self exile? Can he quantify the untold hardship, suffering he brought on the family of the late Governor Mohammed Lawal or how he harassed and forcefully acquired the late Rtd. Gen. Abdulkareem Adisa’s property – another Ilorin strong man- just because the property was located opposite the government house? Can he also remember how the occupants of a storey building neighbouring his family house at Iloffa road were ejected and the property forcefully acquired because it overlooked his family house? How have Kwarans reacted to the incidents of many deaths that occurred in the famous charity home and who dared challenge him to account for all of these? But today Senator Saraki is growling over the revocation of a land that has no proper documentation with a threat to deal with a sitting governor. If democracy is suppose to appropriate what is just, then it cannot be used to abet the morally defective. Despite the imperfections of the Nigerian Constitution, it still contains a few provisions that make such utterances or threats impossible and such provisions may not preclude a ‘big boy’ like Senator Saraki from nursing unprovoked grudges against the governor but bars him from making untoward remarks.

No one should see Governor Abdulrahman’s action purely from any political angle or as a personal vendetta. It has little to do with both. It has everything to do with the improper manner the land was acquired even though it has been earmarked for public use only for successive governments to by-pass it. Sen. Saraki’s growling is only an indication of his base desire to massage his ego and pursue objects that no rational man can defend. Old pounded yam the Yoruba say can be very scalding. However, when the road bifurcates between the collective aspirations of a people and the inordinate personal ambition, the wise person not even driven by dark furies of personal insecurity knows which road to take.

Governor Abdulrahman only needed to be patient to see how far Senator Saraki can carry his threat. But there is opportunity in every crisis. Now it has become economically and politically imperative that Kwara must break loose from its geographical isolation. Its citizenry must not live in apprehension of an uncertain future. To avoid this, the governor must ensure a massive drive to open the state to the outside world as a priority in cooperation with the elite. The demolition of the charity home only needed to be complimented. Empires rise and fall and the rest becomes history.