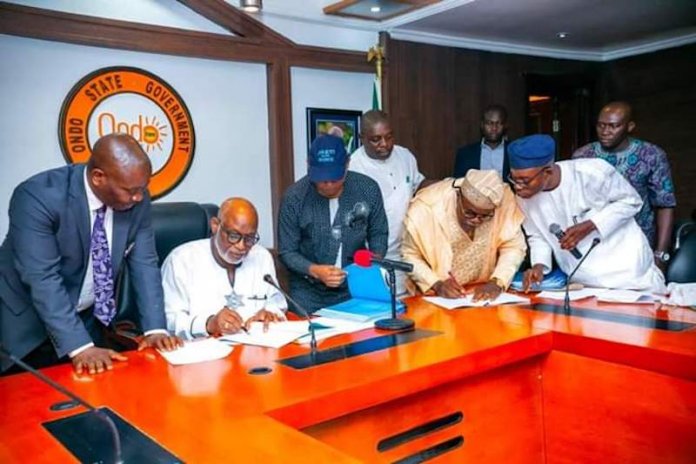 The signed budget was about N10 billion higher than N177.9 billion presented to the House of Assembly on December 19, 2019.

Also the sums of N82.700 billion and N80.470 billion representing 44.1 per cent and42.7 per cent are for Recurrent Expenditure and Capital Development respectively

Akeredolu said that the policy directions of the budget are largely the products of the inputs garnered during various Town Hall meetings with various stakeholders across the state and the five-point development agenda (the Blueprint to Progress) of the administration.

The governor identified unavailability and inadequacy of required fund as one of the key challenges to budget.

He said: “This is as a result of the recurring dwindling Ondo State’s share of the Federation Account occasioned by a fall in oil revenue which incidentally, and regrettably too, provides over 80 per cent of the country’s revenue receipts.

“The independent revenue, even though has increased substantially since the inception of our administration, has not grown to the level of delivering the State from depending on Federal Transfers.

“In view of the current state of finance, the responsibility of implementing the laudable projects as encapsulated in this budget rests on all of us.

“I, therefore, solicit the voluntary co-operation of all residents in the State with the staff of Ondo State Internal Revenue Service and the different revenue generation agencies in the State as they would be coming to request payment of various statutory taxes and levies.”

Akeredolu commended members of the Ondo State House of Assembly, particularly, the finance and Appropriation Committee for sacrificing their break to ensure the prompt passage of the bill into law.

He said the Commissioner for Economic Planning and Budget would give detail explanation on the budget.