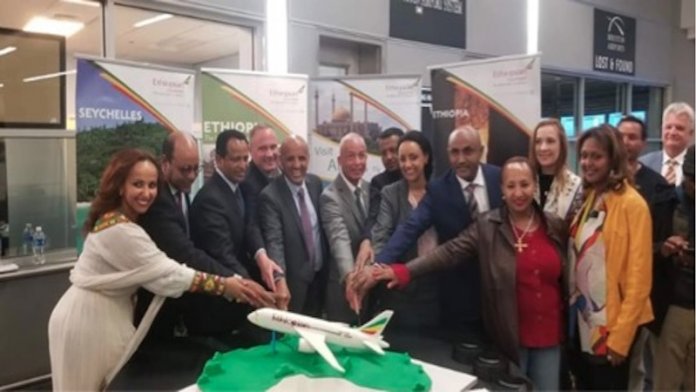 With 127th destination in the world and 130 aircraft in its fleet, Ethiopian Airlines, the biggest in Africa, has become the lens through which the global aviation industry views Africa. On December 16, it added another feather to its kitty when it launched a direct flight from Africa to Houston, Texas in the United States. Funke Olaode who was part of select journalists to witness the inaugural flight to Houston relays her exciting experience

For an Airline that prides itself as the biggest to emerge from the continent of Africa, there is always an urge to explore something new just as each passing day opens a new vista. It was not surprising when on December 16, Ethiopian Airlines broke the jinx while it launched its inaugural flight from Africa to Houston, becoming the first airline to connect Africa to Houston, Texas, through its famous Boeing 787 Dreamliner.

The journey to Houston, tagged as the coolest city in the United States, began at the Muritala International Airport where Nigerian passengers were moved to Lome, the capital of Togo for the historic flight. Although the management would have preferred the inaugural flight to take off from Lagos according to them, talks are ongoing with the Nigerian government for landing right.

Nevertheless, it was a smooth 25 minutes’ ride to Lome where passengers were treated to the airline’s hospitality on arrival with goodie bags that contained a pack of coffee and a mug. A brief reception was hosted for journalists and dignitaries before departing to Houston.

In her brief remarks, Vice-President of the Airlines, Rahel Assefal said, “Ethiopian Airlines is happy to connect more cities in America to Africa because of the connection between West Africa and Houston. We, as a company decided to route the Airlines from Lome, West Africa instead of home base in Addis Ababa. We hope this increases the relationship between Africa and America.”

With the boarding check formalities concluded, the direct flight took off around 2 pm Nigerian time. And the Airlines started on a good note being the first flight it almost filled to the brim. Around 6:30 pm Nigerian time, the management made a surprise announcement with the cutting of the cake to mark the historic flight. The passengers trooped to the front to catch a glimpse of the well-decorated cake cut at 37,000 feet at the Island of Praia, in the Cape Verde region. The non-stop 12 hours flight was second to none with its smooth ride and in-flight entertainment that glued its passengers to the screen. There was enough food while drinks, wine, and champagne flowed freely.

The plane eventually touched down at 8.09 pm local time at George Bush International Airport in Houston, Texas.
It was like a carnival of a sort as Ethiopian dance troupe were on the ground to welcome passengers to one of the busiest airports in the United States.
Basking in the euphoria of the airline’s historic achievement, the Group Chief Executive Officer of Ethiopian Airlines, Mr. Tewolde Gabrielmariam, said it was a commendable effort that took many years to materialize. “Thank God that we achieved it,” he stated.

The airline, he said, would operate three frequencies weekly from Lome (Togo) into Houston using the Boeing 787 Dreamliner, adding that with direct flight services into Houston from Lome, the airline has been able to connect Houston to the entire continent of Africa, Middle East, and Asia.

He pointed out that the new direct flight was the airline’s 127th destination in the world, asserting that the connections have been designed in such a way that it will be one of the most direct and fastest routes for Africa, the Middle East, and Asia.

Gabrielmariam added that Houston is the fifth gateway in North America and the fourth in the US next to Washington, New York, and Chicago. On the opportunities of flying directly from Nigerian if giving the landing rights, The Group CEO said Houston is strategic as it has the largest concentration of Nigerians in the United States with a 250,000 population, making it a win-win situation for the airline and Nigerians in the United States through seamless and hassle-free connection.

“The connectivity that we have established is beyond Lome as we have set out to serve our esteemed customers. It is the fastest and shortest in the history of the aviation industry.”
“Ethiopian Airlines is now the largest airline on the continent with a fleet of 130 aircraft. It is by far the airline with the most extensive network in the world connecting Africa to the rest of the world and Africa within,” said Gabrielmariam.

Speaking further, he said the airline has been working very hard for a long period of time to fly into Houston but thanked God that the dream finally became a reality on December 16 with the inauguration of the direct flight into Houston, saying: ‘‘This is also a very important connection for East Africa, South Africa, and Central Africa and also a very important connection to West Africa. This is the only direct connection to West Africa because we are using our second half in Lome for West Africa to connect passengers to the entire West and Central Africa.”
The Ethiopian Airlines boss commended the airline’s management team and the over 16,000 workers across the globe for working day and night to ensure that the airline shines in the sky.

Gabrielmariam said the choice of Houston was fitting because “I have never seen an airport so generous in terms of hospitality like Houston Airport. It is a customer-focused airport”. According to him, Houston is known to some international corporations, including some of the largest companies in West Africa, adding that Houston will now have more direct access to West Africa, a key global market for any serious trading partner.

Corroborating Gabrielmariam, Executive Director, Houston Airport, Mario Daiz, said the historic flight would not only improve connectivity between Africa and Houston, but the airline would also contribute about $100 million into the US economy yearly.

He revealed, “Houston is now officially reconnected to the African continent through the efforts of Ethiopian Airlines to make business seamless for international travelers and others in the corporate world. Through the flight to Houston, Ethiopian Airlines is creating unity among people of diverse groups, promoting culture and strengthening values.”

Expressing his delight at the new partnership, Daiz thanked the management of the airlines for introducing the airlines to connect Africa to America particularly Houston because “you have seen values in us”.
“This route will not only save time, but it will also provide job opportunities, then inject multimillion dollars into the Houston economy,” he added.

In her remarks read on her behalf, the Congresswoman representing the district in Washington, DC, Sheila Jackson, also applauded the historic partnership between Houston and Ethiopian Airlines direct flight from West Africa to the city of Houston.

“This is historic and it will enable residents of Houston particularly the African Community the opportunity to experience a direct flight home. We welcome this partnership as it promotes trade and business between Addis Ababa in West Africa and the City of Houston, Texas,” she said.

The inaugural celebration continued on December 17 at a business luncheon organized for the airline by the US Bilateral Chamber of Commerce and Houston Airport at Hotel Zaza, Houston, the United States where members of the diplomatic, business community and oil company executives registered their presence.

In his speech, Ethiopian Ambassador to the U.S., Mr. Fitsum Arega extolled the airline’s consistency, professionalism, and excellence in its operation. He said that Ethiopia had been expanding its network in trade and investment, adding that one of the major reasons why Ethiopian Airlines had to fly to Houston was the presence of large Africans in the city.

Arega said that there are huge opportunities for Ethiopia to strengthen investment opportunities to Houston, adding that with about 110 million population, Ethiopia is the second-most populous country in West Africa and one of the fastest-growing economy in the world.

“With 10 percent annual GDP growth with a significant reduction of poverty, reforms in the country have eased the cost of doing business and private investment participation is now encouraged the country. The newly established U.S. Development Finance Corporation has promised to provide five billion dollars to support America and local businesses to invest in Ethiopia,” said Arega.

Also speaking, the U.S. Ambassador to Ethiopia, Mr. Micheal Raynor, said Ethiopian Airlines would promote commerce, trade, and investment between the two countries. Raynor urged business communities in Houston to tap into the new business opportunities opening up across Ethiopia. He said that the newly inaugurated route would make millions of people connect to Houston and transact business.
Some of the passengers who spoke to Thisday on the inaugural flight expressed satisfaction at a high level of hospitality and professionalism.

Obinna Oruche, a Nigerian medical doctor based in Houston, said: “I have been in the US for 10 years but try to visit Nigeria once in a year. This inaugural flight is a big deal and relief considering the hassles of travelling from Houston to Addis Ababa, which is 16 hours. With this, we don’t have to fly from Addis to Nigeria, which takes another four to six hours sometimes. With Lome is 12 hours. So the business move is good. I want to commend the Ethiopian Airlines management for this initiative. It has been a pleasant experience for me. The plane is clean, neat. The hostesses are good. They had this permanent smiles on their faces. I will be flying them more often.”

Sharing her own experience, Wese Obiabaka, a mother of two young boys, stated: “I didn’t know it was an inaugural flight. I just found out online. I am lucky to have flown the airline and it is my first time flying the airline. I have two kids and it is the only flight that we found that has the shortest time. Others have longer waiting periods like 11 hours. But this is short and we opted for it. It is epic. The experience so far has been wonderful. It is an airbus. I like air hostesses. They are free; not tight-fisted. They are going to enjoy Nigerian patronage because Houston is like an extension of Lagos.”

An Ethiopian, Solomon Tamrat, who was flying to the United States for the first time explained: “This is my first time in the (United) States and it is a good experience for me. The airline is good. The service is good. And being an Ethiopian, I can say Ethiopian Airlines is me and I will continue to fly it.” 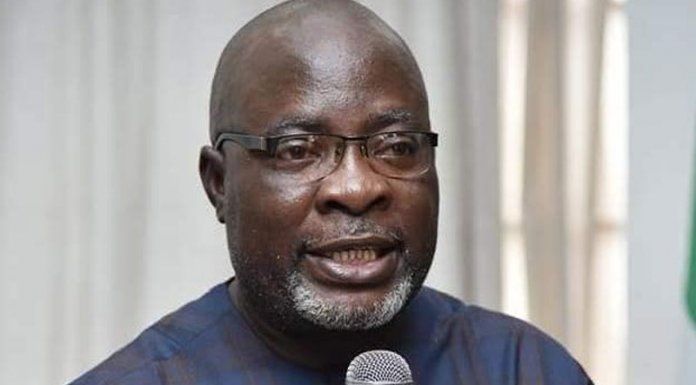 Bayelsa: Thou Shall See the Land But Will Not Set Foot on It