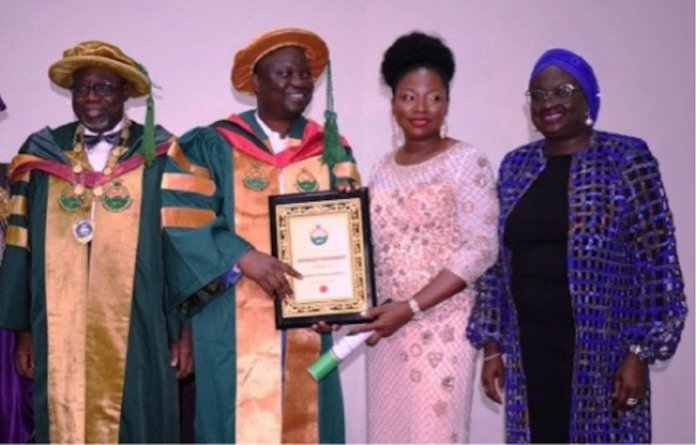 Excellence is a multi-flavoured delicacy; there is a satisfying joy from the anticipation of eating, another from crunching and swallowing, another from having others recognize the tummy once flat and now full, and then the final of having accomplished a vital task. This is, doubtless, the experience of Lekan Adebiyi.

There is almost no greater honour than to be acknowledged by members of like a trade. Such is the outstanding ceremony held by the Nigerian Society of Engineers (NSE) for the Managing Director and Chief Executive Officer of LARALEK Group of Companies, Adebiyi, FNSE, for his numerous and notable achievements and accomplishments in the construction industry in Nigeria.

The formality, which was held in Ikeja, Lagos, was graced by the eminent of the eminent, including the honchos of the NSE, the Deputy Governor of Ogun State, Mrs. Noimot Salako Oyedele, Special Adviser to Sanwo-Olu on Budget, Mr. Bayo Shotade, Accountant General of Lagos State, Mr. Abiodun Muritala, Executive Secretary, Lands Bureau, Mrs. Lolade Ajetumobi, former Commissioner for Works and Infrastructure in Lagos, Engr. Ade Akinsanya, former Commissioner for Transportation in Lagos, Comrade Kayode Opeifa, among many others.

During his opening remarks, the NSE President, Adekunle Mokuolu, said the honorary fellowship conferred on Adebiyi was on account of his countless exploits and achievements which have been a tour de force in the Nigerian construction sector over the last few years. The association also added that LARALEK was one of Nigeria’s foremost indigenous construction companies.

According to Mr. Mukuolu, the fellowship is the zenith of honours available for individuals whose achievements in construction are primo, even though these individuals did not study engineering.

Adebiyi, who was also styled as worthy in character, in knowledge, in performance of excellence, was charged with assisting and guiding others in the construction zone into his level of output, to have an inclusive and encompassing indigenous aspect to national development.

Ogun State Deputy Governor, Mrs. Noimot Salako Oyedele, remarked on the LARALEK boss, drawing attention to the company’s construction of over 1,000 roads, seven bridges in Lagos, among others. She also extolled Adebiyi’s leadership of 2,000 employees, including 350 engineers and 55 expatriate workers.

In response, Adebiyi expressed his gratitude for the honour, attributing his successes to God’s grace and several individuals who bore the brunt of his endeavours alongside him