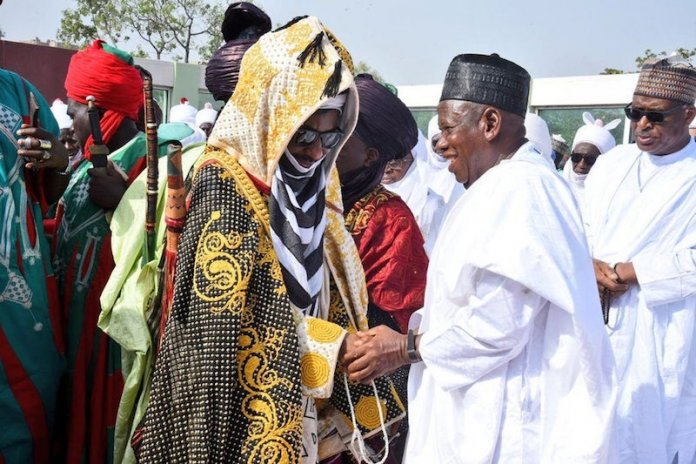 President Muhammadu Buhari’s express support for a lasting solution to the rift between the Emir of Kano, Mohammed Sanusi II, and the state governor, Abdullahi Ganduje, was behind the constitution of the General Abdulsalami Abubakar peace committee, THISDAY has learnt.

Although the president was not aware of how his Chief of Staff, Mallam Abba Kyari, and Ekiti State Governor Kayode Fayemi, the main drivers of the peace initiative, came up with the choice of Abdulsalami and other members of the committee, Buhari’s disposition to a peaceful resolution of the rift helped a great deal. This disposition, THISDAY gathered, also facilitated the Abubakar committee’s smooth merger of an earlier committee led by Fayemi and the one set up by the Northern elders into one standard initiative to explore peaceful options and end the hitherto intractable feud between the governor and the emir.

Tensions in the relationship between Ganduje and Sanusi had come a head in May, when the governor signed a new law splitting the Kano Emirate into four, effectively whittling down Sanusi’s influence.
A source privy to the origin of the latest initiative to make peace between the two men told THISDAY that the initial effort to reconcile Sanusi and Ganduje had broken down, when a Kano court ruled that the governor did not follow due process in the creation of the additional emirates.

According to the source, after the committee had met with both men and convinced them on the need to sheathe their swords, they also agreed that the next line of action would be determined by the outcome of the court ruling, a decision all parties consented to.

However, when the court ruling faulted the process that created the four new emirates, the governor, the source said, did not like the idea. He then returned to the Assembly to perfect the process, a move the peacemakers suspected could completely vitiate all the gains made in reconciliation effort.

The source said when Kyari and Fayemi briefed the president, he made it clear that since it was an issue that spoke directly to local government administration, he could not be seen to be interfering with the process of governance, but he could do a lot through the back channel.

Those trying to calm the situation had maintained that the issue was not about the two feuding parties, but the state and the Emirate as a critical historical institution. This thinking also formed the basis of the president’s support for the efforts to end the rift.

It was based on this understanding that a mini panel, headed by Fayemi, was set up to come up with modalities on the resolution of the rift. The Fayemi panel, it was gathered, gave birth to the Abubakar committee, a gathering of men of influence, who could pull off the desired result.
Sources said the maiden meeting of the Abubakar committee was chaired by Fayemi, who allegedly met separately with Sanusi and Ganduje. The two men were said to be conciliatory in their disposition to the peace initiative.

The source hinted that not only were members of the committee happy to be part of an initiative to end the feud between Sanusi and Ganduje, the gladiators also showed readiness to end their misunderstanding once and for all by immediately telling their supporters to stop proxy attacks.
A 10-man peace committee headed by Abdulsalami was set up last week and mandated to end the feud between Ganduje and Sanusi.

The statement said the committee was working with the full understanding and cooperation of the federal government. It added that initial contact had been made with Ganduje and Sanusi on the need to embrace truce in the interest of peace and development of the state.

In addition, the statement stated that the governor and the emir were implored to direct their supporters and sympathisers to refrain from “making statements declarations, releasing songs, writing articles, and taking other actions inimical to the spirit and process of good governance, order and reconciliation.”
The two leaders also agreed to hold back from taking any further actions until the committee has finalised its assignment