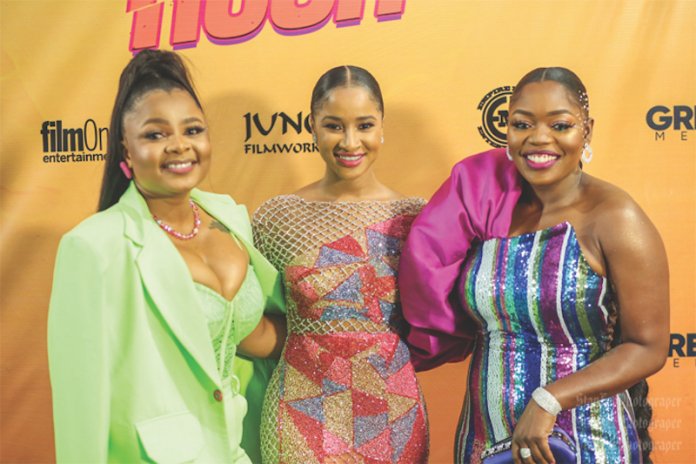 You missed big time if you weren’t at the themed premiere of Jade Osiberu’s ‘Sugar Rush’!

The red carpet was filled with the most colourful and stunning looks from our favourite celebrities and style influencers at the Landmark Event Centre, Oniru, Lagos, the hall was full as stars came out in their numbers for the grand premiere. The tag line for the premiere theme was “blind your haters, and it seemed like stars were out to do just that!!

The theme for the night was Candifornia and the stars did not miss a bit!!1 Bang on theme were celebrities such as Rita Dominic, Chika Ike, Dr Sid, Ebuka Obi-Uchendu, Dare Art-Alade, Uche Jumbo, Funke Akindele-Bello influencers like Idia Aisien, BamBam, Bayo Oke-Lawal,

Tomike Adeoye and guests amazed us with their astonishing choice of outfits.

At the UBA sponsored premiere, guests were treated to an array of sweet tooth brands for their pleasure such as Baileys, Krispy Kreme, Hans and Rene, Moët & Chandon, Dominos, Budweiser, Schweppes and Potato twirl.

Jade Osiberu, who also produced the big box office Nollywood hit movie “Isoken” and TV series, “Rumour Has It” , had this to say “Sugar Rush is an exciting mixed-genre film that promises to be unlike anything you’ve ever seen. Expect the unexpected this Christmas.”

The movie true to its name is tells the story of sisters Susie and Sola Sugar who stumbled on $800,000 and succumbing to greed.