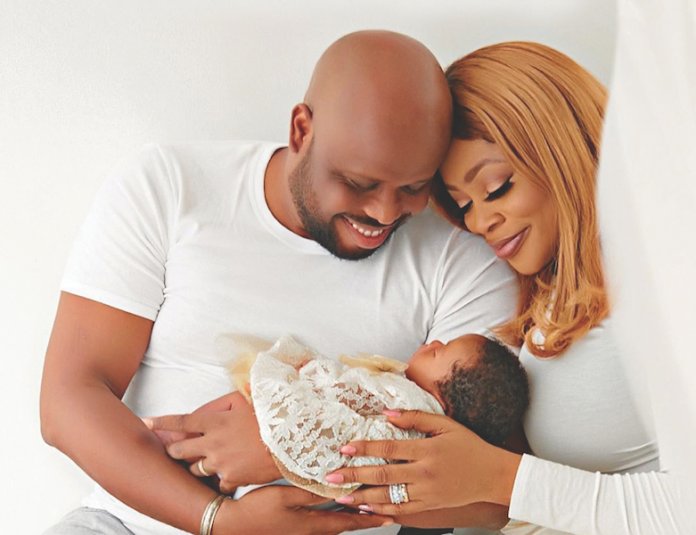 Few people knew about it until her spiritual father, Pastor Chris Oyakhilome broke the news at his International Music and Artistes Awards event in Lagos last month. The big news of the arrival of her baby at the age of 46, five years after marriage, created palpable excitement for the popular gospel artiste, Osinachi Kalu simply known as Sinach and her Pastor husband, Joseph Egbu. Described as a “miracle” child, the adorable baby boy was for the first time on December 22 shown to the world by the celebrated gospel singer, writes Ferdinand Ekechukwu

Five years of marriage without an issue must have put huge pressure on her, particularly at age 46. But the maternal reprieve came; a work of God and a walk in abundance to her childbirth journey. Described as a miracle child, the adorable baby boy would for the first time on December 22, 2019 be shown to the world by the celebrated Nigerian gospel singer in wishing everyone the very best the season comes with.

Osinachi Kalu (Sinach) and her husband, Pastor Joseph Egbu gave a first look at their bundle of joy in celebration of the season via a postcard image of the family. Sinach who got married in 2014 in a very beautiful wedding ceremony, welcomed this very first child in November. Few people knew about it until her spiritual father, Pastor Chris Oyakhilome broke the news at his International Music and Artistes Awards in Lagos, saying “Thank you for that song, we are all excited with what the Lord has done in your life, of course in the life of many others standing with you here we just love you.

“And I told them, you just had a baby! So everybody got excited.” And to top all, she was declared Artiste of the Year 2019 at the annual music award for her song, “There’s An Overflow” with a bountiful reward of US$100,000 prize for the single. Following the massive congratulatory messages she received, she took to her Instagram account to thank everyone. Sharing a sweet photo with her husband, she simply captioned: “Thank you for the outpouring of love!! We love you too”

The big news of the arrival of her baby though ushered in palpable excitement for the popular gospel artiste known for hits such as Way Maker and I Know Who I Am. Her album Way Maker became qualified for Gold certification by the Recording Industry Association of America (RIAA) in 2018. With the title song of the same album on March 7 2019, Sinach became the first gospel singer from Nigeria to obtain over 100 million views of a single video on her YouTube Channel, making her the only female gospel artiste from Nigeria and Africa at large to hit the landmark and the third Nigerian to achieve that feat, next to Davido and Yemi Alade, who achieved the same feat in December, 2018.

Being a top gospel singer/songwriter, Sinach has written hundreds of awe-inspiring songs from her heart and known globally for several of her songs. Some of her songs including, “Great Are You Lord”, “Overflow” and many others like “Jesus is Alive”, “Awesome God”, “For This”, “This Is my Season”, “I Stand Amazed”, “I Know Who I Am”, “The Name of Jesus”, “Simply Devoted” are noted as equally popular ones. Once speaking on how she came by her stage name Sinach, she said: “I chose that from my name Osinachi because it is easy to pronounce and catchy”, like her songs.

These songs have turned into anthems in many homes and churches and reached millions of people all over the world by fostering encouragement, hope, healing, and strengthening their belief. As a child growing up in a family of seven where, she is the second daughter, the blessed gospel musician had a dream where she saw herself singing to large crowds, but didn’t actively pursue anything musically as a career besides joining the choir and also working as an administrative staff in the Church.

“I had a dream as a little girl that one day I will change people’s lives. I would have dreams of singing to many people from different nations and tongues but when I opened my eyes I was right there still on my bed waking up to the sound of my father’s early morning BBC radio news to start my seemingly uninteresting chores before school.

“It was just a dream. As the years went by, my parents insisted that I train my mind. Then I met Jesus and he changed my purpose and changed my reason for singing. Challenges along the way built my character. Like clay, I’ve been beaten, poured upon, torn apart, rolled over, put into the fire, and continuously moulded into shape in the process of making me.”

According to her, music was her dream. Her father objected to her musical career. He told her she would go hungry as a musician that musicians amount to nothing. It was when she met Pastor Chris that he changed her perspective. He told her she could be anything she wanted to be in life with God’s word.

Sinach is a spiritually gifted woman in terms of gospel music. She has given hope to the hopeless all over the world through her inspiring songs. She is a multiple award-winning song writer, recording artiste, producer and worship song leader. Despite the criticisms from her father, she started singing at a young age, and she has received pleasure by doing this.

In 2017, she was inducted into the Bethlehem Hall of Fame, joining Dwayne Johnson, Pope Benedict XVI and a host of other internationally recognised celebrities on the list. Aside, Sinach became the first gospel artiste from Africa in September 2019 to tour India, headlining concerts with several thousands in attendance. She has nine albums and many hit singles to her credit. The talented songstress has also performed in several countries including Kenya, South Africa, US, Canada, Trinidad and Tobago, Jamaica, Grenada, Uganda at the Miracle Centre Cathedral, Barbados, The British Virgin Islands, Zambia, Saint Maarten and UK.

Be it fate or faith. Miracles defy our understanding. They can’t be explained. In Scripture, we can read about many miraculous births, experienced by the likes of Hannah, Elizabeth, Sarah, and Rebekah’s but this story is the story of Sinach, the gospel minister and senior worship leader at Believer’s Loveworld International, also known as Christ Embassy. She experienced a miracle, her own miracle. She welcomed her first child at the age of 46, after five years of marriage.