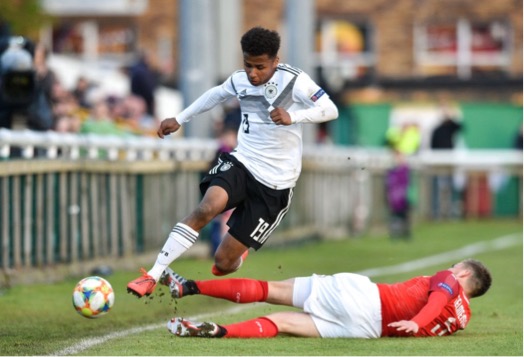 Karim Adeyemi remains one of the hottest teenagers in world football. No wonder Spanish giant, Barcelona, has been on his trail for a while. For soccer loving Nigerians hoping that he would one day play for his fatherland, they’ve got a shocker coming, as the prodigy says he wants to star for Germany

In a recent interview, Barcelona-linked striker Karim Adeyemi has revealed the senior national team he wants to represent in future.

Born in Munich to a Nigerian father and Romanian mother, the Red Bull Salzburg starlet qualifies to represent the Super Eagles, The Tricolours and Die Mannschaft.

Germany are ahead of Nigeria and Romania in the race for Adeyemi’s services after he became provisionally cap-tied to his country of birth in a European U-17 Championship qualifier against Belarus on March 20, 2019.

He was awarded the Fritz Walter Gold Medal for the most promising talent in his age group by the DFB, following in the footsteps of Germany stars Timo Werner, Leon Goretzka, Emre Can and Mario Götze who have all won the prestigious award in the past.

“I want to achieve what these players have already achieved. That is why this award makes me very proud and is also a great motivation to continue on my path.”

With age no longer on the side of Barcelona striker, Luis Surez which had made the Uruguayan slow down considerably, Barca is looking for a long standing replacement for the former Pichichi winner and their search light had turned to the direction of German-born Nigerian youth prodigy

With the La Masia not producing the players for Barcelona as before, the Catalan giants have now resorted to investing on young players in Europe and other parts of the globe where they can get promising players.
Barcelona are prepared to splash out €8m to sign Germany Under-17 international striker Karim Adeyemi. The 17-year-old joined Red Bull Salzburg in the summer of 2018 and is currently playing for their feeder club FC Liefering in the second tier of Austrian football.

Adeyemi has also been prolific at youth international level for Germany – he impressed for Die Mannshaft’s Under-16 team and then netted three goals in seven caps for the Under-17 side.

He is said by the report to be the ‘bet’ of Barcelona director of youth football Patrick Kluivert and they are said to view his potential to being similar to that of 16-year-old rising star Ansu Fati.
Adeyemi, who has a Nigerian father and Romanian mother began his youth career at Bayern Munich and went on to spend six years at SpVgg Unterhaching.

Barcelona are trying to replenish their young attacking options after seeing the success of Fati this season, but Salzburg who signed him for €3.5 million in 2018 are not ready to make the signing of Adeyemi easy on Barcelona.

His contract at Salzburg runs until the end of the 2020-21 season, although for the price he is rumoured to go for, that contract won’t matter. The goal for Barcelona appears to be to grab a few U-20 strikers and a few strikers in their 20s, creating a diversity of play styles in different age groups.

The former Bayern Munich star, Adeyemi has been reportedly named among the most experienced young players in Europe, having made the cut after being picked by CIES Football Observatory from 22 European competitions per year of birth.

The rankings were compiled using what is said to be exclusive methodology weighting domestic league minutes played by footballers during the last two years according to the sporting strength of employer teams.

For players born in or after 2001, Red Bull Salzburg striker Adeyemi ranked eighteenth and he was the only player of Nigerian descent that made the list as none made the cut for the 1998, 1999 and 2000 age groups.

In eight outings for Germany’s U-16 and U-17 national teams, the centre forward has found the net twice.
Adeyemi started his career at Bayern Munich before moving to SpVgg Unterhaching and was snapped by Red Bull Salzburg in the summer of 2018.

According to the report on El Mundo Deportivo, Barcelona are said to be ready to pay eight million euros for the signing of Adeyemi. And should the Catalan giants go on to pay this amount, then Karim Adeyemi will become the most expensive U-18 player of Nigerian descent in history.