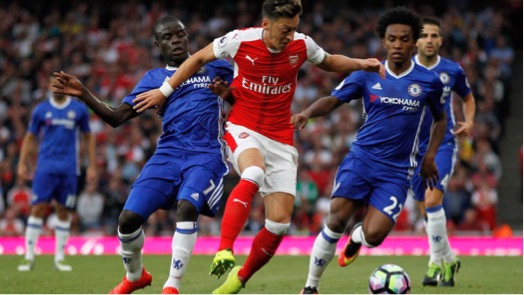 Two longtime Premier League midfield generals meet for the first time as managers when Arsenal and Chelsea tangle in a London Derby, with Frank Lampard and Mikel Arteta badly needing victory at the Emirates Stadium. Arsenal drew 1-1 on Boxing Day in Arteta’s first match in charge of the Gunners, while Chelsea lost 2-0 to Southampton at Stamford Bridge on the same day. An Arsenal win would therefore open the door for either Sheffield United or Tottenham Hotspur to move into the Top Four

For the third time this season Chelsea will face a team helped by a new manager and the past two experiences do not bode well for Frank Lampard’s side.
Sunday afternoon’s trip to Emirates Stadium will see Mikel Arteta take charge of his first home game as Arsenal head coach.

And having lost to Valencia and Everton, both boosted by new faces in the dugout, Lampard will be desperate to avoid a third loss to a set of players looking to impress, especially with their grip on fourth position loosened by the Boxing Day defeat at home to Southampton

The Spanish side won 1-0 at Stamford Bridge in the Champions League Group H opener back in mid-September with Albert Celades taking charge of just his second game.
Valencia were in disarray at the time and their players were staging a silent protest but they still came out on top as Ross Barkley missed a late penalty.

Everton, meanwhile, were buoyed by Duncan Ferguson being put in interim charge following Marco Silva’s sacking earlier this month. At a racuous Goodison Park, the hosts dominated Chelsea to win 3-1.
Arteta started off his spell in charge of the Gunners with yesterday’s 1-1 draw away to Bournemouth.

Frank Lampard is expected to make several changes following the loss to Southampton, a third home defeat in four, with Mason Mount and Mateo Kovacic both set to return to the starting line-up.

Frank Lampard was left frustrated once again as his Chelsea side fell to a 2-0 defeat at home to Southampton on Boxing Day.

Michael Obafemi opened the scoring for the Saints in the first half, before Nathan Redmond secured a vital three points for the visitors, who executed their game plan perfectly at Stamford Bridge.

The defeat means Chelsea’s advantage over Tottenham in the race for the Premier League top four is now back to three points, with Spurs bouncing back from their defeat to the Blues by beating Brighton 2-1 in the early kick-off.

And Lampard concedes his team need to learn if they’re to overcome sides on their own patch, having fallen to a second successive defeat at Stamford Bridge.

“It’s a similar story, it felt the same as recent games,” Lampard told Amazon Prime.
“You have to credit Southampton for that, they were organised and they got their goals on the counter. But we need to be better at breaking teams down, simple as that. We need to do more. I think we’ve got enough to be better than we were today, and what we’ve been at home.

“It needs to be a quick learning process now for us. There’s a difference between going to Tottenham in a game that opens up because they have a go at you, and being able to do things with the space that opens. But when there’s no space, and it’s close, that’s a different question, and we’re not answering that.”

Meanwhile, Rob Holding could make his return to the Arsenal squad to face Chelsea on Sunday in what could be his first game since the 2-0 defeat away to Leicester back at the start of November.

The defender missed the 1-1 draw away to Bournemouth on Boxing Day, but could be named in the squad for the meeting with Lampard’s side.
Holding’s return at the back will come as a major boost to Arteta and the rest of his squad. Not only is it another player back fully fit, but it gives the new Arsenal boss another option at the back.

The Gunners have struggled for any form of consistency in their defensive set-ups this season.
Earlier in the campaign, it looked like Holding could go on to nail down a place in the team, but injuries have once again got the better of him.

Given the lack of consistency at the back, the former Bolton man will be hoping that he can come in and secure a place in Arteta’s plans relatively quickly.

MATCH FACTS
• Arsenal have won two of their last three Premier League home games against
Chelsea (D1), as many as they had in their previous 12 against the Blues (D5 L5).
• Chelsea lost this exact fixture 2-0 in January – they’ve not lost consecutive league
games against Arsenal since October 2011, while they last lost back-to-back away
league games against them in October 2003 (a run of three).

• Arsenal have never lost a Premier League home game against Chelsea when
they’ve scored the first goal, winning 11 and drawing four of their 15 such games.
• Arsenal lost their final league game of 2018, 5-1 against Liverpool. They’ve not
lost their last league game in consecutive calendar years since 1994/1995 (vs QPR
and Wimbledon).