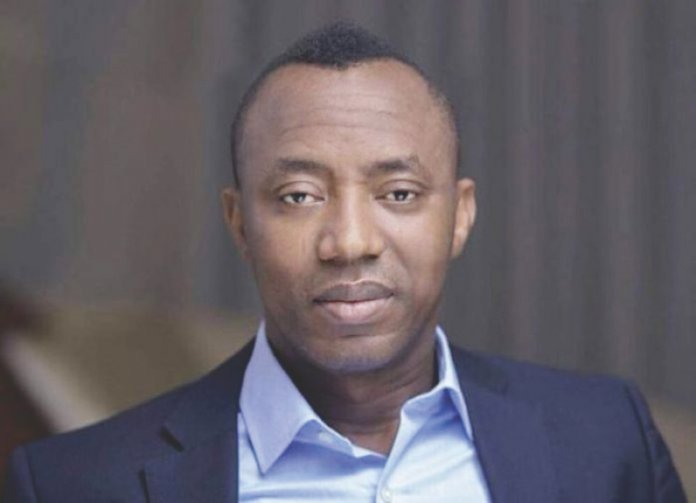 At last, human rights activist and founder of Sahara Reporters is out on bail, writes Tony Ademiluyi

Fans and supporters of Comrade Omoyele Sowore were agog with joy when he was released on Christmas Eve. Their joy knew no bounds as he will most likely be reunited with his family to spend the Christmas. He had been in the DSS custody since August 3rd when he called for a revolution and the government agency denied his release twice despite two subsisting court orders that he be released on bail. He was released on December 5th only to be rearrested in Gestapo- style by the DSS in the court premises which sent the Judge, Justice Ijeoma Ojukwu scampering into the inner chambers for safety.

Sowore was born 48 years ago in a small town in oil rich Ilaje in the present day Ondo State to a peasant farmer. He had to fend for himself very early in life and by the age of nine was fishing to contribute to the family pool and by 12 was riding a motorcycle popularly called okada to bring home the bacon for the family.

He started his activism exactly three decades ago in 1989 when he actively participated in anti- structural adjustment program riots during the regime of General Ibrahim Badamosi Babangida who cloned the SAP from an IMF and World Bank recommendation.

He later became the Student Union President of the University of Lagos at the age of 21 in 1992 and fought the school authorities in order to ensure a better deal for the students. He was also a thorn in the flesh of cultists as he did his best to battle the menace to a standstill.

He was twice expelled by the university authorities and was reinstated through court orders. He played an active role during the annulment of the June 12 presidential elections won by the presumed winner, Chief Moshood Abiola in 1993 and was in the streets to ensure justice for the business mogul.

In 1999 shortly before the country’s return to civil rule, he travelled to the United States on medical grounds and decided to take up residence there in order to get the best medical care which was sadly not obtainable back home.

He acquired a Master’s Degree in Public Administration from the prestigious Ivy League, Columbia University in New York and worked in a Roman-Catholic Charity to help the poor living in the slums of the world’s economic nerve centre.

He was disillusioned with the democracy that he risked his life in fighting for as the politicians in his native Nigeria were massively siphoning the commonwealth of the nation and impoverishing the masses. He teamed up with a Nigerian resident in New York, Daniel Elombah who formed a website – Elombah.com to hold the government to account in 2005. The duo fell out a year later and he founded Sahara Reporters which focused on anti-corruption and human rights in 2006.

The website soon became the dread of the corrupt politicians in Africa’s most populous nation and was soon dubbed the wikileaks of Nigeria as it broke numerous corruption stories that the scared traditional media wouldn’t touch with a long pole. He pioneered citizens’ journalism and greatly held the government to account.

The credibility of his media platform made the likes of Ford Foundation and Omidyar Network give him grants.

He decided to join partisan politics this year by contesting for the highest office in the country – The Presidency and travelled round the country visiting about 30 states in the process to sell his manifesto to the public. His candidacy brought hope to the beleaguered people and he was the Nigerian clone of Franklin Delano Roosevelt whose New Deal changed the face of American politics forever.

Tragically he lost as Nigeria has a way of rejecting her best and brightest. They rejected late Chief Gani Fawehinmi, Fela Anikulapo-Kuti, Abiola, Pat Utomi. It was clear that his time hadn’t yet come.

He called for a revolution to hold on August 5th but was taken into custody by the DSS two days earlier where he had been till he was released.

The US government through her Ambassador and the Congressman representing his constituency in New Jersey piled a lot of pressure on the Buhari government to release him. His wife, Opeyemi based in the US was also vocal in her call for the release of her husband whose only crime was in speaking up against a dictatorial administration.

We are glad that he has finally been released from the DSS custody which gives meaning to the Christmas celebrations for him. We hope his trial will be free and fair.