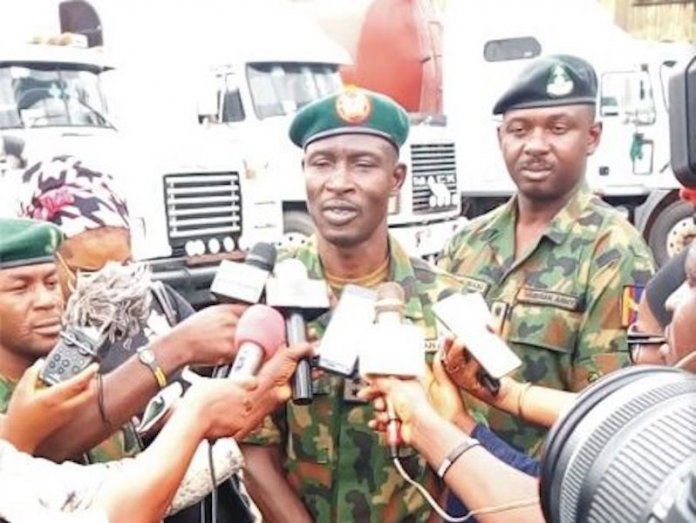 Troops attached to Operation Lafiya Dole have lowered Boko Haram a flag hoisted in Fadama town in the state, after overrunning the insurgents.

The terrorists were subdued by the superior fire power of the troops.
Dozens of fighters driving trucks and motorcycles were said to have stormed Kwarangulum late Tuesday, shooting fleeing residents and burning homes after looting food supplies.

Boko Haram and its IS-affiliated Islamic State West Africa Province (ISWAP) faction have recently stepped up attacks on military and civilian targets in the North-east.

The jihadists were believed to have attacked from Boko Haram’s nearby Sambisa forest enclave.
In April, Boko Haram raided Kwarangulum, 16 kilometres (10 miles) from Chibok, stealing food and burning the entire village.

During the operation, the troops were said to have clashed with the insurgents, which triggered a firefight.
“The Boko Haram insurgents were decisively dealt with, forcing them to hurriedly flee the location in disarray.

“Troops destroyed all of the criminals’ structures, farmland, harvested grains stored in underground bunkers and one Lister grinding machine”, it said.

The update signed by the Nigerian Army Operations Media Coordinator, Col. Aminu Iliyasu, said the troops “in another encounter at Fadama village, the criminals’ flag hoisted on a tree was captured and immediately lowered after the troops had effectively subdued the criminal insurgents with superior fire power forcing them to flee in disarray.”

“During the encounter, one Boko Haram suicide bomber tried to force himself into the troops’ firm base, but the gallant troops aborted this heinous intent by promptly neutralising him and his cohorts with effective fire in the general area.

“The Improvised Explosive Device (IEDs) strapped to his body got detonated in the process and his body parts were found scattered across the field”, it said.

Items recovered in the aftermath of the encounter include 81 mm mortar muzzle cover, two rounds of anti-aircraft ammunition, one AK 47 magazine and one passport photo.

Iliyasu said the Chief of Army Staff, Lt. General Tukur Buratai, extended his goodwill message to the troops and further admonished them to remain resolute in their efforts at clearing and destroying all the hideouts and enclaves of the remnants of the insurgents in the North-east.

Oladele advised motorists to cooperate with the FRSC and sister security agencies that would enforce the temporary closure of the Bridge till it is repaired and reopen to motorists for use.