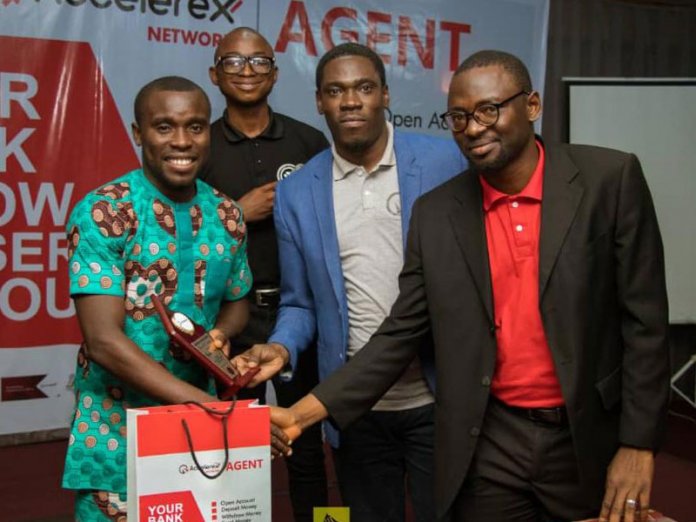 As part of its efforts to deepen financial inclusion and galvanize its relationship with agents and aggregators, Accelerex Network limited has awarded some of its best performing partners.

Speaking at the ceremony held in Lagos recently, The Head of operations, Accelerex Network limited, Lanre Amoo, stated the importance of the agents and aggregators.

“We grew because our agents and aggregators grew, they have been a backbone of our business, the model we are operating on is just like the gospel, you accept the gospel and preach the gospel to others to join you.

“This is the first Accelerex agents award and we are here to celebrate all our agents because they are so special to us.”

He also also advised the agents to look beyond the challenges of the Nigerian economy and towards the opportunities within.

“The economic situation is not that good to explore greatness in layman’s view, but foreigners are investing in our economy daily, the only thing we need is just to open our eyes and grab the opportunity around us.”

According to the Managing Director, Accelerex Network limited, Samuel Oladimeji, ‘the company has recorded tremendous success within a year.’

Samuel added that, Accelerex Network has extended financial inclusion services across the nation to assist the government to alleviate some of the pangs of unemployment by gainfully employing over 4000 people on their Agent Network Platform (ANP), a product owned by its sister company, Global Accelerex.

He also noted that: “Economic situation presently is tough and especially young entrepreneurs that are just coming into the market, we believe that the higher the challenge, the higher the value, but in our little way we still deliver quality services to the society, agents, aggregators and banks.”

In his remarks, a comedian, Afamefuna Klint, popularly know as Klint Da Drunk, said “We have been working together from the scratch, one thing that really triggered me about Accelerex is the one on one relationship between the costumers and Accelerex even the end users.”

The Head of Growth, Accelerex Network, Pius Okwuanya, stated that the event was mainly held to bring to the fore, the deepest values of Accelerex Network Limited and that is the total focus on the agents and ensuring that the relationship goes beyond transactional level to that of shared value, mutual respect and growth.