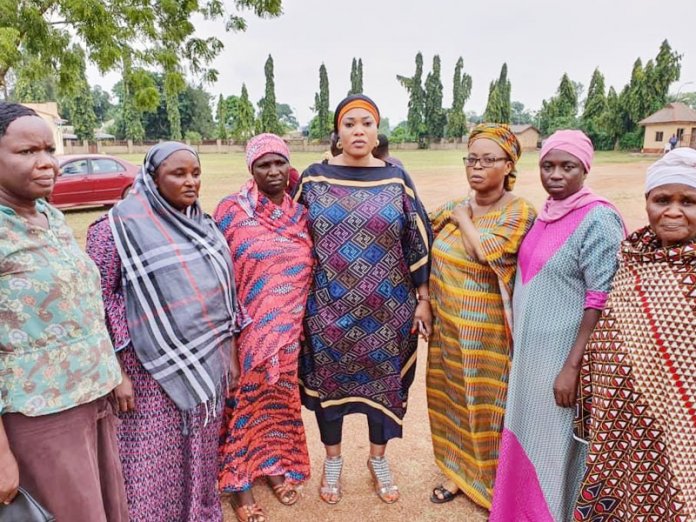 A United States-based journalist, MagnaFaith Krimi, has donated sewing and grinding machines to the victims of the crisis that rocked communities in Kajuru Local Government Area of Kaduna . In February 2019, communities in Kajuru were engulfed in crisis which led to mass killings and destruction of property.

The crisis which lasted for months, rendered hundreds of people homeless and their means of livelihood destroyed. Many of the victims are yet to recover from the devastating effects of the attacks. Presenting the items in Kajuru, Krimi said she was touched by the terrible condition the victims when she visited the IDP camps during the crisis. She said she decided mobilise her meagre resources to assist the victims to carry on with life. Krimi who made the donations through the Kaduna state Chairman of the Christian Association of Nigeria (CAN), Rev. John Joseph Hayab and Sheikh Haliru Maraya, said, she was devastated with the horrible conditions of the victims of the attacks during her visit to the IDP camps.

In a message presented on her behave by Hayab, she said: “As human, one is naturally moved with the condition these victims found themselves, some cannot moved from where they are, neither can they help themselves by way of catering for themselves, and worst still, majority are widows with nobody to give them a helping hand with the children under their care. When l saw some of them during my first visit to the IDP camps, l could not hold my tears but had to weep for them looking at the condition they found themselves. What l am doing today is a way of sharing with them what they are going through and in my little way to offer the little l can to cushion their pains and give hope out of a life of hopelessness. It is my earnest desire that the little l am giving them will go a long way to effect a positive beginning in their efforts to start new lives and also help their children to live meaningful lives in the future.”