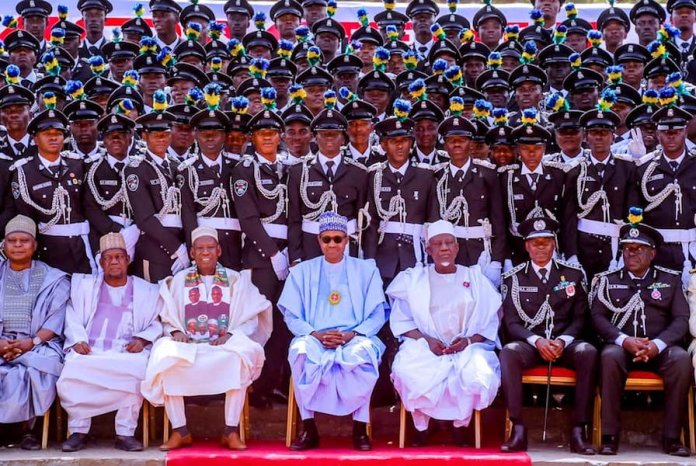 President Muhammadu Buhari has commissioned 628 cadets that graduated from the Police Academy Wudil, in Kano State to Officers of the Nigerian Police.

In his speech during the passing out parade on Thursday, Buhari reiterated his administration’s commitment in fulfilling his campaign promises, especially on security, fight against corruption and improving the economy of the country.

The president said the Nigerian Police remained a critical area in the country’s domestic security, hence much emphasis was accorded to the sector.

He said: “the Nigerian Police Academy Wudil was meant to produce police officers that would foster the security of the Nation. Therefore, I implore you to operate professionally, gallantly and courageously.”

Congratulating the officers, Buhari urged them to always remember that Nigeria and the law abiding Nigerians have entrusted on them to protect their lives and property.

Earlier, the Commandant of the Academy, AIG Ibrahim Zanna, said the 628 cadets of the Regular course two, out of which 83 are females have successfully graduated as Assistant Superintendents of Police (ASPs).

Zanna said that in order to offer courses that have more relevance with the challenges of policing the nation, the Academy would soon introduce courses bordering cyber crime, gender issues, criminal justice and administration.

He charged the new officers to be dedicated and selfless in serving the nation.

“Although, the growth and development of the academy has been accompanied with the infrastructural inadequacies of classrooms, hostels, staff houses and lecture theatres, which the academy is still trying to deal with, it is hoped that the government would continue to provide requisite assistance in this regard to enable the academy achieve its set objectives,” he said.

According to him, despite the mentioned challenges, the academy has endeavoured to provide an environment conducive for learning and research into high-level policing and general services to the public.

He explained that more needed to be done to equip the academy with requisites facilities to cope with modern law enforcement strategies.

The Commandant called for the support of the President in signing the police academy bill currently before the National Assembly in order for the academy to fulfill the objectives of its establishment. (NAN)