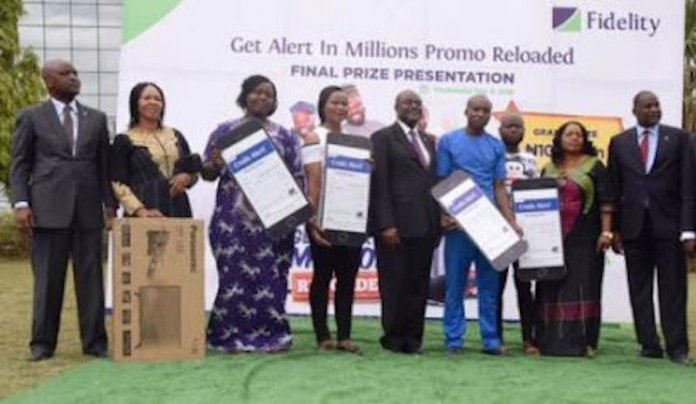 Ndubuisi Francis in Abuja
Fidelity Bank Plc has declared its resolve to continue to support the national financial inclusion strategy with a view to reduce the percentage of financially excluded Nigerians.

The bank said a situation where over 50 million Nigerians are excluded from the financial system, which represents more than 45 per cent of the population, creates major impediments to the nation’s growth trajectory.

The Managing Director/CEO Fidelity Bank Plc, Mr. Nnamdi Okonkwo made the assertions in Abuja, weekend when the bank presented prizes to winners of its ‘Get Alert in Millions (GAIM) savings promo.
The lucky winners of GAIM emerged from the second monthly/ first bi-monthly draw (Season 4) of the promo, which held at the bank’s Regional Office in Abuja.

There were three categories of winners among the customers— N3 million, N2 million and N1 million, in addition to 18 consolation prizes of television sets, generators and refrigerators.

In his remarks on the occasion, Okonkwo who was represented by the Regional Bank Head Northwest 1, Manir Ringim, said lucky customers of the bank would cart away N120 million at the end of the promo in April 2020, pointing out that N15 million was won during the first draw in Ibadan and N19 million in Abuja bringing the total to N34 million after the second draw.

According to him, the promo which started in October 2019 was part of the bank’s efforts at deepening the financial Inclusion strategy of the government and ensure more people are financially included.

“As we speak, over 50 million Nigerians are financially excluded, which represents about 45 per cent of our population and we in Fidelity Bank want to break this gap and also encourage more people to embrace savings culture,” he said.

On how people can qualify for the draw, the bank’s Group Head, Savings and Retail Sales, Mrs. Janet Nnabuko, said both existing and new customers can win by simply topping their account with N10,000 for existing customers or someone opening a new account and building it up to N20,000.

When contacted by phone, one of the lucky winners, Chika Perpetua Maduike from the Abuja regional office,who won N2 million was doubtful but finally made it to the venue of the draw to face the fact that her win was real.