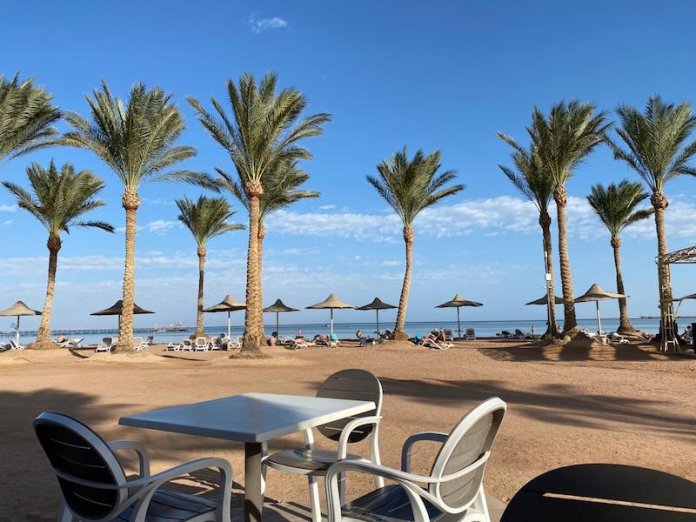 Some destinations have the sea, others the desert, and some like Sharm el Sheikh have both. Demola Ojo was at Egypt’s famous Red Sea resort city…

The one-hour flight from Cairo to Sharm el Sheikh arrives just before midnight but the commute to the hotel from the airport awakens the senses as thoughts of sleep quickly evaporated.

The nightlife in Sharm El Sheikh is modern and developed with excellent security, ensuring that both leisure and commerce continue into the wee hours of the morning.

While you expect bars, restaurants and nightclubs to stay open late, it is a pleasant surprise to find souvenir, handicraft, essential oil stores and many more open round the clock. They sell at cheaper prices than in Cairo too.

The routine in Sharm is beach by day, party at night, repeat. Sharm’s geographical location is a big factor that drives this lifestyle. It is on Egypt’s eastern coastline along the Red Sea, part of a stretch named the Red Sea Riviera.

The city is on the southern tip of the Sinai Peninsula and is the administrative hub of Egypt’s South Sinai Governorate, which includes the mountainous interior of St. Catherine and Mount Sinai.

Sinai is the land bridge between Africa and Asia and Mount Sinai – also known as Mount Moses – is one of the most religiously significant places for Abrahamic faiths.

Sharm’s major industry is tourism, owing to its dramatic landscape, year-round dry climate with long hot summers and warm winters as well as long stretches of beautiful beaches and abundant natural and archaeological points of interest.

October to March is the best time to visit, with typical temperatures between 18 to 23 °C in January.

Environmental zoning laws currently limit the height of buildings in Sharm to avoid obscuring the natural beauty of the surroundings.

Sharm is the leading choice for many Europeans in the winter months, especially Italians and Russians. There are loads of Italian restaurants and clubs in addition to the numerous international hotels and resorts.

The tourist economy of this Sinai Peninsula city has grown quite rapidly over the last few decades, resulting in first-class resorts and posh nightlife.

A large number of staff working at the Aurora Oriental hotel – where a group of tour operators from Nigeria and I stayed – were from Italy or Russia. They wore slightly different uniforms to be identified as one or the other.

The Aurora is just one of the dozens of resorts in Sharm. They offer well-manicured lawns, swimming pools, spas, sun, sea, sand, palm trees, water sports and in some cases, golf course.

The Aurora is expansive with two massive outdoor pools along a walkway that snakes through beautiful greenery and leads to a pristine private beach and the crystal clear waters of the Red Sea.

Just like most resorts in Sharm, the Aurora is an all-inclusive resort. This is especially convenient for customers who save up for a vacation and pay for tours that cover everything: flights, lodging, three meals daily, snacks in-between meals and soft drinks.

Depending on the package (and the tag you wear during your stay), alcoholic drinks, non-motorized water sports and other activities are included in the price as well.

It only took a minute or two at the beach before an Egyptian staff of ‘Sea World’ came across to the table where three of us sat. We didn’t want to be distracted, so we told him to drop the flyer and we’ll reach him. We weren’t so sure why he was insistent on explaining to us until later; it was in Italian!

The waters of the Red Sea at Sharm are clear and calm for most of the year and have become popular for various water sports, particularly recreational scuba diving and snorkelling.

Diverse marine life and hundreds of Red Sea coral reef sites make Sharm El Sheikh a magnet for divers from around the world. It provides some of the most stunning underwater scenery and warm water, making this an ideal place to dive.

The temperature of the Red Sea in the region ranges from 21 to 28 °C over the course of the year, which is music to the ears.

Other popular activities include windsurfing, kitesurfing, para-sailing, boating, and canoeing. There is great scope for scientific tourism with diversity in marine life.

On the day the tour operators in the group went out on a facility inspection, I stayed back to write. In need of inspiration, I set out for the beach. This time, it didn’t take much convincing for me to hire a speedboat and set out to one of the coral reefs 10 minutes away.

The boat trip itself is an experience to be savoured, with the hills of Sinai forming a stunning backdrop. It is especially jaw-dropping at sunset.

Swimming with colourful fish at the coral reefs is an activity families will enjoy with shallow spots to wade in water.

For a mind-blowing experience though, a trip to Tiran Island – another 10 to 15 minutes away – is recommended. Here, dolphins are frequently sighted and lucky tourists have had the opportunity to spend some time in water with them while snorkelling or diving. It is another reason Sharm is regarded as one of the best diving destinations in the world.

Our group went on a quad bike adventure that started just past sunset, around 5pm in Sharm at this time of the year. It was a surprise and we got there too late to take sunset pictures but twilight is scenic still.

About 15 bikes kicking up dust headed into the hills at dusk. After about 30 minutes of off-road riding, we made a stop to shout “LA-GOS” just to hear the mountain echo it.

The next stop was dinner with Bedouins after being treated to entertainment, including belly dancing. Two hours later, we were headed back to the hotel covered in dust but reliving an exhilarating experience.