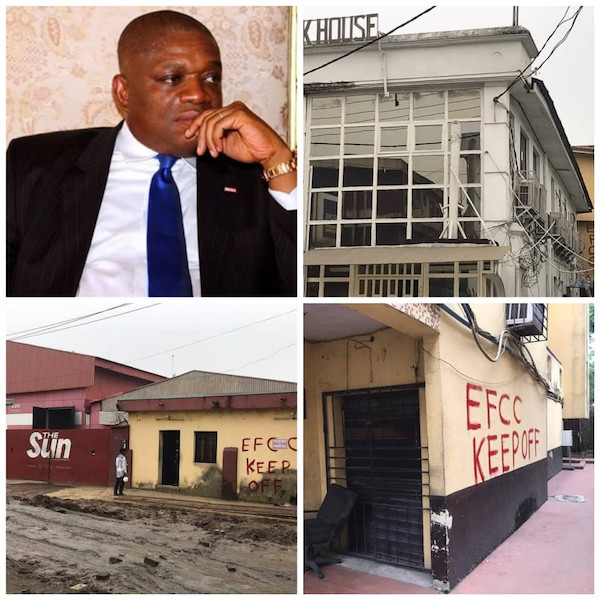 The Economic and Financial Crimes Commission (EFCC), yesterday, marked properties belonging to a former governor of Abia State, Orji Uzor Kalu, including The Sun Newspaper, which it partially sealed off, serving notice to the management of impending and complete sealing of the premises.

A statement by the commission’s Head of Media and Publicity, Mr. Wilson Uwujaren, stated that the marking was to ensure that “the properties were not dissipated, following the December 5, 2019 order of Justice Muhammed Idris sitting at the Federal High Court in Ikoyi, Lagos that Kalu’s company, Slok Nigeria Limited, be wound up and all assets forfeited to the Federal Government.”
But the management of Sun Newspapers, owned by Kalu, has kicked against the action by EFCC, saying there was no legal basis for what it did.

Sun, in a statement, said three EFCC officials, with four heavily armed policemen came to its office located on 2, Coscharis Street, Kirikiri Industrial Layout, Apapa, Lagos on Saturday, December 14, 2019 at about 10.00am and put up a notice for staff and the general public to keep off the premises.

“The EFCC officials, who came in a white Toyota bus with registration number, ABUJA BWR-644GA, wrote on The Sun’s fence, ‘EFCC, keep off.’ They also advised our staff to collect their personal belongings from the office as they will come back to seal the premises completely.”

Arguing that it did not understand the legal basis for the EFCC action, the Sun Management said, “It is on record that there is a pending appeal at the Supreme Court with Suit No: SC/546/2018 wherein The Sun Publishing Limited appealed against the judgment delivered by the Court of Appeal on the interim forfeiture order made against it by a Federal High Court in 2007 based on ex-parte proceeding.

“The Notice of Appeal and Motion for Stay of Execution were duly served on EFCC by the bailiffs of the Court,” it explained.
The Sun also stated that EFCC, vide a letter written by its counsel, dated May 22, 2018 and duly received by one Caleb Peter on behalf of Rotimi Jacobs & Co. was further put on notice of the pending appeal at the Supreme Court and advised to stay action in the matter pending the hearing of the motion for stay of execution and the appeal.

The newspaper also reminded the EFCC that both Kalu and Slok Nig Limited had since appealed the judgment delivered by Justice Idris and that a hearing date had been given.
“We wish to reiterate that The Sun Publishing Limited is an ongoing corporate limited liability company and its shares are owned by various individuals distinct from Senator Orji Uzor Kalu.

“Therefore, the recent judgment against Senator Orji Uzor Kalu should not be used to disturb the operations of the company and the proprietary rights of its innocent shareholders until the matters are dispensed with at the Supreme Court.
“In view of the foregoing, we call and appeal to the Attorney General of the Federation and the Minister of Justice to urgently intervene and advise EFCC appropriately on the legal consequences of its actions.”

Kalu, who is the Senator representing Abia North in the National Assembly, was arraigned alongside his company, Slok Nigeria Limited and Udeh Udeogu, Director of Finance and Accounts at the Abia State Government House, over an amended 39-count charge bordering on conspiring and diverting the sum of N7.65bn from the coffers of the state.

The defendants however pleaded not guilty to the charge preferred against them by the EFCC, leading to their full trial.
In the course of the trial, the prosecution counsel, Rotimi Jacobs, SAN, called 19 witnesses and tendered several documents that were admitted in evidence by the court. But the defendants testified on behalf of themselves during the trial.
The parties, during the proceedings on Tuesday, October 22, 2019, adopted their final written addresses.

Jacobs also urged the court to wind up the company as provided by the Law and all its assets forfeited to the federal government.
However, the defence counsel urged the court to “dismiss the charges, acquit and discharge” their clients.
Delivering his judgment, Justice Idris found the defendants guilty on all counts and held that the prosecution had established its case against the defendants.

Justice Idris further held that, “In respect of the third convict, Slok Nigeria Limited, an order is hereby made that the company shall hereupon and without further assurances, but for this order, be wound up and all its assets and properties forfeited to the Federal Government of Nigeria.”