•UN outraged by ISWAP’s action, as INGOs want others in captivity freed

President Muhammadu Buhari has said despite the seeming reign of terror by the Islamic State West Africa Province (ISWAP) in the Northeast part of the country, his administration has resolved to beat evil to its game, no matter how long it takes.

The president, who spoke against the backdrop of Friday’s killing of four staffers of a French Non Governmental Organisation, Action Against Hunger, by ISWAP’s splinter group, however, condemned the action of the terrorist group and advised it to lay down its arms in exchange for a better life.

Similarly, the United Nations also outraged by the development has described the killing as a sad day for the people and government of Nigeria, particularly the humanitarian community supporting the aid works.

On its part, however, the International Non Governmental Organisation has appealed to all relevant authorities to ensure that every humanitarian worker held captive in Northeast was released as soon as possible.
The aid workers were abducted by the group near Damasak, Borno State, in July, and had been held captive, despite efforts to secure their release, till their reported execution.

The four men were among the six aid workers that were abducted on July 18, when their convoy came under attack near Damasak, in Mobbar Local Government Area of Borno State.
They were working on a health project implemented by Action Against Hunger. One of the drivers was killed during the attack and another was reportedly executed on September 24.

Buhari, in a statement yesterday by his Special Adviser on Media and Publicity, Femi Adesina, flayed ISWAP for executing the four male aide workers and committing the female colleague amongst them to life slavery.

While maintaining that the defeat of evil by good was inevitable, the president called the seeming triumph by the terrorist group a pyrrhic victory, even as he commiserated with the family and loved ones of the aid workers, whom he said offered themselves to serve humanity at grave risks.

According to the statement by the president, “Evil will always be defeated by good at the end of the day,” adding that, “whatever seeming victory evil records eventually rebounds on the evildoer. We are resolved to beat evil in this land, and we remain unrelenting till we achieve it.”

He however restated his advice to the insurgents to lay down their arms and re-join decent humanity.
Also, condemning the development, the UN in a statement by its Humanitarian Coordinator in Nigeria, Mr. Edward Kallon, condemned the announced execution of the aid workers by armed groups in Borno State on December 13.

“I am deeply saddened and outraged by the news of the tragic killing of four aid workers, who were held captive by armed groups for almost five months. My thoughts go to their families, friends and colleagues, who are enduring unspeakable pain and hardship.
“I plead for the immediate release of Grace Taku, the only woman, who was in the ACF team, and whose whereabouts remain unknown. I also call for the immediate release of Alice Loksha, a nurse and a mother, who was abducted during an attack in Rann in March 2018.”

The UN humanitarian coordinator however said, “This is another sad day for the people of Nigeria and the humanitarian community supporting them. These colleagues were devoting their lives to helping the most vulnerable communities in Borno State. Despite the risks, they were driven by the values of solidarity and humanity.”

He explained that the UN and its NGO partners in Nigeria were working to bring vital assistance to over seven million people in the crisis-affected states of Borno, Adamawa and Yobe, regretting that they had increasingly remained the target of violent attacks.

Seven aid workers had been killed since the beginning of this year, and they were among the 26 UN and NGO workers that had lost their lives in the conflict since 2011.
“Violence against humanitarian actors jeopardises access to much needed assistance for people affected by the armed conflict,” Kallon lamented.

He renewed the call for all armed actors to respect the principles of humanity, neutrality, independence and impartiality, which guide humanitarian assistance, and ensure the protection of aid workers.
The Paris-based aid group, Action Against Hunger, had in a statement on Friday said one of its staff and two drivers were among those killed.

“The armed group responsible for the kidnapping of humanitarian workers on July 18, have murdered four hostages,” the group said in a statement that did not identify the victims.

Another of the hostages was killed in September.
The aid workers and three Ministry of Health personnel were kidnapped while delivering humanitarian aid to vulnerable people near the town of Damasak in the restive Northeast zone.

Meanwhile, the international NGO community has asked all relevant authorities to ensure that every humanitarian worker held captive in Northeast Nigeria were released.

A statement by the Nigerian wing of the International Non Governmental Organisations (INGO), said they stood in solidarity with their colleagues of Action Against Hunger (AAH-ACF).
“We are deeply saddened and condemn the recent killing of four humanitarian workers, previously abducted along the Maiduguri-Damasak road on 18 July 2019.

“We are calling on all relevant stakeholders to ensure that Grace Taku, the last AAH-ACF staff remaining in captivity and all other humanitarians currently held are immediately released.
“Over ten years of conflict has deeply affected the population in North-east Nigeria. Today, more than seven million people are in urgent need of humanitarian assistance in Borno, Adamawa and Yobe states.

“At least 20 aid workers have been killed in North-east Nigeria since the beginning of the large-scale humanitarian response in 2016. Attacks against humanitarian aid workers cut off the population from much needed life-saving services.

“All parties to the armed conflict must respect their safe and unhindered access to all the people in need of assistance. Aid workers are not targets.
“Our thoughts and condolences are with their families, friends and colleagues,” the statement stated.

Okogie: Nigeria Back to Military Era

A former Catholic Archbishop of Lagos, Cardinal Anthony Okogie has said Nigeria is back to the era of military dictatorship.

In a statement on Friday, Okogie said Nigeria’s leaders were distant from the citizens, and that the country needed leaders who listen to the cries of the people and who would not be afraid of dissenting opinions.

He also condemned the frequent disobedience of court by the current administration, and said leaders must be reminded that “they cannot enforce laws if they cannot obey the law”.

“If the executive disobeys court rulings, and if it intimidates and humiliates the judiciary, then we are back to the era when a military junta made laws and interpreted them without any regard for fundamental human rights,” the cardinal said.

He said for democracy to work, those elected to represent the people must have a listening ear, and must not usurp the powers to accuse and convict at the same time.

“They do not arrogate to themselves the power to accuse, arrest, prosecute and convict. But can we candidly say we have democrats at the helm of affairs in this country at this point in time?

“How can we claim to live in a democracy when presidential spokespersons tell us the presidency is always right?”
Okogie also decried the worsening insecurity in the country, and said Nigeria has returned to a “sinful past” when citizens could be abducted and locked up in detention without trial “under the pretext of acting in the interest of national security”. 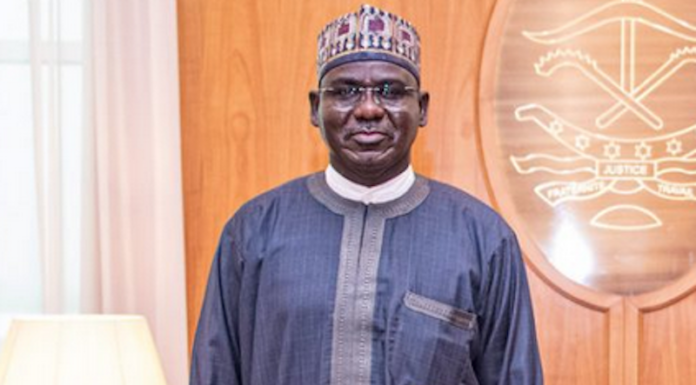