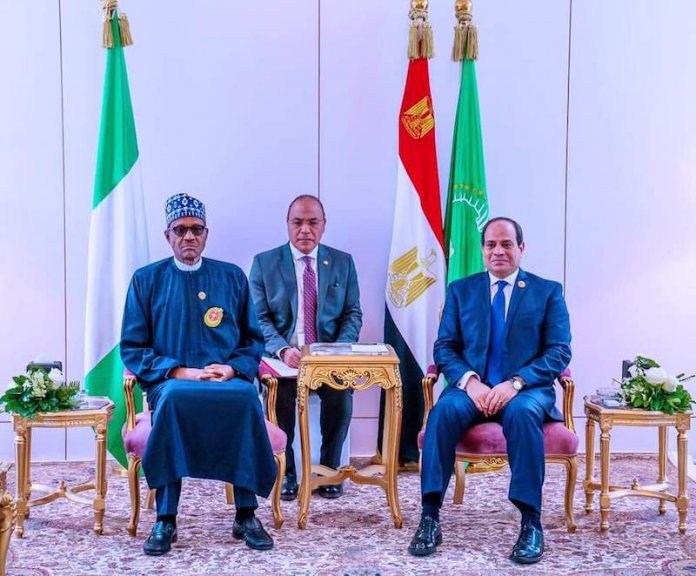 Nigrieria and Egypt have pledged to collaborate to eradicate the menace of terrorism in parts of Africa.

The understanding was reached between President Muhammadu Buhari and his Egyptian counterpart Abdelfattah el-Sisi on the sidelines of the Aswan Forum on Sustainable Peace and Development in Africa taking place in Egypt.

A statement signed on Thursday by the Special Adviser to the President on Media and Publicity,
Femi Adesina, confirmed the mutual agreement between both leaders.

During an audience el-Sisi, President Buhari said that countries of the West African sub-region were already in close collaboration towards combatting terrorism by setting up a multinational task force.

He noted that since terrorism is a worldwide phenomenon, more collaborative efforts should be employed in combating the menace.

“Together with other West African leaders, we are working hard to ensure that terrorism is eradicated. It is also important that the conflicts in North of Africa particularly in Libya do not frustrate our efforts. We seek your cooperation in this regard,” Buhari said.

President el-Sisi conveyed his appreciation to his Nigerian counterpart for honouring his invitation to participate in the gathering and for his contributions.

Similarly, he praised Buhari for his leadership qualities and pledged to deepen cooperation and partnership with Nigeria in all areas of common interest.

While briefing President Buhari on efforts of his government on counter terrorism, particularly on the Sinai and the borders with Libya, el-Sisi reiterated his willingness to synergize with the Nigerian government on all fronts to conquer the “evil of terrorism.

He also invited President Buhari to the opening of the new Egyptian capital and the Grand International Museum in October, 2020.