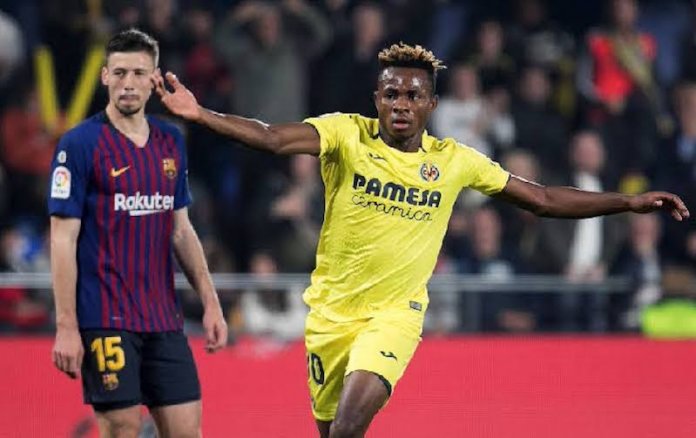 Femi Solaja with agency report
With the dusts raised after the last Ballon D’Or awards yet to finally settled down, Super Eagles forward, Samuel Chukwueze has thanked the winner of the prized award and FC Barcelona captain, Lionel Messi, of for voting him among his top three U21 players in the world.

The AFCON 2019 bronze winner with Super Eagles at the Egypt soccer fiesta is still in cloud nine despite the fact that Dutch defender, Matthijs de Ligt of Juventus eventually won the category ahead of other final 10 nominees which excluded the Nigerian star.

The Argentina captain, Messi, had voted for the trio of Jaoa Felix, Jadon Sancho and Chukwueze as his top three players under the age of 21 with the Villarreal forward the only African player in Messi’s list for the award which was won by the defender who switched over from FC Ajax to Serie A last summer instead of much anticipated move to Barcelona.

Chukwueze who is also in the run for CAF Young Player of the year award in January in an interview with www.owngoal.com said getting recognised from a player of Messi’s status is a testimony to how his game has improved the past few months and he is motivated to do more.

” For one to get an endorsement from a player of Messi’s status says a lot. I found it hard to believe when I was told because I never believed he will pick me in his top three players.

” The vote is a motivation for me to work hard and continue to improve on certain areas of my game.

” I am still learning in several areas of my game and hopefully I will improve and become a better player in the nearest future. Maybe to the level of Lionel Messi because there’s nothing prayers laced with hardwork can’t do. I learnt that from my mother,” said the Villarreal forward who has scored two goal for the Yelow Submarines this season and 12 goals in 57 appearance for the Laliga side since he joined the club two seasons ago.