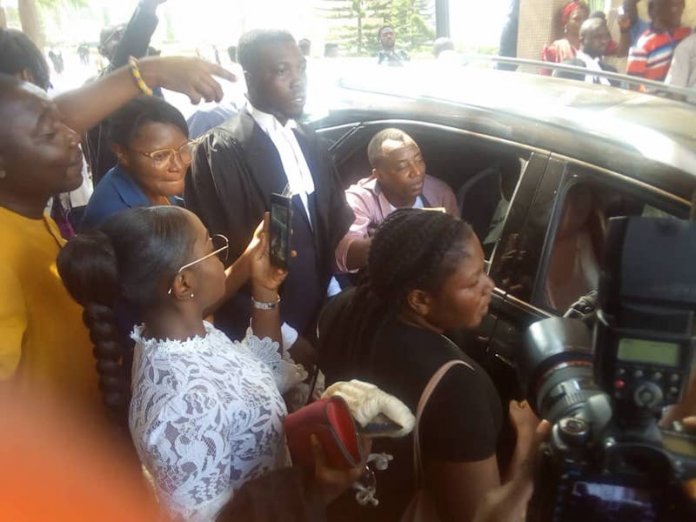 There is commotion at the Federal High Court Abuja, Friday morning as operatives of the Department of State Service (DSS) besieged Justice Ijeoma Ojukwu’s Court in an attempt to rearrest Sowore who was only released Thursday after four months in DSS custody.

Justice Ojukwu had Thursday ordered the security operatives to release Sowore who was being held in their custody within 24 hours.

Sowore had last month perfected his bail conditions but was not allowed to enjoy bail by the DSS forcing the judge to make a fresh order of 24 hours on the security services.

However Sowore who had appeared with his lawyer in court this morning in line with the Court’s for report of compliance, was chased back into the courtroom by operatives of the DSS who were waiting outside the court premises.

Following the report of compliance, justice Ojukwu had adjourned to February 11, 2020 for commencement of trial.

But as Sowore and his lawyers were coming out of court some stern looking operatives of the DSS swooped on him, in a bid to forcefully take him away.

Sowore despite being dragged managed to get back into the court with the operatives following behind thereby disrupting proceedings.

But lawyers and journalists were locked out of the court as operatives threatened to seize and destroy phones and cameras of journalists.

As at the time of this report Sowore is still inside the court room.