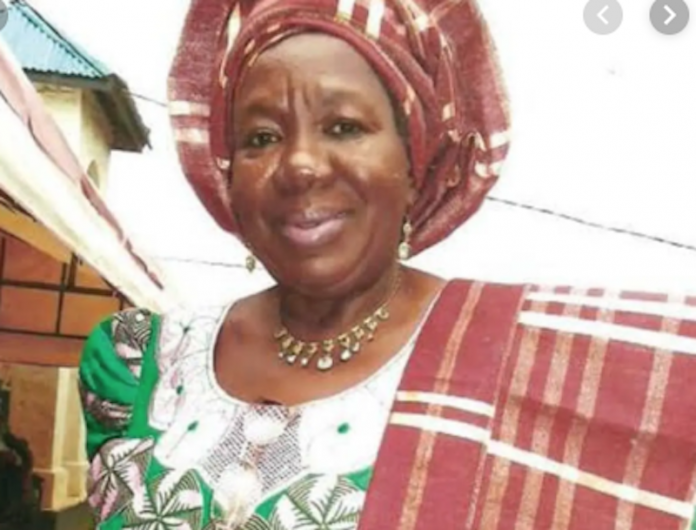 She reportedly died on Thursday after a brief illness.

Ajanaka, a former chairman of Abeokuta Local Government in Ogun State, was the first female local council chairman in Nigeria.

Her deah was confirmed by her son, in a telephone chat with former President Olusegun Obasanjo on Thursday.

Reacting to her passage, former President Obasanjo under whom she served said her loyalty and commitment to women affairs development was exemplary and worthy of emulation.

Obasanjo also recalled how the late Nursing professional joined other Nigerians to visit him in 1998 to persuade him to contest for President.

Obasanjo described her as a woman who would do everything in her capacity to uplift, improve and advance the cause of women, saying, this largely formed reasons for her appointment as his Women Adviser, the position she served in creditably well.

In a release by Special Assistant Media to the former President, Kehinde Akinyemi, Obasanjo further described Ajanaku, as a woman of great substance in her own right.

The former President who wrote a personal condolence letter to the Head of the Ajanaku family stated that Ajanaku played a prominent role in his decision to contest for the post of President in 1998.

“I remember vividly one of my memorable encounters with Chief (Mrs.) Titi Ajanaku, when she accompanied a group of politicians led by Chief S. M. Afolabi of blessed memory to my Abeokuta residence to persuade me to contest as President of Nigeria.

“It was partly their persuasion and that of other groups alike that later yielded my final submission to contest for the office of the President of Nigeria.

“In her lifetime, Chief (Mrs.) Ajanaku had a genuine desire to contribute her quota to building a better society through advocacy for fundamental human rights and service to humanity. She was an activist dedicated to the cause of protecting the rights of women within the context of culture, policy and law.

“An advocate of gender balance, she remained mindful of those fundamental responsibilities of women which remain critical to family life and family stability.

“All of these culminated in my appointing her as my Special Adviser on Women Affairs during my administration as the President of the Federal Republic of Nigeria and she creditably acquitted herself in every assignment given to her.

“Indeed, shortly after her appointment, it was easy to recognize her notable qualities of work ethic and commitment to public service. She bore the responsibility of proving her mettle with the consciousness that her success would create opportunities for other women.

“As an exemplary patriot, her rare courage and contributions laid a solid foundation for Ogun State and for Nigerian women to take their rightful position in our nations polity. To women, she occupied a special place as a mother, role model and source of inspiration, a redoubtable champion and defender of womens rights.”

Obasanjo added: “We, therefore, join you in thanking God for such a life spent in touching so many other lives positively. Her memory will remain evergreen in Ogun State, Nigeria as a whole and beyond for performing her duties with integrity and quite efficiency as well as with generous disposition, magnanimity and unstinted love for the people.

Abiodun described the late Otun Iyalode of Egbaland as a foremost political activist and woman leader, an astute administrator who served the State meritoriously as the Chairman of the old Abeokuta Local Government Area and the nation at large at the Federal Executive Council.

“I received the news of the demise of this great woman with shock and unbelieve.
Mama Ajanaku was a woman of many parts. A trained Nurse, an activist fighting the course of women, a politician of high esteem and a great philanthropist.

“Mama Ajanaku as her name implies in Yorubaland, treaded where even men feared to tread. In politics of Ogun State and even Nigeria, she was a colossus, being the first woman in Nigeria to be elected a local government chairman and a founding member of the People’s Democratic Party.

“We will miss her particularly now that all hands are needed to build our future together. Though she is no more, we are happy that she lived an impactful life, a life of service to God and humanity”, Abiodun said.

The governor noted that the death of the former Special Adviser to President Olusegun Obasanjo on Women Affairs, had created a vacuum which would be difficult to fill, adding that the State and his administration in particular, would miss her services, wise counsel and advice.

While praying God to give the soul of the late Otun Iyalode of Egbaland eternal rest and the family the fortitude to bear the irreplaceable loss, Prince Abiodun urged them to imbibe her exemplary life of service to God and humanity.