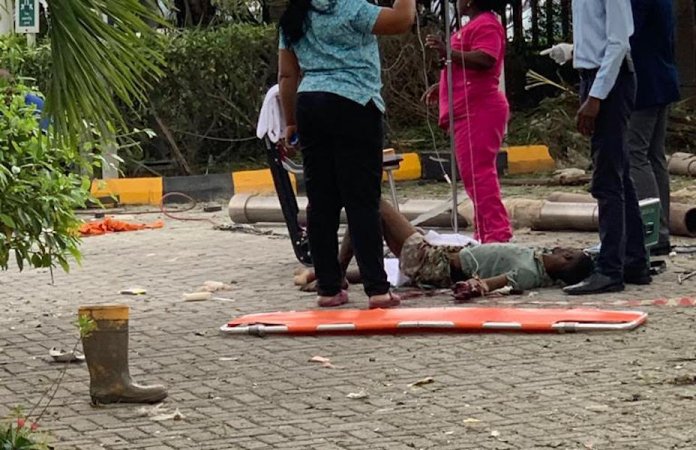 Three people on Wednesday sustained severe injuries while several cars were damaged as a result of a gas explosion within the premises of Four Point by Sheraton Hotel, Victoria Island, Lagos.

The explosion caused pandemonium as initial fears were that an explosive device had gone off in the premises of the hotel.

In between calming down lodged guests and visitors  the hotel staff also helped emergency responders in securing the perimeter given that the explosion also damaged several cars.

When normalcy returned, it was however discovered that it was the gas cylinder used by welders working in the hotel premises that exploded due to leakage in one of the gas cylinder’s hoses.

The impact of the explosion shattered some of the windows in the building, damaged cars, as well as injured people, some of who were rushed to the hospital immediately.

Confirming  the incident, officials of the Lagos State Emergency Management Agency (LASEMA), who responded to the crisis, said three persons were injured in the incident.

LASEMA Director General, Dr Femi Oke-Osayintolu, who reiterated that the cause of the explosion came from the gas cylinder belonging to the welders, said normalcy had been restored.

He said: “On getting to the scene of the incident, a gas cylinder was said to have exploded within the vicinity of the hotel.

“ Further investigation revealed that the gas cylinder used by welders working in the yard of the hotel premises exploded due to a leakage of one of the gas cylinder’s hoses.

“A total of three people sustained severe injuries as a result of the blast and two have been rushed to the Lagos Island General Hospital for intensive care by LASEMA Ambulance Unit.

“The other one was rushed to a nearby private hospital. Also, several cars and hotel room windows were shattered as a result of the blast.”