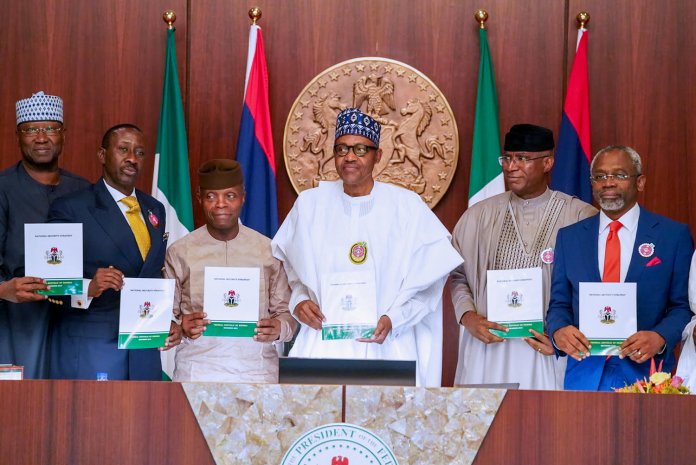 President Muhammadu Buhari has launched the National Security Strategy 2019. The security roadmap was launched at the State House, Abuja on Wednesday, a day after the President unveiled the first Made-in-Nigeria Mine Resistant Ambush Protected (MRAP) vehicles by the military at the opening ceremony of the 2019 Chief of Army Staff Annual Conference in Kaduna.

Buhari expressed happiness that the National Security Strategy 2019 is a product of painstaking and rigorous deliberations by relevant stakeholders committed to the task of safeguarding the nation from internal and external threats.

He noted that the plethora of security challenges confronting the nation has made it expedient to come up with articulated, comprehensive and coordinated response that involves all segments of the society and all elements of the national power.

The president said the strategy represents a thoughtful, strategic and practical expression of the resolve to make Nigeria safe for development, investment, growth and prosperity for everybody.

“As we continue to work towards completely ending insurgency in the north-east and laying the foundation of sustainable peace and development in the region, we are also addressing conflicts between farmers and herders, banditry and various forms of security challenges. In addition to security, economic diversification and fighting corruptions, our administration priorities for the second term include pursuing improvements in education, healthcare and agriculture.

“These priorities reflect our commitment to enhancing the social security of Nigerians as a means of improving their physical security.

“I’m happy to observe that the National Security Strategy reflects this thinking with emphasis on overall human security. I’m pleased also to know that the strategy emerged after a long time consultative and participatory process that elicited contributions primarily from our security, intelligence, law enforcement agencies and the armed forces. Other stakeholders such as ministries, department and agencies and the civil society were also contributory to this strategy.

“As such, this strategy will inform government wide and society wide measures designed to promote the public safety and the national security,” Buhari said.

He described security as a bottom to top operation, saying failure at any level will lead to serious lapse in overall security.

He called on all stakeholders from heads of MDAs to see themselves as stakeholders and partners in the onerous task of securing “our people and to demonstrate unity of purpose in implementing this strategy.”

The President commended the National Security Adviser (NSA), Maj. Gen. Babagana Mongonu, and his team for delivering on the document.

He added that the urgent task before the country is how to execute the strategy and achieve a safer and more secured nation, saying it is a task to which his administration remains fully and unreservedly committed to.

On his part, the NSA described the national security strategy 2019 as a cornerstone document that enshrines the deep abiding commitment of President Buhari to ensuring that Nigeria is a secure, peaceful and prosperous nation.

He said the core philosophy of this strategy is human security, which is a shift from the state-centric orientation to a new paradigm where the safety and wellbeing of the individual citizens are the primary bases for all national security measures.

According to him, the review of the national security strategy that was first was published in 2014 was necessitated by evolving trends in the security environment that gave rise to new and more complex challenges.

The NSA noted that the document has addressed the current threats faced by the nation as well as those threats that are anticipated to emerge in the near future.

“We have also proffered appropriate strategy to address these threats which demand a whole of government approach in combination with a whole of nation to achieve a whole of societal approach in dealing with these challenges. This is critical because the perceptible trend in the national security landscape is that the traditional clear cut issues of internal and external security as it affects us today in the globalised world without borders are no longer the sole requirement for categorizing national security risk. Therefore, in the context of today, there is a vigorous interaction between internal and external threats thereby creating a complex constellation of threat and risk to all of us,” Mongunu said.

He noted that the farmers and pastoralists conflict is linked to the influx of armed groups and the proliferation of small arms and light weapons across porous borders from the volatile Sahel region and Libya, which has become politically fragile since the uprising that led to the death of Muammer Ghaddafi over a decade ago.

“In our own case, we are talking of some 4,040kilometers of land borders. Again, when you look at the upsurge in armed banditry, it is part of the sphere of transnational organized crime which is affecting us. And looking at the Niger delta situation, basically, the activities of criminal gangs in the Niger Delta are equally linked to pipeline vandalism, oil theft, piracy and sea robbery in the Gulf of Guinea. These have brought about untold problems and placed our maritime economy in derelict while at the same time, putting in a difficult situation our energy infrastructure. In all of these situations, traditional law enforcement agencies have used various approaches and these approaches are complemented by the robust responses of our armed forces, security, and intelligence agencies. Nonetheless, this National Security Strategy has decided to embark on a comprehensive and multi-dimensional approach to solving these challenges.

He said the national security strategy aimed to mitigate adverse national security indicators in its desire to achieve the delivery of positive governance outcome for all the people of Nigeria, adding the document took a comprehensive look at how to enhance the capacity of security agencies and how they need to collaborate with each other.

PDP Condemns Banning of AIT, Others from Presidential Villa