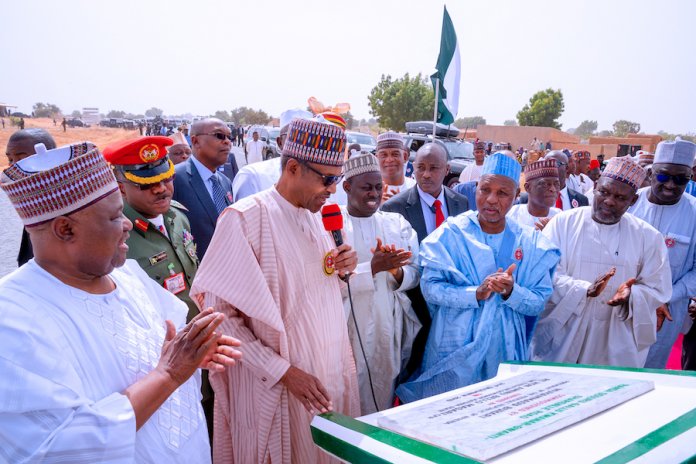 President Muhammadu Buhari yesterday in Sadanmu, Daura Emirate Council of Katsina State, inaugurated the construction of the N18 billion University of Transportation to be completed in the next one-and-a-half year.

Buhari, while performing the groundbreaking ceremony, said the newly-established institution would bring rapid development to the transport sector as well as generate both academic and non-academic employment opportunities for Nigerians.

He spoke just as the Minister of Transportation, Mr. Rotimi Amaechi, said he had no regret situating the university in Daura, the president’s hometown, as the town is in Nigeria and not in another country.
Buhari stated that the University of Transportation, which will be the first in Africa, will pave the way for the domestication of railway engineering and bridge the technology and skill gap in the railway and transportation sector.

According to him, “This university and Rolling Stock Assembly plant projects have demonstrated the commitment of Messrs. CCECC to having a long-term relationship with Nigeria and thus create more avenues for collaboration between the parties and will no doubt assist the enhancement of the bilateral relationship between China and Nigeria”.

The president added that the university would enable Nigeria to domesticate railway engineering and transportation.
He acknowledged the cooperation and understanding of all stakeholders in the implementation of federal government projects, especially state governments.

Buhari said his administration would continue to create job opportunities through the establishment of indigenous industries and would reposition the transport sector, especially the construction of rail lines, roads, and other transport-related utilities.

He noted that in line with the federal government’s Economic Recovery and Growth Plan (ERGP) and the Presidential Order No. 005, the university will assist to build the capacity of Nigerian professionals, technicians and human resources in the transportation sector and also to fast-track technology transfer and Nigerian content in contracts, science, engineering and technology.

“It is therefore my expectation that in no distant future, Nigeria as a result of the graduands from this university will effectively operate and maintain the numerous railway infrastructure and services which my government is vigorously developing across the country,” he stated.

According to Buhari, the project is expected to have multiplier effect on the economy and on Nigerians.
“In light of the clear advantages of this university, I wish to commend on behalf of the good people of Nigeria, Messrs China Civil Engineering Construction Company (CCECC) which is building this university as part of their corporate social responsibility.

“In addition to this, I wish to put on record and commend CCECC for the willingness to establish, also, the Rolling Stock Assembly plant in Kajola, Ogun State whose groundbreaking took place on November 9, 2019,” he added.
Earlier, Amaechi had defended the need to build the university and why Daura was picked as its site.

“We realised that education is key to the building and maintenance of of all these infrastructures. I engaged CCECC.
“I insisted on the University of Transportation. Today, we are here for the groundbreaking ceremony of the university.
“When we sited the factory at Kajola, there was no noise; nobody debated about it; nobody abused us for it. Nobody influenced me to site this university here.

“Anybody who accuses me of being a sycophant; let me admit it in advance that I am a sycophant. And if you know the president very well, you will know that sycophancy does not sit well with Mr. President.