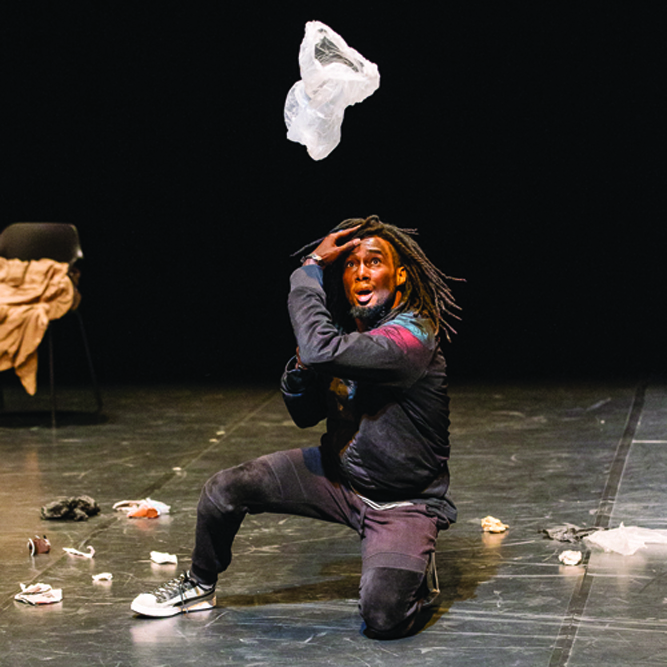 His lean form was draped in wraps of white polythene bags as he backed the audience who had come to watch his dance piece, titled “Pollution”, at the main stage inside the Freedom Park, Lagos. What a dramatic irony! The 28-year-old Abdoulaye Diallo had first performed this piece, considered as a work in progress, in 2017 in Germany during a festival where it subsequently won in a competition. Based on Diallo’s uncommon passion for a cleaner earth, the dance production is bereft of much spectacle but very rich in spoken words and music elements that interplay with the dancer’s well-choreographed movements.

Curiosity was aroused when Diallo donned a plastic dustbin on his head whilst standing on the chair. Following a series of body movements, he landed on the upstage centre with a thud, rising gradually with the music cadence. The audience seemed very still, watchful whilst a few debated the performer’s sexuality. The dancer in dreads would later rise, spin and splatter all the plastic waste on the stage without vocals. His energetic dance climaxed in a direct interaction with the audience, beckoning some of them to follow him back to the littered stage. He motioned to his followers to pick up the trash and put them in the dustbin while he did the same. The following applause was thunderous.

Covered in sweat, Diallo could finally catch his breath after the energy-sapping moves. He sat on a side of the stage after the show, replaying some of the pre-recorded message-laden spoken words by Afristyl.

Born in Senegal, Diallo had since observed that many African countries had poor refuse management systems. It is not unusual to find refuse in many leading African cities which indicates the plastic waste is indeed a big challenge. In a 2018 report published on the World Economic Forum website in collaboration with the ORB media titled , “7 Postcards from The Flooded World”, plastic waste account for the huge loss recorded in the fishing business in Makoko, area of Lagos.

Reflectively, Diallo explained why the rampant situation has remained unchecked. “Pollution is our problem but we don’t see it. We live with it every day. It’s our children who get to play around the trash and get sick. And when they get sick, it is the parents that will have problem.

“I think the people of Africa have to wake up to try and find solution to this pollution. From pollution management, we can create jobs. That is a problem that can be a solution. People need to clean the minds first to protect the environment,” the artist said whilst dabbing the sweat from his face.

Indeed, plastic waste is a recurrent feature in many communities in Lagos such as Ikoyi, Apapa, Ajegunle, Race Course, Agege, Ikeja amongst others. Diallo’s pollution is a crisp, creative and melodic composition advocating a cleaner earth with high notes on waste disposal and recycling.

Diallo has called the dance piece a life project which he hopes to continue through a series of workshops targeting school children. When asked if the performance would have been more impactful if it had a larger audience, Diallo argued that the impact is not necessarily measured by the volume of people reached at each performance venue.

“For me, it’s not about how many people have got to see it but that at least one person gets the message. That one person can make a difference in the lives of others,”  Diallo maintained. He cited the example of the international model, Naomi Campbell who visited Senegal and watched his performance of “Pollution”.

“She loved it and she invited me to come with her. We went to a big dumpsite in Dakar which has people living around it and we spoke with the woman who was managing it,” he recounted.

The dance project will be performed again in January 2020 in Switzerland and much later at Cape Town, South Africa in March. Diallo had performed this piece during the last edition of the Pan-African Creative Exchange initiated by the Vrystaat Arts Festival, Bloemfontein, South Africa.

The Lagos Fringe Festival is a PAW Studios production with support from British Council, Alliance Française and the Freedom Park.