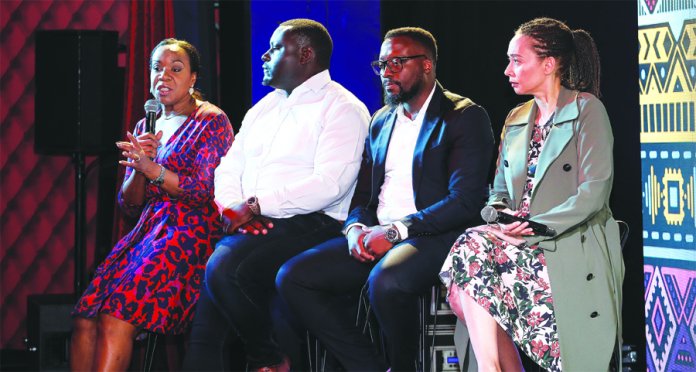 On 21 November, a raft of television executives, celebrities and journalists from across Africa gathered at famous Nelson Mandela Square in the South African city of Johannesburg for the annual MultiChoice Group Media Showcase. Themed ‘Africa’s Most Loved Storyteller’, this year’s edition had as highlight MultiChoice’s commitment to creating platforms for sharing Africa’s stories and investing in its as well as that of local talent to take the African video entertainment industry to world-class level. The day was split into four separate sessions. The first two formed part of a segment titled “How We’re Telling Africa’s Stories”. The discussions and presentations at both sessions featured numerous efforts and work done in promoting African content from filmmakers, directors and storytellers to the charitable work done across Africa via various programmes and sponsorships.

Africans, it was noted, love entertainment more than most, with daily consumption of video entertainment on the continent estimated to be about 50% higher than the global average.
With over three decades’ experience, MultiChoice is the leading producer of local content where it operates, a status Yolisa Phahle, MultiChoice CEO, General Entertainment, attributed to the corporate decision to place the accent on its production and acquisition. She explained that MultiChoice currently has 18 local language channels across Africa, the highest number in the continent’s video entertainment industry. A major part of the investment in local content is the MultiChoice Talent Factory, which was conceived to build the capacity of young people involved in film and television production.

“Local content is a key differentiator for us, and we intend to continue producing more of it for our various markets. Our latest set of half-year results showed a 12% increase year-on-year in the number of hours of local content production, and our local content library now exceeds 54, 000 hours. We will continue to shift a greater percentage of spend towards local content,” said Phahle.
Local content highlights in the last six months, she said, have included the launch of MultiChoice’s first international co-production, Trackers, which is based on the book by South African author, Deon Meyer. The final votes cast in the latest season of Big Brother NAIJA increased to a record 240 million, and the ratings for Survivor South Africa rose by 36% in relation to the previous season.
“Our investment in the development of local talent enables us to be a contributor to award-winning entertainment content that resonates with our 18.9 million subscribers across the continent,” Phahle explained.

Sequel to the production of Trackers, MultiChoice announced Rogue, a new collaboration with international producers, Mannequin Pictures, which is set to debut on Showmax next year. Rogue is a man-animal drama in which a team of ex-military fighters battle foreign terrorists and escaped lions to save a group of school girls.
“True to the spirit of genuine collaboration, this co-production combines the knowhow and talent of Hollywood with our local talent and crew, making it a perfect fit with our strategy of elevating our content production to an international level. It also creates job opportunities and improves the economics of filmmaking for everyone,” Phahle said.
Wangi Mba-Uzuokwu, Director, M-Net (West Africa), stated that MultiChoice has defined the viewing of local content in Nigeria, West Africa and other parts of Africa through movies running in sub-Saharan Africa, sitcoms that bring laughter to homes, the best of Nollywood and Big Brother Naija among other offerings. She noted that two movies, Brethren and Unbroken, have been produced this year and in keeping up with that tradition, more will be announced in the next two months. She also disclosed that there are three brand new reality show in the works, including one launching in Nigeria next year. “I’m happy to say that our first homegrown reality show will be launching on the 9th of February in Nigeria. It’s a dating reality show for which entries are now open,” she said.
As stated by Phahle, providing subscribers with top-quality international content is also a major part of MultiChoice’s mandate.
“We constantly review our content and channel offering to ensure our audiences are given fresh and exciting content,” she said.

In addition to this wide variety of entertainment content, she added, MultiChoice continues to bring subscribers the best local and international sporting content. MultiChoice, she noted, continues to partner with South Africa’s Professional Soccer League in the ever-popular MultiChoice Diski Challenge, a soccer development programme that offers opportunities to young aspiring footballers to enter the professional league and to those who choose to work behind the cameras as producers of football matches that are broadcast live to thousands of soccer fans.
The event also looked at technological innovations over the past year. These, it was noted, were marked by the use of the latest broadcasting technology, equipment and a skilled crew to deliver world-class broadcasts of the Africa Cup of Nations, the Cricket World Cup and the Rugby World Cup, where SuperSport was one of only four official broadcasters.
“This year marks the point that live-streaming of sports went mainstream in Africa, breaking all-time online viewing records,” gushed Phahle.

Gideon Khobane, CEO of SuperSport, also shared some exciting sports content that sports fans can look forward to in 2020. The sports channel, he said, will be broadcasting “The Match in Africa” – the tennis showdown between two of the greatest players in tennis history, Roger Federer and Rafael Nadal in Cape Town on 7 February 2020. Also on offer will be the Tokyo 2020 Olympics, scheduled to take place from 24 July to 9 August 2020.
In the ever-advancing world of video entertainment, innovation is a key driver of the business. As such, MultiChoice announced a commitment to dedicate resources and the best expertise to ensure it continuously creates platforms tailored to customer needs.
Earlier this year, MultiChoice launched three new self-service apps:  DStv app, GOtv app and DStv’s Self Service on WhatsApp. The company also redesigned its website to ensure a better user journey for customers.

“Ultimately, it is about improving our customers’ viewing experiences by offering value for money, understanding customer preferences, delivering high-quality entertainment and sports content and tailoring platforms for diverse audiences. This also means we need to stay ahead of technology, ensuring that our customers get access to their favourite shows, anytime and anywhere,” stated Phahle.
The last session, hosted by Carte Blanche presenter, Claire Mawisa, included a breakdown across the many series and movies MultiChoice premieres every year. From over 200 blockbuster films produced by Hollywood, it was disclosed, DStv has broadcast more than 95 per cent. The platform also premiered over 90 per cent of blockbuster series premiered over the past year.

Expected to be available in the DStv line-up over the next few months are some of the most interesting documentaries, which would highlight MultiChoice’s desire to broadcast some of the latest and greatest content from across the globe.