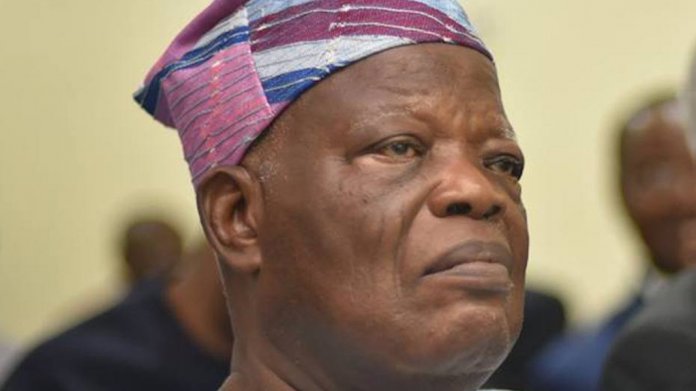 No fewer than seven Ogun State communities on the Nigerian border with Benin Republic, Thursday registered their protest against what they described as undue victimisation, harassment and marginalisation, following the recent border closure.

The communities, led by notable historian who is Asiwaju (leader) of Yewaland, Professor Anthony Asiwaju; traditional rulers, and other eminent indigenes of the zone, narrated various tales of harassment allegedly from Customs officials, policemen, and other security agents.
They also accused the Nigerian government of neglecting them, saying, “The government has been treating border communities in the Ogun West area as if we are not part of the country.”

Presenting the grievances of the locals at a press conference organised by Ogun West Consultative Forum (OWECOF) in Abeokuta Thursday, Asiwaju said, “The border closure enforcement has been made to adversely affect the movement of locally produced fruit like tomatoes; corn, yam, cassava flour and cocoa, from border areas on the Nigerian side.

“The effect has also badly affected periodic traditional Yoruba markets in Abeokuta and Lagos, and even those in Obada, Ojo-Odan and Owode-Idiroko in Imeko/Afon in Yewa North and Ipokia local council areas of Ogun State, respectively.

The don, in lamenting the ordeal of his people, particularly berated Federal Government’s banning of petroleum products from circulating within the border area, thus creating untold hardship for residents on the Nigerian side of the divide.

He said the areas affected were where Nigerian citizens carry out their legitimate businesses, adding that this had led to the collapse of many companies, with its attendant job losses.

“Apart from such small-scale undertakings such as metal and wood works, hairdressing, dry-cleaning, block-making and motoring, all of which require the now banned (petroleum) products…there are also quite a number of large-scale mechanised commercial agriculture and agro-allied industrial projects (in the area).”

Asiwaju, who is an emeritus professor in African Comparative History and Borderlands Studies, particularly lamented how the implementation of the border closure had wound down a multi-million naira, 500-hectare Cassava Mechanisation Project at Idose village in Imeko, which is less than 15 kilometers to the Nigerian border with Benin Republic.

Deploring the border closure, Asiwaju said the federal government should take a cue from Europe that devised what he called policy harmonisation under the European Union (EU), as alternative to border closure by individual countries.
He appraised the situation, saying, “Smuggling has another name; it is called ‘cross-border trade’, or ‘informal trade’, and its biggest name is ‘second economy’.

“It (smuggling) is compelled fundamentally by the law of the economy…If you don’t harmonise policies, which is the vehicle of integration, if you allow the situation to remain as it is now – where what they forbid is what we allow, commodities will still cross borders.”

Owner of the shut cassava company in Imeko, Pastor Felix Afolabi, who recounted his ordeal, said Customs officials had been harassing his workers that were on errand to buy diesel to power the company’s operations, “since petroleum products can no longer be accessed within reach”.

“Right now, I have stopped all the operations, because we cannot get diesel in Imeko and I can’t power my machines. When I sent my people to buy diesel in jerry-cans, security operatives seized the jerry-cans and this kept recurring, thus forcing me to shut down,” he lamented.
Traditional rulers at the forum, also condemned what they described as continued harassment of their subjects, saying, “Simply because we are residents of border communities, which are where God created us to be, they have been criminalisaing and stigmitising us, as if all of us here are smugglers.”

They also lamented government neglect, adding, “We are only remembered during campaign periods; then, they wouldn’t talk of us as a people living 20 kilometres away from the border.”