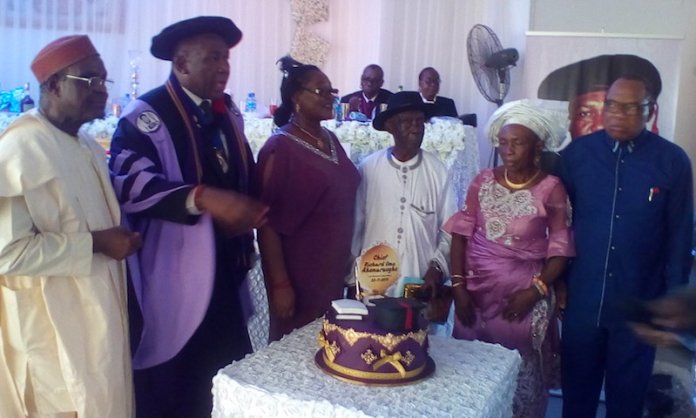 It is a truism and an incontrovertible fact that Chief Richard Oma Ahonaruogho’s life in all aspects and ramifications is service to humanity, irrespective of race, nationality, tribe, religion or gender.

Perhaps, it was in recognition of this fact that the University of Benin Governing Council decided to honour a man who as attested, has been a bridge builder, a philanthropist par excellent, a great ambassador, a model, and goal-getter who has never let a chance pass him by to add value to the university he attended, his professional body ((NBA), his community are unprecedented and legendary.

Testimonies to this achievements are borne by his unceasing network of a robust linkage among alumni of the University of Benin, both in Nigeria and in the Diaspora.

He is described as a great gift to humanity which is an eloquent testimony to the numerous award by diverse interests, including royalty and the University of Benin.

For instance, while reading his profile, the University of Benin Orator, Prof. Eddy Eragbe, described Chief Ahonaruogho as “a man of several parts, who at various times in his adult life has made indelible marks and impacts in the lives of several persons in different facets of life with whom he had interfaced”.

The above description no doubt appropriately captures the essence Ahonaruogho’s person and indeed a resonating and resounding applause that the conferment of Doctor of Law (Honoris Causa) on him by the university became an acknowledgment of his tireless service to that ivory tower, his graduation and the numerous meritorious service in several offices he held in the alumni association, culminating in the establishment of branches in Europe and America and other countries of the world bestowing the appendage “Worldwide” to the University of Benin Alumni Association (UBAA).

During a reception in honour of his new title “Chief (Dr.) Richard Oma Ahonaruogho, because of the honorary doctorate degree in law by the University of Benin, Chairman of the occasion, Prof. Richard Anao, said throughout the greater part he new the honoree and celebrant, it has always been about his philanthropist gestures.

Prof. Anao who was former Vice Chancellor of the university, disclosed that throughout his tenure as vice chancellor, Ahonaruogho was always there to help, proffer solutions adding “he is one of the greatest alumnus of the university”.

Continuing, the former University of Benin boss said: “The honouree today was instrumental to the grand reception organised in my honour when I completed my tenure as Vice Chancellor. He has supported indigent students not only in Uniben but other universities. He is a very large hearted man.”

In his goodwill message, the Chief Judge of Delta State, represented by Justice K. O. Obuh, noted that the period the honoree was at the Governing Council of University of Benin was a great period because he has never been ashamed to identify himself with the university. He added that it was no wonder that today he stands as the first alumni to be conferred with honorary doctorate degree of the university.

There was also goodwill messages from pioneer law class, his classmates at Victory High School, Lagos; and Baptist High School, Ikeja who described the celebrant as delectable man with zeal, zest and energy to attend alumni meetings.

They also acknowledged his investments into the alumni association which no one has equal, describing him as an achiever that will go more places.

The celebrant also hold a chieftaincy title of High Chief Ogwatumise of Owo Kingdom conferred on him and his wife Mojisola in 2006 by His Royal Majesty, Oba David Folagbade Olateru-Olagbegi III, the Olowo of Owo Kingdom, Ondo State of Nigeria who was then the Chancellor of University of Benin.

The reception celebration also coincided with the birthday of Chief Ahonaruogho parents, Chief and Chief (Mrs.) Jeremiah Ahonaruogho who turned 82 and 80 years respectively.

There was also book presentations to individuals and to the University of Benin Faculty of Law by Chief Ahonaruogho.

In his appreciation message, the honouree, Chief (Dr.) Richard Oma Ahonaruogho thanked those who came to celebrate with him, saying celebrations will never depart in their lives.

The Chief who hail from Ughoton in Okpe Local government area of Edo State recalled an interview he granted THISDAY in 2016, reinstating that Late Chief Olasupo Moroundiya, a foremost legal practitioner had been the most influential person in his life.

He said with nostalgia, “My closeness to him gave me a greater insight into life and upon getting married, I had no hesitation to join the church at which he worshiped, the First Baptist Church, Ikeja, Lagos.”