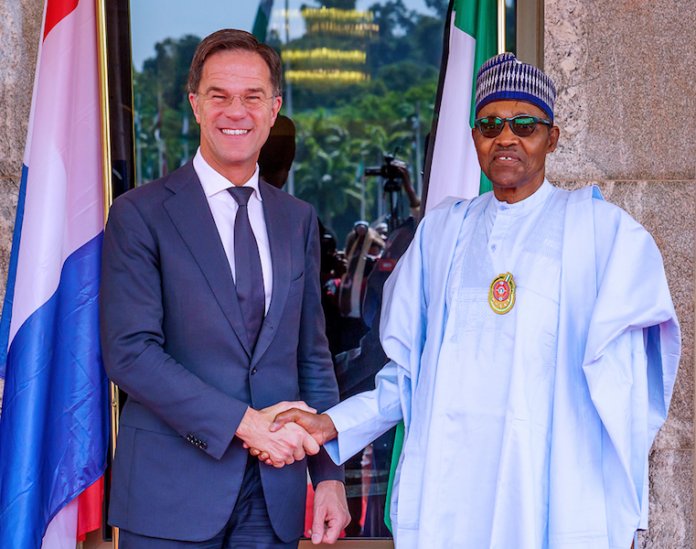 President Muhammadu Buhari and the Prime Minister of The Netherlands, Mark Rutte, have agreed to work together to deepen trade volume, private investment as well as fight human trafficking among others.

Rutte is on a two-day working visit to Nigeria, and is leading a trade delegation of eight Chief Executive Officers (CEOs) of Dutch multinationals currently operating in Nigeria with huge investment portfolios in the agriculture, finance, oil and gas sectors.

According to a statement signed by the Special Adviser on Media and Publicity to the President, Femi Adesina, the two leaders reached the agreement yesterday when they both met in Abuja to discuss bilateral relations between Nigeria and The Netherlands.

A communiqué issued at the end of the meeting revealed that the two leaders reviewed the progress that has been made on the implementation of the Memorandum of Understanding (MoU) on improving the bilateral relations between the two countries concluded and signed by the respective Foreign Ministers in The Hague in July 2018.

‘‘We welcome the steps that have been made to increase bilateral economic cooperation and are happy to see higher levels of bilateral trade volumes as well as private sector investments,’’ the communiqué signed by Nigerian Ambassador to the Kingdom of Netherlands, Oji Ngofa, and the Deputy Head of Mission, The Netherland Embassy in Abuja, Ewout-Jan de Wit, said.

It added: ‘‘The contribution of Dutch private businesses, both global players and small, micro and medium enterprises, to the Nigerian economy is duly
noted.

‘‘Investments by the Netherlands Investment Bank FMO and the Dutch Good Growth Fund are contributing to better access to finance and energy for the private sector.

‘‘Nigeria confirms its commitment to continuing reforms for a conducive business and investment environment while The Netherlands pledges to continue assisting Nigeria for an increase in agricultural productivity, especially horticulture, seed, and sustainable palm oil production.’’

President Buhari and Prime Minister Rutte also reiterated their commitments to the fight against human trafficking, appreciating the close collaboration between both countries in supporting the victims.

Noting with concern the challenging security situation in the West-African sub-region and Nigeria, The Netherlands acknowledged the sustained efforts of Nigeria in the fight against insurgency and in countering violent extremism.

‘‘The Netherlands will continue to provide humanitarian assistance to those in need, particularly women and girls, in order to mitigate the impact of insecurity and displacement,’’ the communiqué said.

After the bilateral consultations between delegations of both countries, Buhari and Rutte witnessed the signing of the MoU on dairy chain development between Royal FrieslandCampina WAMCO and the Government of Niger State.

The agreement on dairy chain development is expected to save Nigeria about $1.2 billion from milk importation annually.

While speaking to State House correspondents, the Dutch Prime Minister expressed delight to make his first visit to Nigeria.

According to him, “It is an honour to be here in Nigeria. It’s my first visit to Nigeria, and like I said at the lunch meeting, I am very impressed. Everything in this country is huge, is big. It is 20 times the size of The Netherlands and more people live in Lagos than the whole of my country.”

He added that from the discussions we had with the business leaders, it was very clear that despite the fact that there are so many differences, the two countries have a lot to offer each other politically, economically or culturally.

“Politically, Nigeria has taken its responsibility as one of Africa’s most important countries by playing a leading role in the region, and by this way expanding democracy in West Africa. I have deep respect for the way Nigeria is doing this including the leadership of the president.

“I also want to express my appreciation for Nigeria’s active role in promoting international law in the International Criminal Court in The Hague. Our countries, Nigeria and The Netherlands, share the belief that international law contributes to a fair and safer world. We are also working together on the issue of migration, and that is why the minister of migration is part of my delegation, and my country is looking forward to continuing this excellent partnership,” he stressed.

On the humanitarian situation in the North-east region, he said: “We discussed at length the situations both in The Netherlands and in Nigeria and also what is happening in the different regions. We try to be involved as much as possible because of the long standing relationship between our two countries.

“We have a very active embassy here, there is a very active ambassador in the European and the Dutch side and from the Nigeria, and we can work together and deal with these issues.”