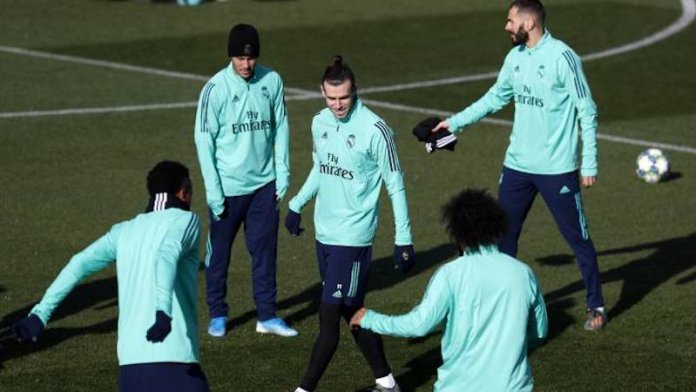 Real Madrid Head Coach, Zinedine Zidane, has said that the former European champions are “not looking to get revenge” when they host Paris Saint-Germain in the UEFA Champions League tonight after a 3-0 defeat in France earlier in the group stage.

Pressure mounted on Zidane after that loss at the Parc des Princes in September, but the 13-time European champions have since enjoyed an upturn in fortunes and sit behind leaders Barcelona only on goal difference in La Liga.

Real can join PSG in securing a last-16 place with victory at the Santiago Bernabeu, or if Club Brugge fail to win at Galatasaray in the other Group A match.

“We aren’t looking to get revenge after what happened earlier in the group,” Zidane said yesterday.

“But we want to play a good game of course and maintain our form.

“It’s the kind of game where you can confirm you’re on a good run. We want to win because we’re at home and we want to play good football.

“I want to see my side play 90 minutes at their best.”

Frenchman Zidane was rebuked by PSG Sporting Director Leonardo earlier this month for comments about a possible move for his compatriot Kylian Mbappe, when he said the Paris forward’s “dream is to play for Real Madrid”.

The 47-year-old made clear again his admiration for Mbappe ahead of Tuesday’s encounter.

“You know that I’ve known Mbappe for a long time and that I’m in love with him as a person because of when he came here on trial a long time ago,” said Zidane.

“Having said that, he’s our opponent and there’s no more to it.”

Real have recovered in the Champions League after also being held to a 2-2 home draw by Brugge in their second game, beating Galatasaray home and away including a 6-0 thrashing in Madrid last time out.

Goalkeeper Thibaut Courtois is hoping the Spanish giants can show how far they have come since the loss in Paris.

“The first meeting with them helped us learn a lot – it wasn’t a good game but we’ve improved a lot lately,” said the Belgian.

“It’s not revenge, more wanting to get one over on another big team who have aspirations to win the Champions League and we need to show how good we are.”

PSG lead Real by five points with two matches remaining and can secure top spot in the group by avoiding defeat.