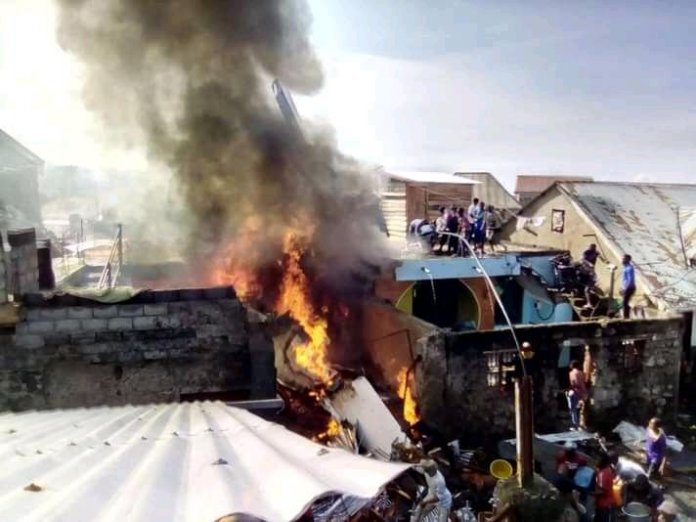 Seventeen passengers and two crew on board have been confirmed dead when a Bussy Bee aircraft, Donnier D228, plunged into homes on take-off in Goma city, eastern Democratic Republic of Congo.

As at press time, it was not yet ascertained the number of casualties on ground but according to agency reports, the governor of North Kivu region, Nzanza Kasivita Carly, confirmed there had been deaths; but was yet to give the number.

Reports indicated that the plane crashed into houses in the Mapendo neighbourhood after losing power from the Goma International Airport.

The flight, which was destined for Beni, 350 kilometres away in the north Goma, came down less than one minute after take-off, according to eyewitness account.

The flight was departing Goma’s runway 17 at 09:10L (07:10Z) but either did not manage to become airborne or lost height after becoming airborne and impacted houses in the densely populated area of Birere, just south of the runway.

The aircraft burst into flames at impact and all souls on board perished in the crash, a number of injuries and fatalities occurred on the ground.

A search for victims both on the aircraft and on the ground is currently underway, a number of fatalities as well as a number of survivors are being reported.

One version of the load sheet identifies six passengers, another version 11 passengers, both papers identify 9S-GNH as the accident aircraft on November 24, 2019. The names of the first paper appear on the second paper, too, however in a different order.

The airport reported the aircraft departed with 17 passengers and two crew, all occupants have been killed in the crash.